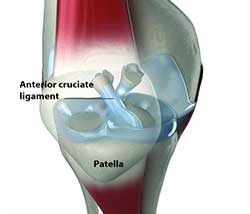 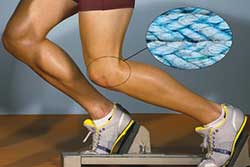 A new twist in knee repair. It is well known among skiers and football players that the anterior cruciate ligament (ACL) can be torn. This can be devastating, since the ACL literally holds the back of the knee together. Conventional artificial replacements for the ACL substantially under-perform the original ligament, but a new approach uses interwoven fibers — like a braided rope — to achieve a more natural response.

When I heard that the APS was proposing a new journal, Physical Review Applied, it seemed to me self-evident that the one thing we don’t need is more journals. New journals appear monthly, providing increasing amounts of noise (in the form of low-quality papers) that dilute important signals (high-quality science) made by serious researchers. Moreover, there obviously are already strong applied physics journals, and I didn’t feel that science would benefit from a fast-food philosophy: The presence of a McDonalds is justification to put up a Burger King next door. The natural question then is, what possessed me to become editor of Physical Review Applied?

The simple answer is that despite the excess of noise provided by what I call value-subtracting journals, there is a very real and significant gap at the intersection of physics and engineering that I believe needs to be filled, and as a consequence, many APS members doing important, valuable, and frankly very beautiful research have no publishing home for their work.

Speaking for myself, I am trained as a mathematical physicist, but I work in biomedical engineering. I have published in both engineering and physics journals, and I have found that whichever category of journal I choose, colleagues from the other category seldom learn of that work. I am certainly not alone in this: I know many physicists whose research involves eminently applicable topics, and they consistently bring elegant and useful ideas to the verge of realization, but struggle to go further for want of industry contacts and engineering knowhow. Likewise, I work daily with engineers who study useful and important problems that are physics through and through, but who publish in journals that are rarely read by physicists.

I’ll give examples shortly, but coupled with these substantive gaps are cultural and semantic gaps between physics and engineering communities. Some of these lead to almost comical misunderstandings, as when an engineering colleague discussed “dispersion” with me and I was baffled because I couldn’t understand what a relation between frequency and wavelength had to do with dissolving pharmaceutical tablets.  I now know that engineers seldom deal with dispersion relations, and instead use dispersion and diffusion (almost) interchangeably.

On the other side, when I speak of “autonomous” systems, my bioengineering colleagues look at me with puzzlement — because they are thinking of autonomous robots and would call my system “endogenous.” Similarly, to physicists “translation” results from linear motion, but to engineers this means bringing a technology to market — and a physicist could be forgiven for thinking that “systems biology” describes how systems of cells, organs or organisms interact, whereas in bioengineering it refers to (usually informatic) studies of how genes and proteins regulate cell functions.

More fundamentally, I have had several collaborations with bioengineers that took off only after several hours of recalibrating our understanding. One example: I have been trained to reason by forward chaining — making a hypothesis and deriving results — while my bioengineering colleagues tend to work by backward chaining–observing a phenomenon and dissecting it. And don’t even get me started discussing “balance,” which engineers use to describe anything from mass conservation to Newton’s second law.

Despite this culture gap, physics-engineering collaborations that do take hold are enormously rewarding and productive. There is no shortage of examples. GPS is entirely based on physics, but has been introduced into our phones and cars by electrical engineers. Robotic surgery has revolutionized delicate operations, and could not exist without major contributions by physicists alongside mechanical, electrical, and biological engineers. The same is true of high-resolution tomography, confocal and convolution microscopy, and essentially every single part of a laptop computer, from memory to processor to display to mouse to touch-screen. All of these technologies have resulted from collaborations between physics and engineering, and the pace of similar developments is certain to accelerate in the future.

This is the raison d’être of Physical Review Applied: to promote the publication of the highest quality papers at the intersection of physics and engineering, and to provide a forum for researchers at that intersection. There is a pressing need to fill the physics-engineering gap. It took more than three decades for Isidor Rabi’s work on nuclear magnetic resonance in the 1930s to be developed into the first magnetic resonance images in the 1970s. The same is true of Gorilla® Glass: universally used in cellphone and computer displays today, this was developed using long-established methods of physical chemistry in the 1960s, but wasn’t engineered into a device until the 1990s. We can’t predict what physical ideas will evolve into which engineering applications, but we can all agree that while a 30-year wait may have been needed in times past for technology to catch up with science, 30 years is too long to wait today.

In the presence of this need, the distraction presented by value-subtracting journals is unfortunate, but my interactions with engineers have led to the most rewarding, valuable, and downright fun collaborations that I have had, and I am convinced that a journal bringing physics and engineering together will add value far beyond what we might anticipate at first thought. Let me close with a small sampling of examples of problems to illustrate this point.

Example: A colleague of mine recently developed a ceramic that sequesters carbon dioxide — indeed, it doesn’t just do this passively, it uses carbon dioxide in a reaction to solidify the ceramic. This is a terrific vision, right? But it was developed by a materials engineer, and in the ordinary course of events it would be published in an engineering journal to be discovered, only eventually, by physicists for broader research and analysis.

These ceramics can sequester up to 20% of their mass in CO2 and produce strengths superior to Portland cement. But what allows this new material to attain this strength? What fraction is due to chemical versus physical bonds? Could we pave highways that absorb 50% CO2 by weight? What is the theoretical limit to the material’s strength? What other materials could be designed to sequester CO2?

These questions involve fascinating and important materials science. But currently the separation between physics and engineering publications prevents physicists from even finding out about examples like this, except by chance. We need a forum for physicists to learn what the most current engineering research is producing — and what physics is needed to solve pressing technological problems.

Example: Artificial ligaments are known to be greatly inferior to natural ones because under repeated strain, the artificial materials plastically deform, leading to looseness in the joint — a completely unsatisfactory property for a knee ligament. I have another colleague who is taking advantage of the elegant idea that braids in an artificial ligament tighten when stressed to prevent the unwanted fibers from stretching at low stresses. This is a useful, beautiful, and totally physical idea–one that again deserves a forum for both physicists and engineers to appreciate and build on.

Example: In recent years, three independent groups have shown that absolutely identical materials, brought into symmetric contact and separated, spontaneously produce charges that grow with repeated contacts. The cause of this symmetry breaking is unknown, as is the mechanism for charge transport in these insulating materials. The buildup of charges is of practical importance because charging of identical materials is believed to be associated with lightning in sandstorms as well as industrial dust explosions that kill dozens of workers annually. So this problem involves both fundamental physics and very practical implications.

Yet only a handful of scientists are aware either that there is a major hole in our understanding of basic charge transport mechanisms or that this hole has important implications ranging from the geosciences to industry. In large part, I would argue that problems of this kind aren’t recognized or appreciated because research crossing the physics-engineering divide has no publishing home. Contact charging is discussed in one place, sandstorms in another, and industrial hazards in yet a third. Moreover, an analysis of the implications of contact charging for geosciences and for industry would have a hard sell to get published in any one of those three places.

This is only a small set of the examples that I happen to have encountered, but there are many more and we plan to publish papers in a wide range of topics (see the Physical Review Applied about page). Based on these examples alone there seems to me to be a compelling case for a journal that bridges the artificial divide separating physics from engineering, It seems equally certain to me that providing such a journal can only strengthen both disciplines. Our goal is to provide a publishing home for scientists and engineers whose work crosses that divide. Plus we intend to make better burgers.

Troy Shinbrot is Professor of Biomedical Engineering at Rutgers University and Editor of Physical Review Applied. His training is in mathematical physics, with a PhD in nonlinear control, and his research involves soft matter and biological morphogenesis. Shinbrot has a longstanding interest in scientific ethics and engineering writing, both of which he teaches for entering graduate students.