Jack Sandweiss Looks Back on 25 Years at PRL 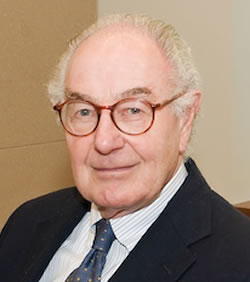 Ed. Note: As Jack Sandweiss, the Donner Professor of Physics at Yale University, prepared to leave office after a quarter century as the senior editor of Physical Review Letters, he took time to reflect on his experiences in an interview with Michael Lucibella of APS News.

Q: How has the journal changed in the 25 years you’ve been there?
A: It’s grown a lot, but it hasn’t changed in a fundamental sense. If anything, the standards have probably increased slightly. Our acceptance rate used to be something like 40%, and now it’s a little under 30%. PRL has gotten bigger, but its basic philosophy hasn’t changed. The other thing I would say about it is we’ve somewhat broadened the areas that we call physics. For example, when I started, something called soft matter physics (polymers, foams, gels, that kind of thing) did not have its own separate section but the subject grew in the physics research world quite a bit, and now we have a section on soft matter and other related things.

A couple of years ago we had a big effort to raise the standards because we thought the journal was just getting too big. We did actually succeed in raising the standards. We sent an email to all the authors and referees, had meetings with the divisional associate editors and so on, and we made a more precise definition of what a paper should be if we wanted to publish it in PRL.

Q: What can you say you’ve contributed to the journals?
A: Mostly it’s a sort of day-to-day thing. One of the things that I do is the handling of appeals. The paper comes in, editors send it through referees, referees make comments, editors read them, and they make a decision. An author who does not like the decision can appeal to the divisional associate editor, what we call the DAE. I’m the chairman of the DAEs, so that’s also one of my activities. A lot of papers are perfectly good papers, but they’re just not important enough to put in PRL.

What the journal should publish are the papers that you cannot afford to miss in your field. One of my colleagues became the dean of a graduate school, so he had to cut back on his research, but he still could read PRL every week and he didn’t have a big thing that he missed. He had to do a lot of homework when he came back, but he knew the main things that happened in the field. And that’s the test that we want to make of the papers.

When we have to hire new editors, I’m involved with deciding whom to hire. And I’m also involved with the general policy of the journals. The editor in chief is mainly involved with that, but I’m part of it. For example, some years ago when we went electronic, I was very active in helping to do that because I think it was a very good thing and I was part of the small group that hired the first head of our technical information division.

Q: How did you first come to PRL?
A: I always read it, and we published in it, so I knew about the journal perfectly well. And my colleague here at Yale, Robert Adair, had been the editor. He knew me and actually recommended me. There was a period when they didn’t have any outside editor, they only had the in-house editors, and things didn’t go so well. They needed that sort of stabilizing and professional view from the field. Adair recommended me, and the APS President, I think it was Val Fitch at the time, called me and asked if I would do it I thought about it and I said I have a fair amount of interest in broad areas of physics, apart from my own research, so I said I would do it. Once I got into it, I got into it. It’s really quite a wonderful journal. We try hard to maintain it.

Q: Looking to the future, is it in danger of losing its premier position to Scienceor Nature?
A: I think it’s changing. Science and Nature had more established “points” because they have a tremendous history. But they cover all of science. You get one or two [physics] papers there maybe a week. PRL publishes 70 or 80 papers a week. Science was always important, but it was so small it really didn’t have a big effect.

Nature, recently, has started what we loosely call “Baby Natures ”: Nature Condensed Matter, Nature Photonics, Nature everything, there’s a whole bunch of them. Those are new journals, they don’t really have the history of the real old Nature, and in some ways we don’t think that their quality is quite so optimal, but they do have the cachet of having the title Nature, so we are concerned that we might be losing good papers to them.

We are trying to do things to make PRL have more visibility. APS started a website called Physics to highlight research published in our journals. It publishes “Viewpoints,” which are written by people in the field, but not the author of the paper. It’s quite a feather in your cap to get a “Viewpoint” written on a paper that you published in PRL. We also have other things called “Synopses,” which are short pieces written by the editors themselves on interesting papers, and in the journal we added a feature called “Suggestions.”

Q: What kind of characteristics do you think your successor should have?
A: I think he or she should be interested in the journal and have a breadth of interest in a range of physics. That’s important because the journal covers lots of different things. An interest in the publication world, publications, referees, adjudicating problems and so on, that’s something one should have an interest in and want to do. I write a lot of letters. For all of the papers I accept or reject, usually reject, I write a long letter to the person and explain that their thoughts were considered and they were evaluated, in perhaps not quite the way that they would have liked, but with consideration for their point of view. You have to write reasonably well, otherwise you could create a lot of people angry with the journal, which is not a good thing to do.

Q: Are you optimistic about the future of the journal?
A: Oh yes, I’m very optimistic. The reason why such journals are important is that there’s a huge array of publications in physics. If you look at the ArXiv for example, in your own particular area, where you know the people well and the work well, you can perhaps pick up things that you should look at. But the minute you go the slightest bit away from that, you’re overwhelmed with a huge number of papers you don’t know what to do with. If you look at PRL, you know that these papers have been selected and reviewed and refereed, experts don’t think there’s anything wrong with them and they’re credible and they’re something worth knowing. That’s a huge value to the reader and to the science community.

Another thing that is on the horizon that I think shouldn’t really be for physics, is “Open Access.” The driver in open access is the medical profession. If someone does a big test on some new drug, anybody can, in some sense, get an idea what that showed. I never yet have found a person in my everyday work that’s dying to know the next article in Phys Rev Letters. It is in some sense a specialized addiction for physicists. I don’t think that there is any real need for open access in physics, but nevertheless the idea has caught on and there are people who have religious ideals about it, but many of them don’t actually realize that publishing a refereed journal costs money. You have to pay editors, you have to have a system, and you have to have a whole technology operation working. In a sense, open access doesn’t make it free, it means, “Who will pay?” The main thing, which is the only way that it’ll work, is if the author pays. That of course depends on the author’s income, which usually comes from some grant. I think it’s better to keep it the way it is, for us anyway. That is of course a journal-wide problem, and I take part in the discussions on it, but in the end it’ll be the APS management that decides what to do with it, the editor in chief and the treasurer/publisher and so on. But I imagine that for a long time we will try to keep our library subscription policy as the main means of supporting the journals.