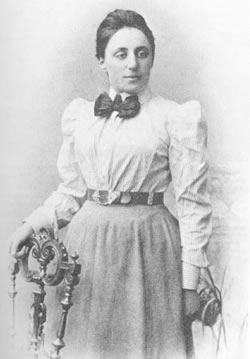 One of the most significant 20th century mathematicians is also one of the most obscure when it comes to public recognition: Emmy Noether, whose work provided a fundamental connection between symmetry in nature and the laws of conservation.

The eldest of four children, Noether was born on March 23, 1882, in Erlangen, Bavaria, and showed an early aptitude for logic when she quickly solved a brain teaser at a children’s party. Her father, Max, was a mathematician who taught at the University of Erlangen, where Emmy eventually enrolled. Initially, however, she studied French and English and qualified to teach those languages at girl’s schools.

She soon changed her focus to mathematics, however, enrolling at her father’s university. She was one of only two women students; just two years prior, the school’s Academic Senate declared that allowing women to enroll would “overthrow all academic order.” In fact, Noether was allowed only to audit classes, and then only after acquiring permission from the professors to attend their lectures. But it was sufficient to enable her to pass the graduation exam in 1903 and qualify for the equivalent of a bachelor’s degree. She spent the next year studying at the University of Göttingen, but returned to Erlangen when the university finally revoked the restrictions on women students, completing her dissertation on invariants for ternary biquadratic forms in 1907.

While the university may have relaxed its restrictions on women students, it continued to exclude women from holding faculty positions. Noether taught at Erlangen for the next seven years with no salary, sometimes substituting for her father. David Hilbert sought to bring her into the mathematics department at the University of Göttingen in 1915, but other faculty objected. “What will our soldiers think when they return to the university and find that they are required to learn at the feet of a woman?” one professor complained. Hilbert was indignant. “I do not see that the sex of the candidate is an argument against her admission,” he retorted. “We are a university, not a bath house.” Instead, Noether lectured there unofficially under Hilbert’s name for the next four years without pay; her family provided living expenses.

Noether is best known for her contributions to the development of the then-new field of abstract algebra, as well as ring theory. But one of the reasons Hilbert pushed to bring Noether to Göttingen was the hope that her expertise on invariant theory –numbers that remain constant even though manipulated in different ways–could be brought to bear on Albert Einstein’s fledgling theory of general relativity, which seemed to violate conservation of energy.

Noether did not disappoint, devising a theorem that has become a fundamental tool of modern theoretical physics. One of its consequences is that if a physical system behaves the same regardless of its spatial orientation, the system’s angular momentum is conserved. Noether’s theorem applies to any system with a continuous symmetry. When Einstein read Noether’s work on invariants, he wrote to Hilbert: “I’m impressed that such things can be understood in such a general way. The old guard at Göttingen should take some lessons from Miss Noether. She seems to know her stuff.”

As World War I ended, the German Revolution of 1918-1919 resulted in improved rights for women, and the University of Göttingen relented a little in its stance on women faculty, eventually granting her an untenured professorship. Noether even received a small salary beginning in 1923. She never did achieve the rank of tenured professor, however, nor was she elected to the Göttingen academy of sciences, despite her academic accomplishments.

Noether rarely followed lesson plans in her lectures, preferring spontaneous discussions with her students, and often became so passionately engrossed in the subject that her hair came loose. She showed unusual devotion to her job, once teaching class at a local coffee house when the building was closed for a holiday. Most of her students were male, dubbed the “Noether boys,” although Noether mentioned her pleasure, upon meeting Czech mathematician Olga Taussky, that more women were pursuing studies in the field.

The rise of the Nazi government brought an end to Noether’s academic career in Germany with the enactment of a law to remove Jews from government and university positions unless they had proven their loyalty to Germany by serving in World War I. (One student protester proclaimed, “Aryan students want Aryan mathematics, not Jewish mathematics.”)

Noether was among the first to be dismissed from the University of Göttingen. Initially, she gathered students at her home, but eventually was forced to flee Germany, along with many other Jewish academics in Germany. She wound up taking a position at Bryn Mawr in the United States in 1933. She also lectured at the Institute for Advanced Study in Princeton, although she felt less welcome at Princeton, describing it as a “men’s university where nothing female is admitted.”

Her new life in the US did not last long. In 1935, doctors found a tumor in Noether’s pelvis, and during surgery uncovered an ovarian cyst and two smaller tumors in her uterus. Although the surgery was successful, Noether died of complications four days later at 53. One of her physicians thought her death may have been due to “some form of unusual and virulent infection.” Friends and associates held a memorial service a few days later. Her ashes were buried under the walkway in the Bryn Mawr library’s cloisters. Einstein wrote to the New York Times after her death, declaring Noether to be “the most significant creative mathematical genius thus far produced since the higher education of women began.”