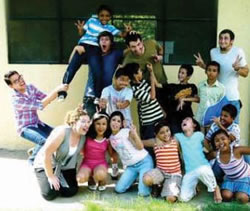 Giulio Rottaro (far left) enjoys a light moment with his students in Honduras.


When I was younger I had the privilege of going to a school with plenty of resources. If my biology teacher said that all living things are made of cells, she had a microscope and some slides and she could prove it. Only after being a teacher for a year have I come to understand how important those resources are in scientific education. I used to think that those little simple experiments and demos were just neat gimmicks that were complementary to my scientific education, but I am starting to believe that they WERE my scientific education.

In 2010 I took a year off school to volunteer as a bilingual teacher in a small town in Honduras. I was assigned the position of resource teacher where I would pull underperforming students out of class for one-on-one or small group sessions. This position gave me a great viewpoint from which I could observe how all the subjects were being taught at all grade levels. The first and second graders learn about measuring and simple words like “hot”, “cold”, “solid”, “liquid”, ”gas”, etc. Third and fourth graders learn about the water cycle, the difference between natural and artificial, rocks, etc. The fifth and sixth graders learn about the scientific method and more complex ideas. And finally the middle schoolers learn biology, physical sciences and earth science, in that order.

I had no prior teaching experience so my understanding of education was only from the perspective of a student. I figured that science education could be divided into two elements: language and concepts. First you teach the student about the language of science and then you apply that language in teaching them concepts. But there is a third element that is the most important for both students who will go into sciences and students who will not: intuition.

For students from this predominantly agricultural nation it is easy to develop their Naturalist Intelligence, one of the nine types of intelligence accepted by educational theorists. It’s not rare for the students to lend a hand on their parents’ or grandparents’ farms or for students to have fruit trees at home. Given their love of soccer there are also plenty of students with Bodily-Kinesthetic Intelligence. I took this as evidence that my students could indeed learn subjects to the point of intuition. So I tried to identify the aspects that allowed them to learn these skills and bring them to the classroom.

That’s when I realized how important those little experiments and demos are. Not only are they fun for the students, they actually teach intuition through experience. Unfortunately, without beakers, hot plates, scales, multi-meters, etc. we had to get creative to come up with experiments. For a second-grade lesson on the water cycle, I dragged a skillet and a propane tank into the classroom, boiled some water on a pot and condensed it on a cool glass above the pot. The children all held their hands above the pot and felt the steam rise. They noticed the water level dropping and the condensed water building up on the glass. For a fifth grade lesson on the large intestine we used water and powdered drinks, and we reenacted peristalsis like a play out in the school’s auditorium. I called that one “The Poopopera Lesson”.

When it came time for the middle school science fair, the students’ intuition shortcomings became very clear. Because of the lack of resources, especially when these students were in primary school and the school had just been founded, they were unable to intuit the answers to their science-fair problems and therefore got stuck in the hypothesis step of the scientific method. A lot of students traced back and tried to find a new question that was closer to their comfort zone. This was obviously not a valid problem-solving strategy. For example, a student wanted to create a man-powered electrical generator but he was unable to intuit how the magnets may interact with the coil or even with each other. (Nowadays our kindergarten and pre-k students play with magnets on a daily basis.)

Thanks to the hard work of the middle school science teacher and some of my help, the science fair was a huge success and most projects were quite impressive. However the obstacles that were encountered highlighted another aspect of the importance of experienced-based science learning. A lot of the students had difficulties learning the difference between anecdotal evidence and empirical research, not only because they are kids who have been taught to believe everything their elders say, but also due to the fact that they live in a small third-world town where the main source of information is hearsay. By performing their own experiments in the classroom, the students familiarize themselves with how the scientific method works and they also learn how to question it. While presenting their results, two fifth graders who were assigned to determine whether candles float or not, realized that they should determine if lighting the candles would make a difference. Students also learnt the importance of repetition and replicability. Next time they hear from a family member that the humans have been infecting the chickens in the farm, they can challenge that assertion and ask for evidence.

Now that we have enough momentum to write our own customized science curriculum going into the new school year, we can carry these lessons forward and hopefully address the issues. Some Caltech undergrads have generously donated some lightly used lab equipment, and we can start adding more awesome experiments. To all you APS readers out there, if you know of any noteworthy and resourceful experiments that could inspire curiosity among my students, I am all ears. And yes, we already built a Rubens’ tube.

Giulio C. Rottaro graduated from Caltech with a BS in Physics this past June. During the 2010/2011 academic year he volunteered with Bilingual Education for Central America (BECA: www.becaschools.org) as a resource teacher for San Jeronimo Bilingual School. He is now in his first year at Yale School of Medicine.