US Students Among the Best at International Physics Competition 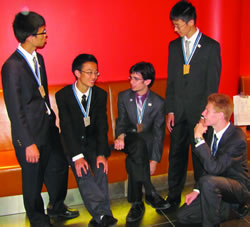 Just before the Olympic Games started in London, young teams of students from around the world converged in Estonia for the 43rd annual International Physics Olympiad. All five members of the US Physics traveling team earned at least a silver medal at the competition, and the team’s combined three gold medals and two silver medals garnered a 4th place finish in the unofficial medal count. China and Taiwan tied for first place, Singapore took the next spot, and the US tied for 4th with South Korea and Russia.

Medals and honorable mentions were awarded in tiers based on a student’s percentile score on theoretical and experimental exams. Students could also earn a number of special prizes for outstanding individual performances.

Almost 400 students representing over 80 countries competed between July 15th and 24th. US team member Eric Schneider’s strong individual performance ranked third overall and earned him a special prize for the most creative solution to a theoretical problem.

“Without a doubt, these [problems] were harder than any theoretical questions we’ve had in about a decade,” said head coach Paul Stanley.

Only about 30 students earned more than 50 percent credit on this “most difficult” theoretical question, according to Stanley. Although many students struggled with this problem, Schneider followed unique paths to his solutions, achieving almost full marks that led to his special prize.

“He was able to find an elegant approach instead of brute forcing like a lot of people might have,” said team coach Andrew Lin.

Students didn’t travel to Estonia solely for their exams, however. For the rest of the trip, the teams mingled while exploring cultural and tourist sites throughout the country. Outside of the classroom, the students visited coastal islands, a meteor impact crater, surviving medieval towns, and an outdoor adventure park.

The sporting mood of the London Olympics even drifted east toward Estonia, and the students competed in a friendly international soccer tournament. Students on the team truly enjoyed the opportunity to speak with their international peers in a relaxed setting, according to Stanley.

Lin experienced similar opportunities as an alumnus of the 1998 and 1999 US Physics Teams. After traveling as a coach with the team this year, Lin now has a more nuanced perspective on the competition.

“It was really interesting to see how it has grown and also to see it from the leader's point of view,” said Lin.

Over the years, competition has stiffened as more teams have joined, but the US has consistently performed at a high level. During his roughly ten year tenure as academic director, Stanley estimated that the highest team performance was third place, so this year ranks among the best US results since the team first participated in 1986.

The American Association of Physics Teachers and the University of Maryland are responsible for recruiting and training the US team every year with financial support from over a dozen organizations, including the APS.