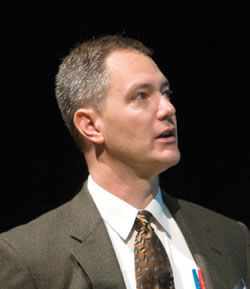 Kevin T. Pitts is the associate head of undergraduate programs and a professor at the University of Illinois.  He is an experimentalist currently active on the Collider Detector and muon g-2 experiments at Fermilab. Pitts became interested in advocacy during the 2007-2008 fiscal year when, as chair of the Fermilab executive user’s committee, federal funding for high energy physics was significantly cut.

During that time, Pitts worked with the APS DC office and authored a popular piece in the Chicago Tribune, led letter writing drives and participated in congressional visits. Currently, Pitts maintains a general physics outreach blog, which discusses policy among other topics. He recently published an op-ed in the Champaign Urbana News-Gazette discussing the need for a congressional “champion of science.” While not all op-eds reach lawmakers ears, Pitts said “I was encouraged to hear a response from my senator’s office” regarding his call for science champions.

Op-Ed:  "Our next congressman can be a champion of science"