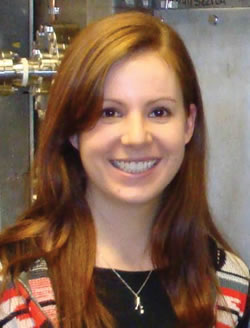 Scientific research can take on a whole new perspective when seen from the halls of Congress. APS’s 2010/2011 Congressional Science Fellow, Laura Berzak Hopkins said that working in the House and Senate gave her valuable insights as to how the lawmaking process works, and how scientists can get involved.

Hopkins did her doctoral thesis work at the Princeton Plasma Physics Laboratory. There she worked on diagnostic systems for Tokamaks, data acquisition systems and data analysis. When finishing up her thesis, she heard about the APS Congressional Fellowship, which intrigued her because it seemed like a good way to combine her interests in science research and communication. From the start, working with lawmakers proved to be wholly unlike working with ionized particles.

“It was a different experience from research,” Hopkins said, adding that she found there was a much greater variety of work in Congress compared to a lab. “One day I might be accompanying my boss to do a speech or give an interview, and the next day I might be going to meetings with different interest groups.”

Hopkins spent the first half of her year in Congress working at the House Foreign Relations subcommittee on terrorism, nonproliferation and trade.

“I focused primarily on nuclear cooperation agreements and the current status of what some of the legislation is,” Hopkins said.

After the midterm elections, the leadership of the House changed, along with all of its staffing, so she went to work for the office of Sen. Kent Conrad (D-ND). There she found her background in scientific research was put to use on energy issues like ethanol credits, comprehensive energy legislation and coal ash disposal regulations. In March, after the earthquake in Japan, she was able to rely on her training as a plasma physicist to explain some of the workings of the unfolding Fukushima disaster.

“I was primarily explaining the background of what is a nuclear power plant, is it a nuclear weapon, what is a spent fuel pool,” Hopkins said. “A lot of the issues related to nuclear energy were right in line with my work.”
She added also that not only was her technical training itself a boon while on Capitol Hill, but the research skills she developed while pursuing her degree were as important to her success.

“It sounds trivial but I think it’s a skill that scientists really hone in their daily research activities,” Hopkins said.

She pointed to issues that she worked with on the Hill, including energy and pollution, as areas where scientists can have a lot of meaningful input. However she said she was a bit dismayed that more scientists and researchers don't get involved in the lawmaking process.

Bringing scientific expertise to lawmakers is one thing, but Hopkins is also as passionate about sharing science with the public. Throughout college she gave public talks and helped with other outreach activities.

“I’ve always been interested in not only doing the science, but… in showing people why I’m excited about science,” Hopkins said.

She’s kept up her passion for bringing science to the public. This year, Hopkins received an APS Outreach Grant to set up a website to let scientists show off their research to the public. The website, titled “WhySci,” will host short explanations of the work done by scientists. Written by the researchers themselves, Hopkins will help edit the descriptions by getting science journalism students involved as well.

Hopkins is still weighing her options for the future. Right now she’s at Princeton’s Woodrow Wilson School of Public and International Affairs program on Science and Global Security. She said she’s thinking about getting back into physics research, but hasn’t made any concrete decisions yet.