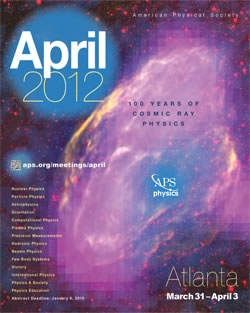 
Physicists from all over the world will soon be converging on the Peachtree State as this year’s April Meeting is being held at the Hyatt Regency in Atlanta, Georgia from March 31 through April 3. The meeting will draw more than 1,000 physicists to share the latest results in particle physics, nuclear physics, astrophysics and plasma physics research. There will be 234 invited speakers and a total of 165 sessions as well as three poster sessions. In addition, the Sherwood Fusion Theory Conference will take place in conjunction with the meeting.

This year marks the 100th anniversary of the discovery of cosmic rays, and in celebration the meeting’s theme is “100 Years of Cosmic Ray Physics.” The meeting will kick off on Saturday morning with the Kavli Foundation Keynote session about the history and current research into cosmic rays. Leading off the session, Alan Watson from the University of Leeds will take the audience through the 100-year history of cosmic ray research and how it has impacted numerous fields of physics. Ellen Zweibel from the University of Wisconsin–Madison will highlight current research into the understanding of cosmic ray plasma physics. Nobel laureate Samuel C.C. Ting from MIT will bring audiences up-to-date on research being conducted by the Alpha Magnetic Spectrometer onboard the International Space Station.

Nobel Session
Monday morning’s Nobel session promises to be engaging and enlightening. Two of the winners of the 2011 physics prize, Saul Perlmutter from the University of California, Berkeley and Adam Reiss from Johns Hopkins have both been invited to speak about their discovery that the expansion of the universe is accelerating. One of the 2004 Nobel laureates, Frank Wilczek of MIT, will discuss the implications that a potentially low-mass Higgs boson will have for theories of supersymmetry (Session P1).

Plenary Session
The third plenary session of the meeting, on Tuesday morning, features a range of topics. Krishna Rajagopal from MIT will describe how string theory is being used to describe the properties of hot quark soup at RHIC and the LHC. Zheng-Tian Lu from Argonne National Laboratory will highlight how laser-based atom traps are being used for Atom Trap Trace Analysis which could enable researchers to develop an effective method of krypton-dating groundwater and ancient ice. Judith Curry from the Georgia Institute of Technology will talk about how the Berkeley Earth Surface Temperature Project has brought together more than a billion historical temperature readings from around the world to produce a method to more accurately calculate the history of global climate.

Neutrino Research
New neutrino results are big at this year’s meeting. Bradford Benson from the University of Chicago will present the first evidence of a 4th generation of neutrino discovered by the South Pole Telescope (Session W3.02). Recent results from the Daya Bay Experiment which uncovered the value of the theta one-three mixing-angle of neutrino oscillations will be presented in session G10.

Gravitational Waves
The hunt for gravitational waves continues, and session L6 will bring focus on new developments in the various searches as well as efforts to further refine general relativity. Nicolas Yunes of Montana State University will give an overview of his work developing new devices to look for evidence of gravitational waves around binary star systems. Later, John Conklin from Stanford University will present the latest results from the Gravity Probe B mission, launched in 2004.

Energy for the Developing World
As renewable and green energy becomes more affordable, physicists have been working on ways to bring cleaner energy to the world’s poorest billions. Ashok Gadgil from the University of California Berkeley will share his work developing a cheap, energy efficient and low carbon emission biomass stove for use by displaced people around the world. Kurt Kornbluth from the University of California at Davis has been developing inexpensive solar powered lights for unelectrified houses and huts. Jeffrey Nelson and his colleagues at Sandia National Laboratories have developed what they call “solar glitter,” a new way of creating photovoltaics made from crystalline silicon that uses much less semiconductor material, but maintains its efficiency (Session H6). The second session of the series looks at power generation at an industrial scale. Chris Lyons from Solar Turbines Incorporated will talk about how to generate electricity using already existing biomass and other wastes. Trudy Forsyth from the National Renewable Energy Laboratory will show the promise that wind power holds for developing nations (Session J12).

Nuclear Detection
Warren Stern from the Department of Homeland Security will highlight some of the recent developments in radiation detection technology. Michael Kuliasha from the Defense Threat Reduction Agency will focus on overarching strategies being employed by the United States to reduce the threat of nuclear terrorism and proliferation. Michael Larson will describe the history of the Nuclear Emergency Support Team, a team trained to respond to any kind of nuclear incident in the country (Session Q5).