Fiscal Year 2013 Presidential Budget Request
The Obama Administration released its budget request for Fiscal Year 2013 (FY13) on Monday February 13th. Overall, the request reflects a Washington atmosphere of curtailed government spending, one in which budget increases are rare. Recognizing its impact on innovation and future economic growth, the White House made science one of the few beneficiaries of a general increase The major science agencies and their requests follow: 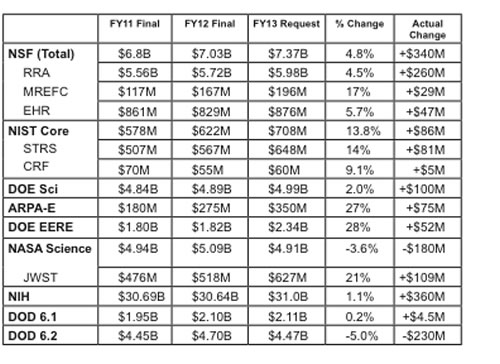 Congress will begin consideration of the Fiscal Year 2013 budget shortly, with a number of hearings already scheduled to examine the President’s request. Even if Congress accepts the proposed spending for science, appropriations for the coming fiscal year will be subject to across-the-board sequestrations, scheduled to take effect on January 2nd 2013. The last edition of the Dispatch provided sequestration details: in brief, defense appropriations would suffer an 11% reduction, and every non-defense discretionary account would lose about 8%.

It is unlikely that Congress will pass many or any of the twelve appropriations bills until after the November elections. And, depending on the outcome at the polls, lawmakers could decide to leave spending legislation for the new Congress or simply pass a yearlong continuing resolution, funding Federal agencies at Fiscal Year 2012 levels with sequestrations applied to them.

Be sure to follow the APS Washington Office for the latest news on the FY13 Budget:

The year 2012 promises to be a busy one for the Panel on Public Affairs. Work has begun to generate several study proposals whose topics include licensing nuclear reactors to 80+ years, the technical aspects of verifying tactical nuclear weapons reductions and science-backed federal standards.

A study for the Department of Homeland Security’s Domestic Nuclear Detection Office (DNDO) regarding trends in nuclear and radiological detection is also being considered. If pursued, POPA plans to add expertise by collaborating with IEEE-USA on the study.

If you have suggestions for a POPA study, please send in your ideas electronically. http://www.aps.org/policy/reports/popa-reports/suggestions/index.cfm

Roll Call printed an op-ed titled, “Smart, Not Fat, Cats Fuel Economic Growth” on January 30th by Michael S. Lubell, APS Director of Public Affairs. The piece pointed out that research scientists fuel economic growth in the U.S., and that they require “patient capital” and “dependable policies” to be successful.

Dot Earth, a New York Times blog, published an op-ed February 2nd by Nobel Laureate Burton Richter, who responded to a previous piece published in The Wall Street Journal on the topic of climate change.

The Wall Street Journal published a letter-to-the-editor on February 6th by APS President Robert L. Byer who wrote that the APS Statement on Climate Change had been inaccurately characterized in a recent op-ed published in the newspaper.