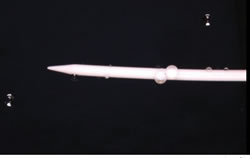 Science off the Sphere

Don Pettit, an astronaut aboard the International Space Station, is creating videos of microgravity physics experiments that will appear on the APS outreach website PhysicsCentral. Under the terms of a NASA/APS partnership named Science off the Sphere, APS has exclusive access to the videos when they’re first posted online. The first few are already available on the PhysicsCentral website.

Science off the Sphere

Pettit’s videos will feature a new experiment roughly every week, and the public will be able to get involved as well. At the end of each video, Pettit will pose a challenge question about the experiments, and a randomly chosen winner from the pool of correct responses will have his or her answer read by Pettit from the ISS.

“It’s about finding the right partner to disseminate the stuff Don is doing,” said Cindy McArthur, Manager of NASA’s Teaching From Space program. “We didn’t have a partner before.”

The videos sent down feature a number of novel experiments that are extremely difficult, if not impossible, to reproduce on Earth. For instance, the first video sent to APS features water droplets orbiting around a charged knitting needle. Because the needle has a charge, it exerts an attractive electric force on the oppositely charged water droplets, causing them to revolve around the needle.

In another experiment, Pettit will demonstrate peculiar surface tension properties of water in a circular ring. When he shoots droplets of water from a syringe toward the water-filled ring, the droplets bounce off as if they were made of rubber. For each video, Pettit will guide the viewers through the physics involved.

“So far, the videos have dealt with how surface tension forces and static charge forces dominate in microgravity,” said APS Outreach Specialist James Roche,  who is in charge of editing the raw footage.

During his first trip to the ISS, Pettit hosted a series of Saturday morning science sessions that explored some of the difficulties of living in a weightless environment. For instance, one of his videos showed how the crew invented a special cup that resembles the shape of an airplane wing. With this cup, the astronauts could sip their coffee instead of sucking it out of a bag—certainly a more refined way to drink. Pettit will revisit this topic in one of the new videos.

“[Pettit] can explain very complex scientific principles in a way that people can understand them,” said McArthur. “That’s a talent.”

Pettit can work on his videos only when he is off duty; most of the time he’s been upgrading and maintaining the space station. Pettit was stationed on the ISS for six months in 2002 and 2003, and he participated in a 15-day mission to provide new equipment for the station in 2008. For his third stint, Pettit recently rode on a Russian Soyuz spacecraft to the ISS and arrived on December 23, 2011.

Due to Pettit’s other responsibilities, it remains unclear how many videos he will be able to produce. Nonetheless, Pettit has a history of dedicating much of his limited off-duty time aboard the ISS to educating the public about basic physics.

As the videos are uploaded to the APS website, NASA plans to notify its 1.7 million twitter followers, ensuring that plenty of physics enthusiasts can participate in the project. Officials at both NASA and APS have become increasingly excited about the partnership while the first videos have been put online.

“Starting a collaboration with NASA is fantastic,” said  APS Head of Public Outreach Rebecca Thompson. “It can even lead to doing this with other astronauts in the future.”

And McArthur believes that the partnership presents an opportunity to merge similar outreach efforts: “When I saw the materials and the way APS is presenting physics, it seemed to me that it was aligned with how Don has taught physics. It’s a really good match.”