March 6, 1913: Bohr describes his model of atom to Rutherford 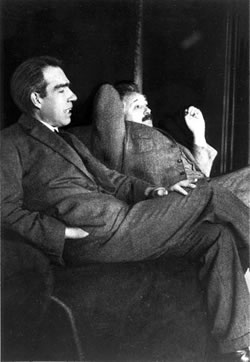 Niels Bohr and Albert Einstein in 1925

The classic diagram of the atom depicts a small nucleus and an electron circling around it in a fixed orbit, and has become a powerful symbol in the public imagination. It is featured in the logo of the United States Atomic Energy Commission, for example, and marks the change of scenes on the hit TV sitcom The Big Bang Theory. Less well known to the public is the man who developed it: Niels Bohr.

Born in Copenhagen in 1885, Bohr was the son of Christian Bohr, a professor of physiology at the University of Copenhagen, and Ellen Adler Bohr, who hailed from a prominent banking and political family in Denmark. Young Niels was encouraged to pursue his interest in science from a young age, and shared an enthusiasm for soccer with his older brother, Harald. (Harald was a member of the 1908 Danish Olympic team that won the silver medal in that year’s competition, and went on to become a renowned mathematician.)

Bohr initially chose to study philosophy and mathematics at the University of Copenhagen, but in 1905 he heard about a physics competition by the Royal Danish Academy of Sciences, and took on the challenge. Using his father’s laboratory, he experimented with the properties of surface tension, producing an essay about his findings that won the top prize. Encouraged by this early success, he switched his focus to physics, earning his doctorate in 1911, writing his thesis on a theoretical explanation of the properties of metals.

While a postdoctoral student at Cambridge University, Bohr worked with the legendary J.J. Thomson, who years earlier had discovered the electron, and proposed the “plum pudding” model of an atom, in which the atom is composed of electrons (which Thomson called “corpuscles”) surrounded by a soup of positive charge to balance the electrons’ negative charges, like negatively-charged “plums” surrounded by positively-charged “pudding.”

That model had since been superseded by the work of Ernest Rutherford, who discovered the existence of the atomic nucleus in 1911, effectively disproving Thomson’s earlier model. In its stead, Rutherford proposed an atom with a small dense positively charged nucleus around which a negatively charged cloud of electrons orbited like planets around the sun.

Bohr met Rutherford the following year, and ended up spending four years in Rutherford’s laboratory at Manchester University, working on a new model for atomic structure. Rutherford’s model was a solid start, but classical physics dictated that, if it were true, the electrons would spiral inward and collapse into the nucleus, making all atoms inherently unstable.

So Bohr adapted the concept to make it more in keeping with the nascent quantum theory born from the revolutionary work of Max Planck at the turn of the century–specifically, the notion that energy could only increase in discrete units, called quanta. On March 6, 1913, Bohr sent a paper to his mentor, Rutherford, describing how his new model for atomic structure explained the hydrogen spectrum.

In Bohr’s model, electrons moved around the atomic nucleus in circular orbits, but those orbits had set discrete energies, and electrons could gain or lose energy only by moving from one orbit to another, absorbing or emitting radiation as necessary. While it is still taught in introductory physics classes, the Bohr model is not quite correct. Most significantly, Bohr’s model violates the uncertainly principle because it features electrons with known orbital periods and a definite radius–two attributes which cannot be directly determined simultaneously. It also makes poor predictions of the spectra to larger atoms. The Bohr atom is now recognized as a precursor of the description of atoms given by quantum mechanics, which was developed more than a decade after Bohr’s work.

Nonetheless, this pioneering work earned Bohr the 1922 Nobel Prize in Physics, “for his services in the investigation of the structure of atoms and of the radiation emanating from them.” He was 37 years old at the time, with many more significant contributions to physics before him. For instance, he devised a liquid drop model for the atomic nucleus, and identified the uranium isotope necessary for slow-neutron fission.

His name is also strongly associated with the Copenhagen interpretation of quantum mechanics, about which he had many good-natured arguments with Albert Einstein. And he developed the principle of complementarity to explain how two seemingly exclusive properties–such as light behaving as a particle and a wave, depending on what kind of measurement one made–could nonetheless be reconciled theoretically.

“The opposite of a correct statement is a false statement,” he once observed, “But the opposite of a profound truth may well be another profound truth.” When Bohr was awarded the Order of the Elephant by the Danish government, he designed his own coat of arms. The design included the yin/yang symbol and the motto, “Opposites are complementary.”

Bohr’s later life was marked by many personal and professional triumphs, but it was also marred by occasional tragedy. He famously quarreled with his brilliant young German protégé, Werner Heisenberg, after the latter revealed that Nazi Germany was working on an atomic bomb–a meeting that was immortalized, in fictional form, in Michael Frayn’s award-winning play Copenhagen. When Hitler’s army invaded Denmark, Bohr fled with his family to Sweden in a fishing boat. He and his son, Aage, wound up in the US working on the Manhattan Project, despite Bohr’s lifelong qualms about nuclear weapons. He returned to the University of Copenhagen after World War II, and remained there for the rest of his life.