Brazil a Great Place to do Physics …and Other Things 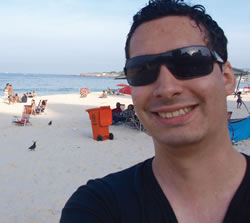 In May of 2011, I applied for the Brazil-US exchange program sponsored by the APS. A possible trip to Brazil had been discussed before, given the long-standing collaboration between one of my PhD advisors at Columbia University, Professor Yasutomo Uemura, and the group of Profesor Elisa Baggio Saitovitch at CBPF (Centro Brasileiro de Pesquisas Físicas) in Rio de Janeiro. While at first my trip to Brazil was only a possibility discussed over dinner in New York in February, by April when Professor Uemura gave me information about the APS exchange program, I realized I had an opportunity not only to visit a place known worldwide for its vitality and natural beauty, but also to work in Mössbauer Spectroscopy, a technique in which I hadn’t had any direct experience before that would complement my own research experience at Columbia. Given that Rio was one of Richard Feynman’s favorite places, I was sure the experience would be very interesting, and I quickly became excited about it.

So, I traveled from New York City to Rio de Janeiro at the beginning of June. I planned to stay in Rio for a couple of days to settle in, and then travel to Foz do Iguazu to attend to the “Encontro de Fisica 2011” for a week. This nationwide conference would gather Brazilian physicists from several fields, as well as some international visitors like myself. After the conference, I would return to Rio for the remainder of my trip.

It’s too easy (and probably too much of a cliché) to talk about how beautiful the landscape of Rio is. I had heard a lot about it, of course, and I was not disappointed. Rio has a unique energy coming from its people and natural beauty that permeates every aspect of daily life. That was the first thing I noticed after stepping out of the airport. From the window of my assigned space at CBPF I could see one of the emblems of the city, the Sugarloaf Mountain, a constant reminder of how wonderful the opportunity to be in Rio was for me.

After a brief stay in Rio, I headed to Foz do Iguazu in the south of the country at the triple border of Brazil, Argentina and Paraguay. The first thing that came to my mind when I traveled there was, of course, the Iguazu Falls. They are absolutely breathtaking, for lack of a better expression (“Poor Niagara!” in the words of Eleanor Roosevelt). But what surprised me the most during that week was finding myself immersed in the middle of a growing and vibrant physics community; a reflection of what I think is an overall abundance of economic resources in Brazil nowadays.

The broad scope of this conference gave me the opportunity to learn about current research being done throughout Brazil in different fields, ranging from applied physics to Quark Gluon Plasma. Unconventional superconductors are my main research focus, so I paid special attention to the condensed matter oral sessions (experimental and theoretical).

Of particular interest to me were the poster sessions held at the conference, due to their more informal nature, and the fact that the presenters were usually graduate students like myself. During these sessions and in my conversations with the expositors, I inquired as much as I could not only about physics, but also about their experience as graduate students or postdocs at their home institutions. While in general I had no problems regarding the language in the oral sessions, when talking with the poster expositors, more often than not I had to rely on Portuguese to communicate, which made it difficult (and interesting) at times. Thankfully, my fluency in Spanish proved to be very useful because the two languages are very similar. However, speaking Spanish/Portuguese is not mandatory in Brazil. As a matter of fact, professors and graduate students alike spoke English fluently, so I didn’t have any communication problems in my day-to-day work at the laboratory in Rio.

Much of the research presented at the conference was theoretical or computational in nature. Based on my own observation, the ratio between theoretical-computational and experimental work was about 1.5 to 1. This could be advantageous for young experimental researchers, if, as I expect, new positions for experimental fields gradually increase to overcome this gap. The conversations I had with different postdoctoral research associates opened my eyes to completely new career possibilities at Brazilian universities and research institutions that I hadn’t contemplated during my studies in the US.

I went back to Rio for the remainder of my trip to work with part of the Mössbauer group led by Professor Elisa Baggio-Saitovitch at CBPF. Mössbauer spectroscopy offers complementary information to Muon Spin Relaxation (muSR), which I’m studying under Prof. Uemura’s direction at Columbia. The focus of our experiments was to study the interaction between antiferromagnetic order and superconductivity in underdoped BaFe2-x(Ni,Co)xAs2

Being an active part of the research group for those two weeks allowed me to become acquainted with a completely different working environment. I was very impressed not only with the good quality of the equipment found at CBPF, but also with the resourcefulness of the students and laboratory staff. I was lucky to have my coworkers show me some of Rio’s nightlife… and boy, Brazilians sure can dance!

All in all, my personal observations on the openness of the research community, scientific culture and quality of life have led me to consider Brazil as a very interesting place to continue my career in the near future (after finishing my graduate studies). We hope to continue our collaboration with the group at CBPF; we have already had some Brazilian students travel with us to perform muSR experiments, and several joint papers have been published (one has been submitted recently to review our work in the summer).

I think that the increasing availability of material resources, paired with the traditional attractiveness of the country, will generate a constant influx of researchers from different parts of the world. I had an amazing time, and I hope that more graduate students and researchers take notice of this wonderful opportunity through the APS exchange program. Muito obrigado Brasil!

Carlos J. Arguello is a PhD candidate in the Department of Physics, Columbia University. APS and the Sociedade Braileira de Física (SBF) co-sponsor the exchange of physics graduate students and professors between the United States and Brazil.  APS is accepting applications until March 31, 2012.