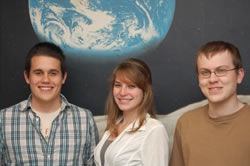 Middle Tennessee State University (MTSU) has not traditionally been a powerhouse of physics teacher preparation. In fact, Ron Henderson, the MTSU physics department chair, wrote in a recent article that “over the past fifteen years the number of students that completed a major in physics and became endorsed to teach high school physics has totaled, well, zero.”

But that is changing fast, thanks to concerted efforts by Henderson and his colleagues, and a little help from the Physics Teacher Education Coalition (PhysTEC). PhysTEC is a project led by APS and the American Association of Physics Teachers (AAPT), with the goal of improving the preparation of future physics teachers. In 2010, MTSU became a PhysTEC funded site, joining 19 other such sites the project has funded since 2001. And in December, MTSU graduated its first physics teacher in over a decade and a half: Hilary Kakanis.

Kakanis, who majored in physics with concentrations in astronomy and teaching, says she will soon be licensed to teach physics and math, and is in the process of seeking a teaching position. Like many physics teachers, however, her path to the profession took a few twists and turns along the way. Kakanis’ original dream was to be a planetarium director. “I’ve always loved talking about space,” she says. “I would love to live in a planetarium.”

But at a meeting with a planetarium director, Kakanis learned there were only around a thousand planetariums in the entire western hemisphere, meaning the job market might be tight. So around the end of her sophomore year at MTSU, seeking to position herself for her dream career, she decided to pursue physics teaching. She then learned about the great need for physics teachers, and that she was good at it. “When I started teaching, I got a whole lot of positive feedback,” says Kakanis. “People said I made the subject approachable, and I made them want to listen.”

Kakanis’s timing was good: the MTSU Physics Department had recently received an award from the National Science Foundation’s Noyce Scholarship Program, which funded the final two years of Kakanis’s education; the department was also in the process of adding a concentration in physics teaching. In addition, the university had become a replication site of UTeach, the highly successful science and math teacher preparation program at the University of Texas at Austin; this provided resources for reforming the teacher certification program.

With support from PhysTEC beginning in 2010, MTSU was able to reform existing physics education courses and begin launching new ones. Kakanis took the department’s first offering of “The Teaching of Physics,” which introduces students to inquiry-based teaching practices that are specific to physics, and she was inspired to see that other physics majors were also becoming interested in teaching. “I’m really excited about programs like PhysTEC and Noyce that are encouraging young people to get into teaching,” she says.

MTSU physics faculty and PhysTEC project leaders expect that Kakanis will be the first of many program graduates who go out and teach in the nation’s high-need schools. “MTSU is rapidly becoming a leader in physics teacher education,” says Monica Plisch, Associate Director of Education and Diversity at APS, and PhysTEC project co-director. “They are poised to help meet a great need for well-prepared physics teachers in Tennessee.”

Henderson adds, “Hilary will embody what the physics education community has learned about good physics instruction.”

For now, Kakanis, who has lived in Tennessee since she was nine, is planning to take her skills to another place where they are also badly needed–Texas. New standards in that state require that all students take physics in order to graduate high school, and Texas universities are not prepared to supply the teachers needed to teach these students. Kakanis hopes to teach ninth graders in a “Physics First” class, also known as the “Inverted Curriculum,” where students take physics before chemistry and biology.

“I like the idea of Physics First,” she says. “Usually when kids get to high school, they hear ‘physics’ and start to freak out because they hear it’s a senior-level class and everybody flunks it. With Physics First, you’re getting the kids when they’re still fresh and new, and have never done anything like that before.

“I want to catch them when they’re young!”