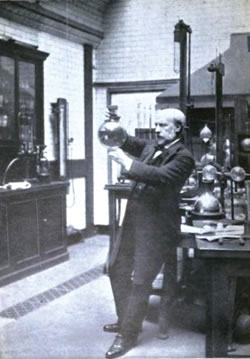 Scientists have long been fascinated by the different phases of matter, particularly the various temperatures and pressures at which one phase changes into another. Some of the most groundbreaking work in turning gases into liquids and solids was done in the late 19th century by a Scottish chemist and physicist named Sir James Dewar.

The youngest of six boys, Dewar was born in 1842 in Kincardine, Scotland. Orphaned at 15, he nonetheless managed to acquire an education, first attending Dollar Academy, and then studying at the University of Edinburgh, finding a mentor in the chemist (Lord) Lyon Playfair.

He was keenly interested in physics and chemistry, describing several different formulas for benzene by 1867, as well as publishing papers on such varied topics as electro-photometry, the sun’s temperature, and the chemistry of the electric arc. By 1875, he had become a professor of natural experimental philosophy at the University of Cambridge, and was elected to the Royal Institution two years later. In 1878, he began a series of studies on the spectroscopy of gases, including their behavior when cooled to very low temperatures.

This was a burgeoning area of research at the time. By 1845, legendary physicist Michael Faraday had successfully liquefied most known gases, except for six, which became known as the permanent gases: oxygen, hydrogen, nitrogen, carbon monoxide, methane and nitric oxide. Just two years after Dewar joined the Cambridge faculty, two French chemists, Louis Cailletet and Raoul Pictet, managed to create (independent of each other) oxygen and nitrogen in liquid form by cooling them to just 80 degrees above absolute zero.

Dewar devoted one of his Friday evening lectures at the Royal Institution to this topic, even demonstrating the apparatus Cailletet had used to liquefy the gases. He dreamed of building on that work to liquefy some of the remaining permanent gases. It took more than six years, but ultimately Dewar prevailed in his quest to liquefy air on June 5, 1885.

By 1891, Dewar could produce liquid oxygen in large quantities, and also showed that it and liquid ozone were strongly attracted by a magnet. But his desire to investigate the liquefaction of gases at extremely low temperatures further were hampered by the lack of a means to keep the gases cold enough long enough to study them. The liquefied gases absorbed heat from the ambient air too quickly and evaporated back into a gaseous phase. He tried boxes filled with powdered cork or hay, including one of his wife’s own hat boxes.

He also studied the electrical properties of supercooled gases from 1892 to 1895 with Ambrose Fleming. His discovery that cooled charcoal could help create high vacuums, in large part because charcoal was so effective at absorbing gases, particularly at very low temperatures, resulted in a better vacuum.

Dewar came up with the idea of using one glass vessel inside another, the double walls separated by a thin vacuum layer. This kept the liquids cold for longer periods of time and helped revolutionize low-temperature research. Fellow scientist Heike Kamerlingh Onnes called it a “magnificent invention, which may be called the most important appliance for operating at extremely low temperatures.”

This was the technological breakthrough Dewar needed to continue his work. He gave a series of six Christmas Lectures in December 1893, concluding on January 8, 1894, in which he liquefied some of the air in the lecture hall for the audience. He showed it could remain in liquid form for a good while if properly enclosed in a “Dewar flask.” Two weeks later, he successfully produced solid air at the January 19 meeting of the Royal Institution.

Alas, Dewar neglected to patent his invention, so he did not reap the immense financial benefits when two German glassblowers formed Thermos GmbH and marketed a hugely successful commercial product–a thermal insulated beverage container suitable for storing both hot and cold liquids–based on his design, which they then patented. Dewar lost a court case to reclaim his invention rights.

But his scientific research prospered. Dewar successfully liquefied hydrogen gas in 1898, using a large regenerative cooling machine he built at the Royal Institution. And he kept improving his methods, ultimately succeeding in lowering temperatures to just 13 degrees above absolute zero, a point at which every gas except for helium liquefies.

Dewar very much wanted to make that last achievement, but on his first attempt to liquefy helium, he failed. Helium was scarce at the time, and it seems his helium source was contaminated with neon gas, which freezes at a higher temperature. His experimental apparatus became clogged with ice.

The honor of being the first to liquefy helium eventually fell to Onnes in 1908, relying on the methods Dewar pioneered. Onnes sent a telegram to Dewar on March 5, 1908, announcing the achievement: “Converted helium into solid. Last evaporating parts showed considerable vapor pressures as if liquid state is jumped over.” Dewar was gracious in his reply: “Congratulations! Glad my anticipation of the possibility of the achievement by known methods confirmed. My helium work arrested by ill health but hope to continue later on.”

Onnes received the 1913 Nobel Prize in Physics for his work. Dewar did not, although he was nominated several times. But he did garner many other awards and honors in his lifetime, including many prestigious medals from scientific societies. He was knighted in 1904.

While serving on a government committee on explosives in the late 1880s, Dewar and a colleague, Frederick Abel, developed cordite, a smokeless gunpowder.

The outbreak of World War I interrupted Dewar’s research program into the properties of elements at low temperatures, and he lost several key staffers as a result. Dewar never rebuilt his program, even after the war ended, devoting his attention primarily to studying surface tension in soap bubbles, and to measuring infrared radiation in the atmosphere with a thermoscope of his own design.

Dewar remained active as a scientist until the very end, refusing to retire from his position with the Royal Institution. He died in London on March 27, 1923. But his work in low-temperature gases, and particularly his invention of the Dewar flask, proved seminal to the field of cryogenics.