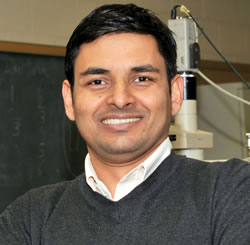 Happy New Year 2012! I am really excited to write this article as a graduate student member of APS. I began graduate studies in the US after completing my undergraduate studies in physics in India, with the notion that graduate school is about doing well in courses and assignments, learning new skills and consequently carrying out research work–the usual drill. In my first semester I became a member of APS and got involved in the Forum on Graduate Student Affairs (FGSA) activities as Secretary of the FGSA. Ever since, it has been a very fulfilling experience, and I have been fortunate to have had many exciting opportunities to think and act, quite often out of the box. Thanks to the APS, I now have a much broader and active view on what it means to be a graduate student in the United States and the opportunities ahead for international scientific collaboration.

In the past months, I had the great honor of leading the Canadian-American-Mexican Physics Graduate Student Conference (CAM2011) organizing committee and the journey was a unique experience. In this letter I would like to share my experience with CAM, how immensely satisfying and revealing an experience it has been and how it has helped me realize that graduate training goes way beyond lab research. Admittedly, it was a little daunting at first. Having been a participant in CAM2009, I knew expectations would be high, which meant that the task at hand wasn’t going to be easy. However, my apprehensions were soon put to rest once the organizing committee was in place. All of us, the students from Canada, Mexico and the US, executive members of FGSA and the fabulous staff members at the APS, CAP and SMF served to inspire and encourage each other. The commitment and earnest efforts of the organizing team really gave wings to my ideas and propelled me to think higher and higher for CAM2011.

FGSA hosted CAM2011 in Washington DC at the end of September last year and the choice of city was well thought out. The US capital, being the nerve center of general policy formulation and science and technology in particular, nicely complemented an important theme of CAM2011, namely “Policy.” In today’s rapidly changing world, the critical significance of the right kind of scientific policies cannot be overemphasized. Keeping this in mind, we boldly experimented with the scope of CAM to organize two panel discussion sessions on “Science and Policy” and “Science for Diplomacy.” The response was overwhelming. The discussions offered an open forum to freely explore the important role of scientists in policy making and it significantly increased our appreciation for the obstacles faced by the experts. By engaging with the issues of how science affects policy making and, in turn, how policy can influence the development of science, it neatly brought out the social aspects of doing science. For me personally, the panel discussions were an eye-opener and changed my idea of serving the cause of science, especially physics–which was doing lab research and publishing research papers. In today’s interconnected world, alternative scientific career paths ought to be considered as respectable as scholarly research and publishing when one measures them against their ability to solve modern society’s pressing problems.

Last month’s APS News featured an article on CAM2011, so I won’t discuss how the conference fared in terms of meeting the expectations of the participants and the organizers. Rather, I shall describe the lessons I have learned as a CAM2011 participant and as an organizer. These are simple sounding “values” which I have termed broadly as courage, co-operation and communication. They may sound nebulous in their meaning, but I would like to think of them as mantras.

The 3C’s:
Courage: It is always easy to break the ice when meeting new people if one takes the initiative and starts a conversation related to her or his field of interest. This requires not only an eagerness to learn but courage to think out of our personal scientific box, our comfort zone. We should remember that the sharp boundaries between the disciplines and the sub-disciplines are constantly getting breached even as, admittedly, more and more sub-disciplines are branching out. The ability and the courage to “break through to the other side” will have a great bearing on the future of science and society. The informal and convivial atmosphere at CAM2011 was exactly what was needed for my fellow graduate students to start talking and communicating with one another.

Co-operation: Any social endeavor needs a fair amount of co-operation for it to succeed and science is certainly no exception. We must also recognize that no plan of co-operation could succeed if we do not take a broad and unselfish view of science and its potential. Co-operation would go a long way in paving the path for multilateral international collaboration as it would be a win-win situation for all parties involved. It would compensate for the cultural and political differences between the scientists and, ultimately, help to bridge the differences between peoples and nations.

Communication: It is very important to communicate new developments and scientific advancements not only to scientists but also to non-scientists. This is much needed in order to counter anti-scientific rhetoric which flourishes in an atmosphere of scientific illiteracy. I did not observe any obstacles in communication among the participants at CAM, even though they were from very diverse backgrounds. This came naturally to CAM as, being graduate students, all participants were on the same footing. It fostered an atmosphere full of rich possibilities for future collaboration.

In light of rapid changes around the globe in general and scientific advancements in particular, we, the graduate students, will have to play a major role in shaping things to come not only by performing high-quality research but also by providing efficient and able leadership. We have to go the distance by inculcating in ourselves the required skills and values and inspiring our colleagues to do the same. CAM2011 did well indeed by “catching them young.” Its task is well cut out for the future. The APS Staff members and CAM2011 Committee deserve many kudos and I personally owe them sincere thanks for this unique educational experience which I will always cherish. I thank all the invited speakers for kindly accepting our invitation and the participants for making CAM2011 a great success. We value their constant encouragement. Lastly, on behalf of the organizing committee, we are extremely grateful to Amy Flatten and Michele Irwin for gently guiding us in the planning stages of the CAM2011 and for seeing us through to its success. Once again, I wish you all a very happy and peaceful year ahead.

Abhishek Kumar is a graduate student in the physics department of the University of Massachusetts Lowell. He served as the 2011 International Officer for the APS Forum on Graduate Student Affairs.