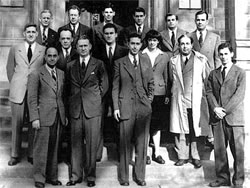 Members of the Chicago Pile team gathered on December 2, 1946, to mark the 4th anniversary of the first self-sustained chain reaction. Fermi is at left in the front row; Leo Szilard is the third from the right.

Despite the onset of the Great Depression, the 1930s was a heady, dramatic decade for physics. Against a backdrop of growing global political unrest, a series of revolutionary breakthroughs in nuclear physics set the stage for a high-stakes race to build the first atomic bomb and put an end to World War II. Caught in the thick of that race was an Italian physicist whose name would one day adorn one of the foremost laboratories in the world: Enrico Fermi.

Fermi was born in Rome, Italy, in 1901 to a railroad official, Alberto, and his wife Ida, a schoolteacher. He and his older brother Giulio shared a fascination for taking apart engines and other mechanical things, but Giulio died suddenly in 1915 due to a throat abscess. The grief-stricken Enrico threw himself into scientific study to cope, confessing many years later in his memoirs that he used to walk past the hospital where his brother died every single day until the grief finally abated.

Science turned out to be an excellent fit for the gifted young man, particularly physics. Fermi discovered physics by accident, after stumbling upon a 900-page Jesuit treatise on elementary mathematical physics while browsing in the local market one day. He also found a friend to share his enthusiasm for science: a fellow student named Enrico Persico. The two of them built gyroscopes and performed their own experiments to measure Earth’s magnetic fields, among other projects.

Fermi’s first important scientific contribution was a 1922 paper in an Italian journal where he first introduced the concept of “Fermi coordinates” –coincidentally the same year he graduated from Scuola Normale Superiore. He went on to study at the University of Gottingen and the University of Florence before becoming a professor at the University of Italy at the tender age of 24.

The year before, Fermi had been writing an appendix for the Italian translation of A. Kopff’s The Mathematical Theory of Relativity. He realized that Albert Einstein’s most famous equation (E=mc2) implied a very large amount of potential nuclear energy that might conceivably be made available under the right experimental conditions. He pursued that avenue of research enthusiastically while in Rome with a small group of colleagues that included Emilio Segre. They earned the moniker “the Via Panisperna boys” after the street on which the labs were located. Among their many seminal contributions was the discovery of so-called slow neutrons and their effect on various elements.

Ultimately, Fermi won the 1938 Nobel Prize in Physics for his “demonstrations of the existence of new radioactive elements produced by neutron irradiation, and for his related discovery of nuclear reactions brought about by slow neutrons.” Fermi took advantage of the award ceremony in Stockholm to emigrate to the United States, concerned about the safety of his Jewish wife, Laura, under Mussolini’s Fascist regime–specifically the newly instituted Manifesto of Race. He wound up at Columbia University.

Reports of experimental evidence for nuclear fission began circulating early in 1939, in a manuscript by German chemists claiming they had detected barium after bombarding uranium with neutrons. Among those who heard the news was Lise Meitner, who realized, with her nephew, Otto Frisch, that this could be nuclear fission. The news quickly spread across the pond to American physicists, including Fermi.

On January 25, 1939, Fermi and his Columbia colleagues conducted the first US nuclear fission experiment. Later that year, Leo Szilard–who first hypothesized the chain reaction in 1933–and Einstein signed the now-famous letter to President Franklin D. Roosevelt warning that Nazi Germany was likely trying to build an atomic bomb. Roosevelt responded with funding for further experiments. And the seeds for the Manhattan Project were sown.

Uranium pellets made up the neutron-producing core, separated by graphite blocks, and the critical reaction was controlled by a series of cadmium-coated control rods that absorbed the neutrons emitted by the core. One by one, those cadmium rods were removed, increasing the neutron activity in the pile until a self-sustaining nuclear chain reaction occurred. Conspicuously absent from the pile was any kind of radiation shielding or cooling system.

On December 2, 1942, a young physicist named George Weil removed the final control rod from the pile under Fermi’s supervision, which reached criticality at 3:25 PM. Fermi shut down the reaction 28 minutes later by re-inserting the cadmium rods. It was a landmark achievement, reported in a coded conversation between Arthur

Compton and James Conant, chairman of the National Defense Committee:
Compton: The Italian navigator [Fermi] has landed in the New World.

Conant: How were the natives?
Compton: Everyone landed safe and happy.

Chicago Pile-1 ceased operation in February 1943 and was moved to the site of the future Argonne National laboratory, where it was rebuilt with the original materials–this time with a radiation shield–and renamed Chicago Pile-2. One can still view a few of the original graphite blocks on display in various spots around the country.

The original site at the University of Chicago was designated a national historic landmark on October 15, 1966, and a city landmark in 1971. The plaque inscription reads, “On December 2, 1942, man achieved here the first self-sustaining chain reaction and thereby initiated the controlled release of nuclear energy.”