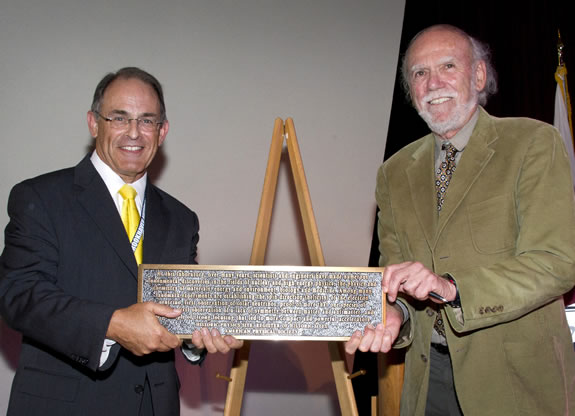 This fall, as part of its historic sites initiative, APS recognized both Brookhaven National Laboratory on Long Island and the former campus of the National Bureau of Standards in Washington, DC as historic physics sites.

Brookhaven was recognized not for one achievement, but for many. The citation on the plaque that was presented reads “At this laboratory, over many years, scientists and engineers have made numerous fundamental discoveries in the fields of nuclear and high-energy physics, the physics and chemistry of materials, energy and environment, biology and medicine. Among many landmark experiments are establishing the spin direction (helicity) of the electron neutrino, first observation of solar neutrinos, proof of more than one species of neutrinos, first observation of a lack of symmetry between matter and antimatter, and the principle of strong focusing that led to more compact and powerful accelerators.” Not mentioned on the plaque, but also a landmark in physics, was the discovery of the omega-minus particle in a bubble chamber experiment in 1964, confirming the predictions of the quark model. In the photo at top, APS President Barry Barish (right) presents the plaque to Brookhaven Laboratory Director Samuel Aronson. The presentation took place on September 23 during a special symposium at Brookhaven to mark the historic site designation. 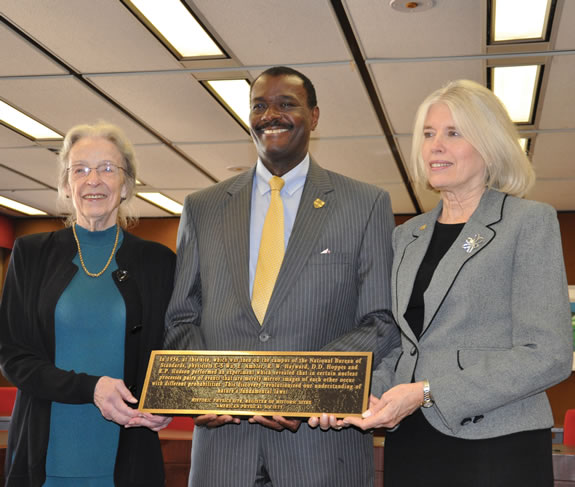 In the autumn of 1956, the National Bureau of Standards campus in northwest Washington DC was the site of an experiment showing that nature did not respect the symmetry interchanging left and right. The idea that weak interactions might violate this symmetry was suggested by T.D. Lee and C.N. Yang, and the experimental proof was carried out by C.S. Wu of Columbia and four NBS scientists, working at the low temperature laboratory on the NBS campus. The citation on the plaque reads "At this location in 1956, C.S. Wu, E. Ambler, R.W. Hayward, D. D. Hoppes, and R.P. Hudson measured the asymmetry of the angular distribution of electrons emitted by polarized 60Co nuclei demonstrating that weak interactions are not symmetric under a change of parity. This work led to the recognition that the weak and electromagnetic forces are aspects of a single force."

In the 1960s, the NBS moved from Washington to Gaithersburg, MD, and later changed its name to the National Institute of Standards and Technology (NIST). The former campus is today mostly occupied by the University of the District of Columbia (UDC). As shown in the photo, on November 9, APS Executive Officer Kate Kirby (right) presented the plaque recognizing the parity experiment to UDC President Allen Sessoms, himself a physicist and APS Fellow. Also participating in the ceremony was Katharine Gebbie (left), Director of the Physical Measurement Laboratory at NIST.