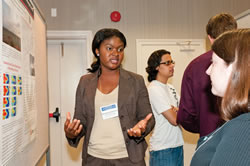 Photo by Ken Cole/APS
Blessing Iserhienrhien, University of Saskatchewan, explains her research during the poster session of the CAM meeting.

Graduate students from across North America converged on Washington DC for a three-day conference highlighting their research in physics, as well as possible career paths outside of research. The Canadian-American-Mexican Graduate Student Physics Conference (CAM) brought together 103 students and 21 additional invited speakers from the three North American countries from Thursday, September 29 through Saturday, October 1.

“CAM is a conference that is organized by, and is for, graduate students in the US, Canada and Mexico,” said Michele Irwin, APS’s international programs administrator. “It’s an opportunity for the graduate students to come together in a smaller setting… and present their research to an audience of their peers.”

“It’s a unique conference where students get to see their fellow students from Mexico and Canada,” said Abhishek Kumar, a graduate student at the University of Massachusetts, Lowell and chair of the conference’s organizing committee. “CAM is organized by the students, for the students, with help from APS, CAP, and SMF,” referring, in addition to APS, to the Canadian Association of Physicists and the Sociedad Mexicana de Física.

The CAM conference is held every other year and is hosted in the United States, Canada and Mexico on a rotating basis. The last CAM conference was held in 2009 in Acapulco, Mexico. The United States last hosted in 2005, when it was held in San Diego. The scientific sessions feature research done by graduate students across the physics disciplines.

“It was a really great conference,” Irwin said. “The students did really well, and everyone had a good time.”

Because the meeting this year was held in Washington DC, the organizers placed an extra emphasis on the intersection of science and public policy. The meeting featured discussions on careers in shaping science policy, and on the role in foreign policy that scientific collaborations play. The last full day of the meeting concluded with a banquet at the House Rayburn Office Building on Capitol Hill.

Friday afternoon’s plenary session on science and foreign policy explored current and historical examples of scientists putting aside national and ethnic differences to advance science and understanding. The modern example the panel cited is the ongoing SESAME project that brings together scientists from nine countries in the Middle East, including from nations unfriendly each other, to build a synchrotron light source in Jordan. Historically, they pointed to times during the Cold War when US and Soviet scientists continued to communicate and collaborate, even during times of strained government relations.

“It was an example of how scientists and scientific societies can help in diplomacy and add to foreign policy,” Kumar said

Graduate students learning about organizing a conference is as much a part of CAM as are the sessions. The students that made up the organizing committees gained firsthand knowledge of budgeting, logistics and moderating a science conference.

“It was a unique experience for me, because I got to do something we don’t usually have the opportunity to do during grad school,” Kumar said.