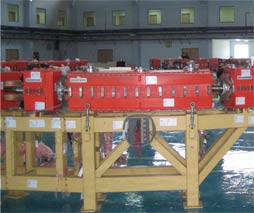 Despite political upheaval in the Middle East and earlier financial concerns, efforts to bring a particle accelerator to the region are continuing forward as planned. The report from the May 30-31 council meeting of the Synchrotron-light for Experimental Science and Applications in the Middle East, better known as SESAME, is that the project is on schedule and close to being fully funded.

“I think the main thing was we really feel pretty secure about funding now,” said Sir Chris Llewellyn-Smith, president of the SESAME council. “We’re in a position to really go full steam ahead.”

SESAME is the multinational project to build a 2.5 GeV synchrotron light source in Jordan. Currently there are about 60 synchrotrons around the world; however, none is located in the Middle East. The multinational SESAME collaboration, organized by UNESCO and modeled after CERN, aims in part to revitalize science in the region. At the same time, SESAME is seen as a major diplomatic effort, bringing nine nations together on the project, including historical rivals such as Israel, Iran, Pakistan and the Palestinian Authority.

Much of the construction of the facilities is already completed, and workers are preparing to install the accelerators themselves soon. The tunnels and radiation shielding walls have all been finished. Germany donated the booster ring from its decommissioned BESSY1 light source, while the United States and European countries have donated other extra parts including wigglers, undulators and five beam lines. Construction on the main storage ring is about to begin. The project is on schedule to have experiments begin in 2015 with three beam lines. More will be added over time.

“We’re on track to get experiments going,” said Llewellyn-Smith. “I think the problem is going to be building up staff rather rapidly, and building up the community.” He added that a new grant from the Washington, DC-based Lounsbery Foundation is sponsoring travel grants for students to travel to existing synchrotrons to build up skills for operators and users of SESAME once it comes on line.

Until recently, the collaboration had been looking at a $35 million deficit. However, at the May meeting, members were able to pull together about $25 million in funding, leaving only $10 million needed to start experiments on schedule. Iran, Israel and Jordan each confirmed their matching contributions to the project of $1 million each year for the next four years. Turkey’s delegation also promised to contribute funding; approval is needed first in its parliament, but is expected to pass. Pakistan likewise promised $5 million, and the Palestinian authority pledged $2 million.

Egypt pledged funding as well. Prior to the meeting there was some concern about Egypt’s continued involvement in the project because of the recent political upheaval in the country. Egypt has long been a supporter of the project, and it was feared that after the overthrow of the Mubarak regime, the new government might not back the project. However, the new Minister of Higher Education, Scientific Research and Technology held the post prior to the recently deposed minister. He is in the process of reapplying for SESAME funds to the new minister of finance who is also seen as a supporter of the project. The funding is expected to come through.

“Any of the disruptions or changes due to the Arab spring do not seem to be affecting SESAME,” said Amy Flatten, APS’s director of international affairs, who attended the council meeting in Jordan.

Llewellyn-Smith thinks that the remaining funds needed should be raised fairly easily. He has been in touch with members of Congress in the United Sates and the Office of Science and Technology Policy to try to get a contribution from the United States. In a 2009 speech in Cairo, President Obama emphasized the need for science and technology investment in the Middle East and the OSTP has recommended contributing to SESAME, but so far no money has been appropriated.

“Now’s the time to be getting back in contact with people in Washington,” Llewellyn-Smith said, adding that he hoped that it would be easier to coax the United States into contributing with the program close to completion.