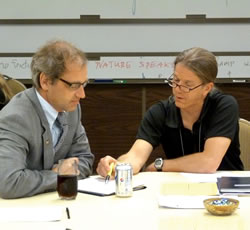 During two warm, workshop-packed spring days in Austin, Texas, 120 physicists and educators came together to discuss topics as disparate as undergraduate course reforms, student teacher mentoring, poverty’s effect on student achievement, and negotiating with university administrators for funding. The occasion was the seventh annual Physics Teacher Education Coalition (PhysTEC) Conference, which took place on the campus of the University of Texas at Austin.

The PhysTEC Conference, organized by APS and the American Association of Physics Teachers and formerly known as the PTEC Conference, is the nation’s largest event focusing on physics teacher preparation, and brings together experts in this field from around the country. This year’s conference was back-to-back with the annual meeting of the UTeach Institute, a project based at the University of Texas, Austin that prepares science and math teachers at sites around the country.

The theme of this year’s conference was sustainability, and workshops developed this concept in a number of contexts. Panels explored ways to sustain various components of teacher education projects, including physics-specific pedagogy courses, the hiring of master teachers to work in physics departments, and teaching reforms in introductory physics courses. In a popular session entitled “It takes a University for Science Teacher Preparation,” an education chair, and science dean, and a university provost provided insight into the issues that administrators grapple with when deciding how to allocate resources.

Numerous speakers presented data supporting teacher preparation efforts. Among these was Carl Wieman, Physics Nobel laureate and OSTP Associate Director for Science, who spoke about the importance of high-quality data for policy makers hoping to justify the costs of education programs. Wieman also described his work in promoting a more scientific approach to teaching and learning. “We need to have all students think about and use science more like scientists,” he said.

Sharing Wieman’s passion for data is Michael Marder, a University of Texas physics professor and UTeach co-director. In a session on teacher quality and poverty, Marder argued that student poverty is a dominant–and often ignored–factor in determining achievement. Drawing on the history of the now-defunct British airplane maker de Havilland, Marder drew an analogy between poverty in schools and faulty airplane design, stating that “Attempting to improve student achievement by training teachers better is analogous to attempting to train pilots better to solve the problem of planes falling out of the air.”

Erik Brewe, a Florida International University education professor, gave another data-rich presentation. He provided evidence that a technique called Modeling Instruction had greatly improved learning and attitudes toward science among FIU undergraduates. Delving into the new field of social network analysis, Brewe also presented data showing that students taking courses that use Modeling collaborate with far more of their peers than those who receive traditional physics lectures.

Many conference attendees remarked on the community the PhysTEC Conference has helped build. Noah Finkelstein, a seven-time conference veteran and frequent presenter, said that the conference is “the right size and scale, friendly, and personable.” Kathy McCloud, a program officer at the National Science Foundation, which funds the PhysTEC project, said, “It’s encouraging to see people who care about teacher education exchanging ideas.”

The sessions on the afternoon of the second day of the conference were open to both PhysTEC and UTeach conference attendees. One panel discussion, entitled “Educating Physics Teachers at UTeach Replication Sites”, included representatives of universities that are both PhysTEC and UTeach sites. Several participants noted that PhysTEC was in a good position to provide an extra push in physics for UTeach sites, many of which have not seen the same increases in physics teachers as they have in other math and science fields.

Monica Plisch, Assistant Director of Education at APS and the main organizer of the PhysTEC Conference, was pleased with this year’s event. “This year’s conference really showcased the community and energy that the project has built around physics teacher education,” she said. “The UTeach connection brought together people with common interests, and provided a lot of interesting new perspectives.”