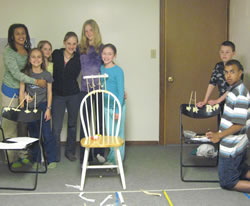 All eight members of the home schooling cooperative get together to do the "Watch it Fly" activity from the 2011 PhysicsQuest kit.

APS has announced the winners of this year’s PhysicsQuest competition for middle-schoolers. Taking the grand prize this year are the students at a home schooling cooperative in Wexford, Pennsylvania.

The eight students, ranging in ages from nine to fourteen, conducted the experiments in the PhysicsQuest kit and solved the puzzles correctly. Their entry was selected at random from all the correct answers to receive the grand prize. Each student on the winning team will receive an apple iPad and APS memorabilia, and the team as a whole will receive a $500 gift certificate to the teaching supply company Educational Innovations who produced the APS-designed kits.

Started by APS during the World Year of Physics in 2005, PhysicsQuest has brought interactive physics experiments to hundreds of thousands of middle school students every year. The free kits include the materials for four physics experiments centered on a field of physics. This year’s version ties the experiments together with a comic book narrative “Spectra’s Force”, starring APS’s original laser superhero Spectra. The kit focuses on force and motion, and features the titular hero squaring off against the brilliant but misguided General Relativity.

“This was PhysicsQuest’s sixth year. It’s a program that comes with everything you need to do four physics experiments,” said Rebecca Thompson, APS’s head of public outreach, “It’s done with things they can find in their kitchen. It’s done to teach them that physics is everywhere, not just in a lab.”

Past kits featured puzzles and experiments themed around famous scientists, including Nicola Tesla teaching about electricity and magnetism, Marie Curie describing heat and energy transfer, and Benjamin Franklin teaching static electricity. The superhero Spectra made her debut in the 2009 laser and optics kit, to coincide with LaserFest, 2010’s celebration of the 50th anniversary of the first working laser.

Next year’s kit will return to heat and thermodynamics as Spectra faces off against the mean new girl in school Taylor Maxwell and her pet demon.

The kits are sent out to 13,000 classes each year. More than 500 teachers participated in the contest this year by submitting their answers on the PhysicsCentral website.

“The program is wonderful. We’ve done it for the past couple of years. And the kids think it’s great,” said Amy Wilks, one of the parents and teachers of the winning cooperative. “We make lunch and we make it a whole day event.”

She added also that she felt the flexibility of homeschooling works well with an exploration-based kit like PhysicsQuest, giving kids the opportunity to investigate more subjects they’re interested in.

“It is really beneficial to have a whole packaged program,” Wilks said. ‘’Its something we can do with our kids, and they enjoy it, and all the materials are all there.”

Thompson added also that PhysicsQuest has been popular with home school students and teachers since its inception.

“Traditionally we have a lot of home schoolers participate, which is great,” Thompson said. “We’ve had such a strong home school following. It’s neat that they’ve finally won.”