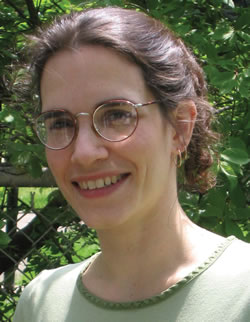 Seven years ago, APS established a fellowship with a bequest from M. Hildred Blewett, an accelerator physicist who died in 2004. The fellowship was created for women physicists returning to research after having taken a break from their careers, for family or other reasons. To date, nine women have been awarded the fellowship, and one of them now has a tenure-track position, a key measure of success for the program.

Elizabeth Freeland, who became the second recipient of the Blewett Fellowship in 2006, will start teaching this fall at Benedictine University, a small, primarily undergraduate institution in Lisle, Illinois, a suburb of Chicago. Freeland, a high-energy physicist, says the position is exactly what she was looking for. “I’m very excited to have this position. I’ve known for a long time that I wanted to teach at a primarily undergraduate institution.” And just as important for Freeland, who has been a postdoc at both Washington University in Saint Louis and the University of Illinois at Urbana-Champaign, “My entire life will now be in one geographical location.”

Receiving a tenure-track position represents the culmination of a journey back to physics research that began after the birth of Freeland’s second child. She left research after receiving a PhD in physics from The Johns Hopkins University in 1995, when her husband took a position at Brookhaven National Lab on Long Island, where few other physics positions existed. Around that time, the couple decided to start a family.

A few years later, Freeland’s husband took a position at Argonne National Lab near Chicago, an area with more job opportunities in physics, and Freeland began looking to re-enter physics research. She found a supportive research group at Fermilab, but became stymied when she went to look for funding. Freeland found that most early-career grants required the applicant to have institutional affiliation, and be no more than five years removed from a PhD. “The grants were written with a certain idea of what a scientific career looks like, and when you deviate from that, people don’t know what to do with it.”

Finally Freeland found a grant she was eligible for from the American Association of University Women (AAUW), and applied and received it. The next year she applied for and received the Blewett Fellowship. “The Blewett Fellowship was a critical piece,” in restarting her career, Freeland says; “It filled the gap for my younger child to get day care.” Freeland also notes, “There are other aspects of the Fellowship that are powerful. One is the autonomy–I was in control of the money and what I did with it, as opposed to working for someone else. It puts you on a different footing in work with other people when you have your own money.”

Thanks to her years of grappling with a system that expects uniformly linear career paths, Freeland has become an expert on scientific career breaks. A few years ago she started a website for others considering or taking breaks. “I had to do so much work when I was first trying to get a grant that I thought this really needs to be written down,” she says. The website features grants available to scientists who have taken career breaks, stories of women who have successfully returned from such breaks, and articles and reports on this and related issues, including the infamous two-body problem faced by many scientist couples. It can be found at http://home.earthlink.net/~papagena.

Now that she has her tenure-track position lined up, Freeland can reflect on the journey that got her there. “One piece of advice [for scientists considering a career break] would be to do a postdoc for at least one year. Once you have some postdoc experience, you’re seen by the community as an official, independent scientist. That will put you in a better position to come back after the break.” And, she says, “Really plan out and brainstorm all of the options you have, before you take a break. The plan itself will change, but you’ll know what options you have.”

Freeland also has advice for funding agencies. “I encourage institutions to write applications in such a way that people without institutional affiliation aren’t excluded,” she says. “More flexibility in terms of career paths would, I suspect, help diversify science in the United States. In many cases it’s just a phrase” in the application that needs to be changed.

Freeland plans to continue doing research at Fermilab, where she began her high-energy physics research and where she still has many collaborators, and she will now be able to offer summer research opportunities to her students. She is also looking forward to teaching and designing new courses. She says, “I have a lot of experience teaching non-scientists and creating new courses; and I have a lot of new ideas I’m excited to try.”