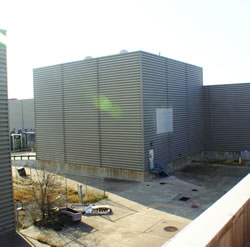 Abandoned buildings at the SSC

A small cohort from the APS March Meeting in Dallas took the opportunity one afternoon to celebrate the centennial of superconductivity by making a pilgrimage to the site of the Superconducting Supercollider in Waxahachie.

Waxahachie was selected as the site in 1988, and large-scale construction began in 1991. But in October of 1993, the project was terminated by Congress, dealing a severe blow to the future of high-energy physics in the United States, and to some extent negatively affecting the whole spectrum of American physics research.

The buildings, which loom suddenly and incongruously out of the rolling pastureland, are abandoned now. Their corrugated metal sides resound eerily as the wind sweeps past them across the Texas plains. Inside, virtually everything has been stripped bare, although in one building there are some unopened crates full of equipment that had the bad luck to be delivered just as the project was being shut down.

Outside, mounds with deep pits inside them are scattered like miniature calderas. These are the filled-in shafts that once gave access to the tunnel that would house the accelerator. Before cancellation, 17 shafts were dug, and about 15 miles of the projected 54-mile tunnel had been bored. The tunnel is still down there somewhere, probably mostly filled with water.

It’s hard to visit the site and avoid comparing it, in one’s mind, to the CERN laboratory in Geneva, where the Large Hadron Collider is up and running and where major discoveries are presumably just around the corner. The SSC would have been finished earlier, probably a decade earlier, and would have run at much higher energy (colliding proton beams of 20 TeV each, compared with 7 TeV for the fully operational LHC, although the LHC is now running at half that). But the cost was deemed prohibitive, and leadership in high-energy physics has passed to the Europeans.

President Reagan gave his blessing to the SSC with the exhortation “Throw Deep.” The ball was indeed thrown deep, but the pass was never completed. Another Reagan quote, from the 1980 presidential campaign, was the question “Are you better off now than you were four years ago?”. Is physics in the US better off today than it was in 1993, when the SSC was canceled? The Tevatron at Fermilab will soon be shut down, after a distinguished career but without the chance for the biggest prize; and the Holifield Research Accelerator at Oak Ridge is also being terminated. With the federal budget process in disarray, further cuts, possibly drastic ones, are on the table. President Obama has referred to a “Sputnik moment” that will re-ignite enthusiasm and support for science and technology. If we're not careful, we may be facing another “SSC moment” instead.

Readers can find some interesting before and after photos of the SSC site at the March 24 “Physics Buzz”blog post, The High Water Mark of American Science.  "Physics Buzz" blog is hosted by the APS website for the public, PhysicsCentral.