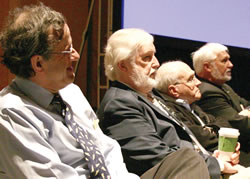 Panelists from the "Drowning in Carbon: The Imperative of Nuclear Power" session answer questions from the audience. From left to right are Robert Rosner (U of Chicago), Lee Schroeder (LBNL and TechSource), Victor Reis (Department of Energy), and Jay Davis (Hertz Foundation and formerly of LLNL). Raymond Orbach of the University of Texas spoke at the session but had to leave before the panel discussion.

With a nuclear meltdown underway at the Fukushima Nuclear Power Complex in Japan, a previously planned session at the March Meeting on the future of nuclear energy took on a decidedly different tone than the presenters had planned, and one of the presenters, Toshikazu Suzuki, of Japan’s National Institute of Radiological Science, was forced to cancel because of his role in the nuclear remediation efforts at the ailing plant.

The Tuesday session was titled “Drowning in Carbon: The imperative of nuclear power,” however, the focus turned to fallout from the nuclear disaster.

“Everything worked exactly as it should,” said Raymond Orbach, director of the Energy Institute at the University of Texas at Austin, “except for the tsunami.”

Orbach, who had served as Under Secretary of Energy for Science in the George W. Bush administration, broke down a blow-by-blow sequence of the partial meltdown and said that much of the problem stemmed from the fact that the spent fuel being stored in the reactor building was four times larger than that actually in the reactor. Instead of transporting the spent fuel away from the site or storing it in a nearby cooling pond as is done in the US, the Japanese had simply kept the material in the building.

“There needs to be some movement of spent fuel rods away from the facility,” said Orbach, “and that was not done.”

According to Orbach, the plant survived the earthquake in good shape, but after the tsunami hit, all the back-up generators failed and the batteries were soon exhausted. The power company then tried to alleviate the problem by venting steam from the reactor, which also didn’t work, he said. At that point, a process called core oxidization started occurring rapidly, creating corrium–a lava-like mixture of materials that forms inside a nuclear reactor during a meltdown–which generated huge amounts hydrogen inside the building until it finally exploded. The spent fuel rods are thought to have been stored in the upper levels of that building, he said.

The power company then pumped the building full of sea water to try to stop the meltdown. Orbach classified that as a standard move and not a “Hail Mary”, as he said much of the press had categorized it. However, he questioned the power company’s motive in waiting so long to reach the conclusion that it was necessary and suggested they might not have wanted to admit that everything else had failed.

Each of the speakers took time to reiterate their belief that nuclear power was imperative to America’s future.

Victor Reis, a senior adviser in the Department of Energy’s Office of the Under Secretary for Science, had originally planned to echo remarks made in the President’s State of the Union speech that America was at a Sputnik moment with regard to energy.

Instead, he spoke at length about a five-postulate argument that he had presented to the Blue Ribbon Commission on America’s Nuclear Future, which is currently working on policy recommendations.

The five postulates were: that the availability of electricity is essential to prosperity; climate change is real and time-critical; nuclear energy is a prime replacement for coal; electricity will remain private; and the US government is interested in the environment, safety, national security and economic well-being, all of which are affected by nuclear energy.

Reis, who was not speaking on behalf of the Department of Energy, categorized much of the problem with energy as getting out of the coal business. He said that currently the US produces 800 Terawatt hours (TWhr) from nuclear power plants, but that in order to meet the President’s stated goals, that number would have to grow to 2500 TWhr.

Achieving that amount of electricity from nuclear plants would require a $10 billion investment over the next five years, Reis said.

He also seized on an idea that each of the speakers repeatedly emphasized–that small, modular designs could solve many of our nuclear woes.

According to Reis, America’s nuclear future was dependent on the fate of having long-term nuclear waste storage at the Yucca Mountain site in Nevada after interim storage options were taken away for political reasons. Politicians also canceled funding for small, modular designs because many didn’t see a need if waste was to be taken straight to Yucca Mountain. When the site was taken off the table, it placed all of US nuclear energy at risk.

He said the Blue Ribbon Commission is expected to help change some of these decisions.

Robert Rosner, of the Harris Energy Policy Institute at the University of Chicago, said that we needed to think carefully about spent fuel storage in light of what happened at Fukushima, but he said that America had responded exactly the wrong way after our own country had problems at Three Mile Island.

Rosner described wings falling off of airplanes and fuselages disintegrating in mid-air during the early days of flight, and said that government action at the time wasn’t to stop making new airplanes. He said the federal government invested heavily in determining what went wrong and then invested again in fixing the problems. That decision is why we now have the safe airplanes that we do.

“Is this the way to run–not the airline industry–but the fission industry?,” asked Rosner. “I think the answer is no. Engineering fields learn from mistakes; it’s time to start putting those lessons to use.”