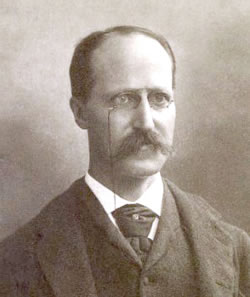 Isaac Newton’s experiments with splitting light using a prism in the 17th century inspired a scientist named James Gregory to look more closely at bird feathers, and outline some basic principles for what would become the modern diffraction grating. By 1785, Philadelphia inventor David Rittenhouse had figured out how to build the first diffraction grating by stringing hairs between two threaded screws. In 1821, a German physicist named Joseph von Fraunhofer built a very similar device.

However, these early attempts at building diffraction gratings were rough, and the patterns of parallel lines too imprecise, which limited their usefulness in spectroscopy–an important tool in physics, chemistry, and astronomy. The smaller the distance between those parallel lines, the higher the resolution of the gratings. The man who did the most to improve the precision of diffraction gratings, thereby revolutionizing the field of spectroscopy, was the 19th century American physicist Henry Rowland.

Born in Honesdale, Pennsylvania in 1848, Rowland came from a long line of Protestant theologians, and his family expected him to become a minister. But young Henry rejected the classics and had a passion from the start for science, particularly electrical and chemical experiments that he devised himself. When he was 17, his family relented and sent him to Rensselaer Technological Institute, where he earned a degree in civil engineering in 1870. He briefly worked for the Western New York railway after graduation, and then taught science at the University of Wooster in Ohio. By 1876, he had returned to RPI as an instructor in natural philosophy.

Alas, the professional respect of his peers was not immediately forthcoming. Rowland struggled to have his early scientific papers published in US journals. Frustrated, he sent a paper on his work in magnetic permeability to the eminent British physicist James Clerk Maxwell, who published it in London’s Philosophical Magazine. His US colleagues did not seem to notice.

Rowland was first and foremost a researcher. Years later, at a AAAS meeting in 1883, Rowland declared, “I here assert that all can find time for scientific research if they desire it. But here, again, that curse of our country, mediocrity, is upon us. Our colleges and universities seldom call for first-class men of reputation, and I have even heard the trustee of a well-known college assert that no professor should engage in research because of the time wasted.”

In 1875, Rowland’s luck turned. A man named Daniel Colt Gilman began asking for recommendations for faculty members to join the newly established Johns Hopkins University in Baltimore, Maryland, the first true research institution in the US. One name kept popping up among European scientists: Henry Rowland. Gilman offered Rowland a position at the fledgling university as a physics professor, which Rowland was happy to accept.

Once on board, Rowland embarked upon a tour of European laboratories to glean ideas and purchase any necessary equipment to reproduce similar world-class laboratories back in Baltimore. Among the labs he visited was that of Hermann von Helmholtz in Berlin, where he had a chance to work with the great physicist firsthand and conduct an experiment on the magnetic effect of a charged rotating disc–something he’d never had the means to attempt before. The experiment was a smashing success: Rowland demonstrated unequivocally that a charged body in motion produces a magnetic field.

After getting settled in at Hopkins, Rowland attacked his scientific pursuits with renewed vigor. He avoided teaching and administrative duties as much as possible, in favor of research, and when he did teach, his students were often devastated by his forbidding presence and withering critiques.

For example, he undertook a series of experiments to re-calibrate the value for the ohm, coming up with a much smaller number than the original. (Rowland’s conclusion was accepted as correct.) He also supervised several experiments that led one of his graduate students, Edwin Hall, to discover the eponymous Hall effect.

In other work, he set about re-creating James Joule’s seminal paddle-wheel experiment for measuring the mechanical equivalent of heat. Rowland greatly improved upon the original apparatus: his version was larger, and his experiments were conducted over a wider temperature range, resulting in a much higher number than that obtained by Joule. He also noted that the specific heat of water varied as a function of temperature; Joule had assumed the specific heat would be constant.

Then Rowland became intrigued by diffraction gratings, and decided to try to improve their precision. He invented a “ruling engine”: a machine that employed one main screw to shift the diamond tip used to etch the grating a very small distance between each line during the etching process, done on a concave surface. He went on to use his diffraction gratings in spectrometers to study the solar spectrum, producing an impressive photographic map of that spectrum in 1888. His gratings were orders of magnitude better than others available at the time, and much in demand. He sold hundreds to scientists all over the world. Ultimately, Rowland’s name became so strongly associated with diffraction gratings that one is featured in his official 1897 portrait by artist Thomas Eakins.

There is an apocryphal story that Rowland–while under oath in court as part of a lawsuit he was involved with–once declared himself to be the world’s greatest physicist. In reality, he said he was “the highest known authority in this country upon the subject of the laws and principles of electricity.”

The man who struggled for recognition from his peers ended up being awarded the Henry Draper Medal in 1890 by the National Academy of Sciences, for his contributions to astrophysics. When the American Physical Society was founded in 1899, Rowland became its very first president. Alas, Rowland’s health failed at a relatively young age: he was diagnosed with diabetes shortly after marrying in 1890, and thereafter focused on inventing and patenting various improvements in telegraphy so that he would not leave his family destitute. He died in 1901 of complications from the disease.