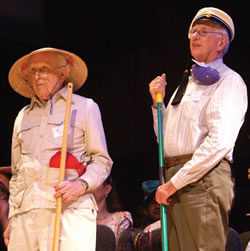 Wearing socks over one’s boots in winter can help with traction on icy surfaces. That is the discovery made by this year’s winner of the Ig Nobel Prize for physics.
“We did a piece of lighthearted research actually, and it arose out of a tearoom conversation one icy morning,” said Lianne Parkin, a physician at the University of Otago in New Zealand and lead author of the research published in the New Zealand Medical Journal.

“Basically the background to it is that we live in a very steep city in the south of New Zealand, and every year once or twice in the winter it gets very very icy and it’s a real challenge not to fall over and some of our fellow citizens have actually responded to this by putting socks over their shoes in these conditions. And at our tearoom conversation we decided actually there was no good scientific evidence for this practice, so we should probably evaluate it by doing a randomized controlled trial, so we did.”

Held each year just days before the actual Nobel Prizes are announced, the Ig Nobel awards are presented to the best of the year’s seemingly silly scientific research. This year marks the 20th first annual Ig Nobel Prize ceremony.

“They honor something unusual. They honor things that make people laugh and then make them think; and that’s the only quality. It doesn’t matter if it’s good or bad or important or not, but it has to, when you first encounter it, make you laugh and then it has to rattle around in your head for a week or so, so after a week the only thing you really care about is telling your two best friends about it.” said Marc Abrahams, founder of the Ig Nobel Prizes.

The ceremony, held in Sanders Theater at Harvard University, is a joke-filled variety show of science wackiness. This year featured a bacterial opera, author Neil Gaiman describing the odds a life form on the back of a book jacket is a bacterium or a writer (roughly three sextillion to one), and Physics Nobel laureates Sheldon Glashow and Frank Wilczek describing how many bacteria can dance on the head of a pin. Three other Nobel laureates, Roy Glauber, James Muller and William Lipscomb were also onstage to shake the hands of the winners. In addition, Lipscomb participated in the contest to win a date with a Nobel laureate.

Though “bacteria” was the theme of the ceremony this year, physics and physicists featured prominently in several of the awards. The prize given for Chemistry went jointly to Eric Adams of MIT, Scott Socolofsky of Texas A&M University, Stephen Masutani of the University of Hawaii and BP, “for disproving the old belief that oil and water don’t mix.”

“It’s fluid physics. What we would call ourselves is fluid mechanicians. Scott and I in particular study plumes,” Adams said.

BP unsurprisingly declined to send a representative to collect their prize and instead an actor dressed as the Emperor from Star Wars stood in.

Alessandro Pluchino and Andrea Rapisarda in the physics and astronomy department at the University of Catania along with sociologist Cesare Garofalo, also at Catania, won in the Management category for their paper “The Peter Principle Revisited: A Computational Study.” In it, the researchers showed mathematically that organizations would be more efficient if they promoted people at random.

Other winners this year included a team from Mexico and the United Kingdom awarded the Engineering Prize for using a radio-controlled helicopter to collect whale snot. The Transportation Planning prize was awarded to a team from Japan and the United Kingdom for using slime molds to find the optimal routes for railroad tracks around Tokyo. Simon Rietveld and Ilja van Beest from the Netherlands won the Medicine Prize for finding that roller coasters can be used to treat asthma. Manuel Barbeito, Charles Mathews and Larry Taylor from the United States won the Public Health Prize for finding that more bacteria cling to bearded scientists than clean-shaven ones. A team from China and the United Kingdom won the Biology Prize for their research into fruit bat fellatio.

The Ig Nobel Peace Prize was given to a team from the UK who proved that swearing while hurt can actually make it easier for individuals to tolerate pain. The economics prize was offered to the executives and directors of Goldman Sachs, AIG, Lehman Brothers, Bear Stearns, Merrill Lynch and Magnetar; however, like BP, no company representatives were sent to collect the prize.