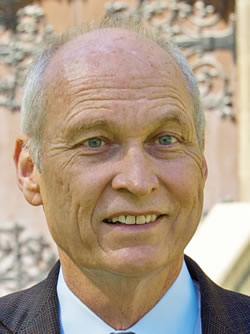 APS members have elected Michael Turner, current Director of the Kavli Institute for Cosmological Physics at The University of Chicago, as the Society’s next vice-President. As the newest member of the presidential line, Turner will become APS President in 2013.

By a decisive margin, the voters also adopted an amendment to the APS constitution establishing four permanent international councilors. In addition, Pierre Meystre of the University of Arizona and Haiyan Gao of Duke were elected as general councilors. Lars Bildsten from the Kavli Institute for Theoretical Physics at the University of California Santa Barbara was elected Chair-elect of the Nominating Committee.

Turner assumes office in January of next year, replacing Robert Byer of Stanford, who moves up to become President-elect. At the same time, current President-elect Barry Barish of Caltech will succeed Curtis Callan of Princeton as APS President. Callan will remain on the APS Council and Executive Board as past-President.

Turner has been a faculty member at the University of Chicago since 1980. With training in general relativity and particle physics, Turner received his PhD from Stanford University. There, he began to explore the connections between particle physics and astrophysics and cosmology. In 1983, he and Edward W. (Rocky) Kolb created the Theoretical Astrophysics group at Fermilab. Turner also is the recipient of an honorary doctorate from Michigan State University.

From 2003 to 2006 Turner led the Directorate for Mathematical and Physical Sciences at the National Science Foundation, and from 2006 to 2008 he was Chief Scientist of the Argonne National Laboratory. Currently, Turner is the Chairman of the Board of the Aspen Center for Physics, a member of the NRC’s Board on Physics and Astronomy and of the Governing Board of the NAS, and a Director of the Fermi Research Alliance, which manages Fermilab for the Department of Energy.

“I am pleased, honored and humbled,” Turner said, “The APS is the premier physics organization in the world, and I am honored that my colleagues think me worthy of this important position.  That being said, I suddenly have the realization that I have my work cut out for me for the next four years.”

Turner added that he plans on focusing on a variety of issues during his tenure. He said that he especially wanted to emphasize the importance of making physics an exciting and rewarding career for young people, and to ensure that the APS continues to be a strong advocate for basic research not just in physics, but for science as a whole. He also wants to look at ways to improve workforce diversity in the field of physics and continue to emphasize the importance of science to the public.

“The scientific opportunities today are different, but just as exciting as ever, from building a quantum computer to figuring out dark energy to solving the biggest problems our planet faces – energy and climate. But there are issues that must be addressed on the practical side if physics is to remain attractive and rewarding, including workforce diversity in physics, the bumpy and uncertain career path from postdoc to a permanent position, and modernizing the physics curriculum,” Turner said.

APS international programs administrator Michele Irwin said the change was prompted in large part by the fact that 25 percent of the society’s membership lives outside the United States.

“Our international members, of which we have a lot, didn’t feel that they were represented and their needs were met,” Irwin said.

Bildsten is a permanent member of the Kavli Institute for Theoretical Physics and a professor at the University of California, Santa Barbara. He received his PhD in theoretical physics from Cornell University in 1991. Bildsten served on two panels during the previous Decadal Survey of Astronomy and Astrophysics and is a member of its current committee. He has served on many recent NRC panels. He was a member of the NSF’s Mathematical and Physical Science Advisory Committee from 2004 until 2007. Bildsten teaches an upper level physics course and is a member of the Board of Directors of the Dos Pueblos Engineering Academy Foundation. Bildsten’s theoretical research spans the fields of stellar astrophysics, gravitational wave phenomena, and stellar explosions.

“Leadership matters, and I will work to identify those capable of addressing the breadth of issues facing society today, from educating our youth, to ensuring that scientific breakthroughs continue to sprout from our colleges, universities and national and private laboratories. Candidates for election to leadership positions in the APS must have this breadth,” Bildsten said in his candidate’s statement.

Gao is a professor of Physics at Duke University, and a Changjiang Lectureship Chair Professor at Tsinghua University. She received her Ph/D  in Experimental Nuclear Physics in 1994 at Caltech. She joined Duke University in 2002. Her research focuses on understanding the structure of the nucleon and exclusive nucleon and nuclear processes at high energies in terms of quark and gluon degrees of freedom.

She has served on the Program Committee and Fellowship Committee of the Division of Nuclear Physics of APS, Panel on Public Affairs of APS, and the Advisory Committee of the Institute for Nuclear Theory. Currently, she is a member of the editorial board of Progress in Physics, and is an associate editor of the European Physics Journal A. She is the Vice President of the Overseas Chinese Physics Association, and a Fellow of the APS.

Meystre is currently a Regents Professor of Optical Sciences and Physics at the University of Arizona. He holds the Chair of Quantum Optics, and is Director of the B2 Institute. He received his PhD from the Swiss Federal Institute of Technology in Lausanne, and the Habilitation in Theoretical Physics from the University of Munich. Following a postdoctoral position at the University of Arizona Optical Sciences Center and nine years as a staff scientist at the Max-Planck Institute for Quantum Optics in Germany, he returned to the University of Arizona in 1986. His research includes theoretical quantum optics, atomic physics, and ultracold science as well as renewable energy and smart grid research and development. He has published over 280 refereed papers. Meystre is past-Chair of the Division of Atomic, Molecular and Optical Physics of the American Physical Society, past-Chair of the National Research Council standing committee on atomic, molecular and optical science, and currently serves on the NRC Board on Physics and Astronomy

“Physics is going through extraordinary developments, with exciting advances at all frontiers of our field, from the lowest to the highest extremes of energy and power, from the smallest to the largest spatial dimensions, and from the shortest times to the age of the Universe,” Meystre said in his candidate’s statement.