PhysTEC Alumni Go Out and Teach 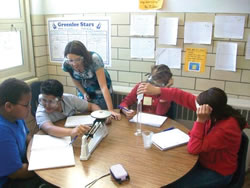 Vera Ananda in the classroom

Thousands of physics teachers swarmed the streets of Portland Oregon in late July for the annual AAPT conference. Among them were graduates of the APS-run PhysTEC program, which seeks to raise the bar for physics teacher education programs across the country.

PhysTEC helps to support colleges and universities that have put together physics education programs aimed at undergraduates who plan on becoming science teachers. Led by APS in conjunction with the American Association of Physics Teachers and the American Institute of Physics, the program recruits future science teachers–mostly undergraduates–and prepares them with strong content and experience with interactive teaching methods.

All told, nearly 200 people have gone through the program since its inception in 2001. The education department of APS is now conducting a wide-ranging study to find out what people who have been trained by the program are doing. Past surveys, conducted each year by contacting the heads of the programs at participating universities, have shown that the large majority have gone on to teach science. The ongoing study will be more in-depth, and will contact past participants directly.

The most recent survey found that 84 percent of people who had gone through the program are either currently teaching or actively seeking employment as a teacher. In total, 62 percent of participants go on to teach physical science to students in grades K-12, while another 15 percent are teaching another subject to K-12 students.

The program emphasizes teaching techniques that draw students into an active learning role. Jessica Clanton went through the program while at the University of Arkansas at Fayetteville. After she graduated with a masters in physics in 2007, she took a job teaching courses at the college level at the Arkansas State College Mountain Home.

“It gave me a student-centered approach to teaching,” Clanton said. “Students have to be involved in the classroom in order to learn…The idea of having students participate in the classroom came from PhysTEC.”

Vera Ananda went through the two-year program at the University of Colorado at Boulder graduating in 2006 with a BA in physics and a teaching certificate. Today she is teaching science to sixth, seventh and eighth graders at the Greenlee K-8 School in Denver. She received the Noyce scholarship offered to juniors and seniors in PhysTEC programs in 2005.

“If it weren’t for the Noyce program, I probably would have had to take out loans and possibly wouldn’t have been able to finish college,” Ananda said. She added also that “I really enjoy how the PhysTEC program keeps you connected after you graduate.” She has traveled to the AAPT meeting in Alberta, Canada in 2008 and the Physics Teacher Education Coalition conference earlier this year in Washington, DC with the help of the program.

The PhysTEC program started as a response to growing concerns about the state of science education in grades K-12. Research conducted by the American Institute of Physics and the Department of Education respectively has shown that two-thirds of new physics teachers have no degree in physics, and less than 15 percent of middle school teachers teaching a physical science majored in the subject.

Gay Stewart of the University of Arkansas has been with the program since its inception and has kept tabs on the issues that her PhysTEC graduates have faced. She said that oftentimes graduates have had to confront both budget issues in the schools where they teach and the lack of an existing science education infrastructure.

“A high quality science classroom takes a lot of effort,” Stewart said, “A lot of administrators don’t seem to realize what they’re doing when they give someone four different science classes to teach.”

PhysTEC has grown and evolved over time as more institutions have gotten involved. It has grown to include the dissemination of materials and models for successful physics teaching, the greater integration of physics departments into the training of physics teachers and the establishment of a network for physics teachers, to interact and share techniques with each other.

“The PhysTEC Program has developed into a successful program that should be widely emulated.” said Valerie Otero, an associate professor of science education at the University of Colorado at Boulder.