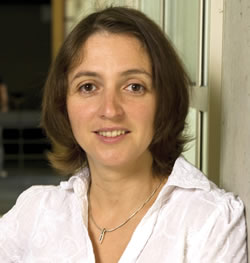 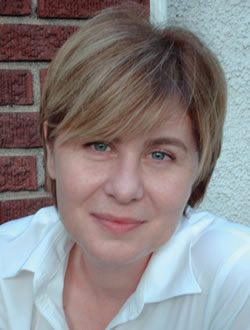 APS recently announced this year’s recipients of the M. Hildred Blewett scholarship. Chosen by the Committee on the Status of Women in Physics, the two are Natalia Drichko at The Johns Hopkins University and Marija Nikolic-Jaric at the University of Manitoba.

The scholarship is dedicated to helping women who are returning to research careers that had been interrupted for family or other reasons. The scholarship is a one-year grant, which can be renewed, of up to $45,000 for use towards a wide range of necessities, including equipment procurement, stipend, travel, tuition, and dependent care. This is the sixth year the scholarship has been awarded.

After taking time off to move half-way around the world and start a family, Natalia Drichko has returned to condensed matter research.

She is originally from Russia and earned her MSc from St. Petersburg State University in 1996 and her PhD from the Ioffe Physico-Technical Institute, also in St. Petersburg, in 2002. She was studying organic conductors and superconductors and traveling back and forth between Russia and Germany as part of the Alexander von Humboldt Foundation Fellowship for her postdoctoral research.

While at a conference in Europe, Drichko met Peter Armitage, an assistant professor at Johns Hopkins University. The two started traveling together and soon fell in love.

“It’s kind of a romantic story in a way. I was still living in Europe and he was living here,” Drichko said.

The two decided to get married and move to the United States. It was a hard decision at first for Drichko to leave her research and move to the other side of the Atlantic. She had only been to the United States twice before, once for a conference, and once while visiting Peter. Back in Europe there was a clear path for her to follow with her career, but the move proved to be a serious interruption.

“You are changing your life completely in every possible kind of way,” Drichko said, “The big thing was kind of just to find a way to adjust to everything.”

A year and a half ago, Drichko gave birth to her daughter. Even after moving and while caring for her child, she continued working to finish up the projects she had started in Germany. However, taking care of her new family member meant Drichko would have to take time away from research. The whole time she knew that she would return to research; it was always just a question of when, not if.

She was fortunate that The Johns Hopkins University had a large condensed matter department and she would be able to carry on research similar to what she had been doing in Europe. She found the faculty at the University friendly and helpful, but starting up from scratch was a huge effort, and she  needed funding to begin. She found information for the Blewett scholarship online and applied.

“This is an amazing opportunity,” Drichko said. “It helped enormously because I can do the research I am very much interested in at a great university.”

She has started researching magnetic ordering in materials related to unconventional superconductivity. With the funds she plans to set up a lab to investigate the properties of these superconductors, including a Raman spectrometer that other researchers in the university could use as well.

The second Blewett scholarship recipient, Marija Nikolic-Jaric, after completing her long delayed PhD, has been able devote herself to her research and is looking forward to a career as a physicist. She is currently a post-doctoral research fellow at the University of Manitoba in Winnipeg, where she is studying biophysical flow cytometry. This is her second year being awarded the Blewett Scholarship.

In 1996, Nikolic-Jaric was just weeks away from defending her thesis when she and her husband received devastating news. He had been diagnosed with a rare and terminal type of brain tumor. Already juggling her thesis, pulling together academic credits from multiple universities and caring for her four-month-old son, Nikolic-Jaric made the difficult choice to put her degree on hold for a while. After her husband’s death the following year, she moved back to Canada to be closer to her parents.

While away, she volunteered at her son’s elementary school, helping to teach math through games. Though she enjoyed working with the students, she wanted to finish her degree and return to research.

“The challenge of research was definitely missing there,” Nikolic-Jaric said, “I knew I had to just go back to what I loved to do the most.”

Nikolic-Jaric continued to work at pulling together her credits at Simon Fraser University in Vancouver. In 2007, the death of her step-father delayed her PhD defense an additional semester. In January of 2008, she was able to defend her thesis and earn the PhD started years earlier.

She said the Blewett scholarship had given her a tremendous psychological and financial boost.

“One of the big worries, which is how are we going to pay for the research, is gone now,” Nikolic-Jaric said.

After receiving her PhD, she started her post-doctoral work at the University of Manitoba researching the behavior of rotating asymmetrical particles in electrical fields. Since then she has moved into other aspects of biophysical flow cytometry, exploring the physical properties of biological material in the context of microfluidics.

With the scholarship she has been able to travel to different academic conferences, including the APS March Meeting and the upcoming MicroTAS in the Netherlands. She also attended the Summer School of Nanotechnology in Edmonton.

In addition to her research as a postdoc, Nikolic-Jaric has been helping the graduate students she is working with. Many of them, especially the women, have the same questions about juggling careers and families that Nikolic-Jaric confronted as a student.