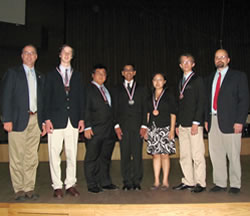 The traveling team representing the United States at this year’s International Physics Olympiad tied with South Korea for 11th place overall. The US team took home one gold, two silver, and two bronze medals from the competition. Senior Dan Li from Alexandria, Virginia placed fourth overall, one of the highest ranks a US individual team member has earned in the last decade.

The Olympiad is an annual international competition for high school students, who vie for the gold by solving complicated physics problems. This year’s competition, held in Zagreb, Croatia from July 17th to the 25th, featured over 400 students representing more than 80 nations.

China, Taiwan, and Thailand tied for first with five gold medals each. Each student is graded individually with gold medals awarded to students with total scores from the five tests in the top 8 percent, silver to students in the top 25 percent and bronze to those in the top half. Team rankings are determined by the number of medals the individuals earn on the team.

The team’s standing was somewhat lower than the United States has typically placed in the last decade. Head coach Paul Stanley of Beloit University said this was largely because the style of questions asked was a departure from previous years.

“In the past decade the exams have grown toward a more cookbook approach, guiding the competitors along a path with small bite-sized questions that facilitated grading of exams at the possible expense of creative solutions,” Stanley said, “This year, the ‘chunks’ were large; students were given information and then asked to assemble it with many possible approaches. In some cases, this made the questions much harder, but it rewarded those with an ability to synthesize.”

In addition some of the theoretical questions featured material drawn from outside the syllabus. The diverse questions asked the students to use Bernoulli’s principle to design a solar chimney, model the nucleus of an atom, and to determine the charge of a metallic object in an electric field. The two experimental questions had the participants find the equilibrium positions between bar and donut magnets and to measure the bending rigidity of different materials.

Despite the difficult questions, Stanley was positive about this year’s showing.

“I was pleased with the US performance. The test was hard,” Stanley said, “Because of the ‘out of syllabus’ questions, teams with more training would likely have been exposed to topics that would give them an edge. If the Croatia style of questioning were to become the new trend, we would likely adapt our training slightly, but in general we feel as if the US team demonstrated the kind of flexibility and quickness to adapt that we want to see in future physicists.”

In addition to participating in the competition, students were able to see the sights of Croatia. The Olympiad sponsored tours of downtown Zagreb, a trip to the official Nikola Tesla Memorial Centre in Gospic and excursions to nearby towns and national parks.

The Olympiad was first held in 1967 in Warsaw, Poland for the nations of Eastern Europe. During the 1970s the competition expanded to the rest of Europe and later the rest of the world. In 1986 the United States sent its first team to the competition in London and returned with three bronze medals, the best any team had done on its first outing.

The American Association of Physics Teachers and the University of Maryland have organized and trained each US team since the beginning. More than a dozen other organizations, including the APS and the American Institute of Physics, help to sponsor the team.