APS Joins the Crowd at Comic-Con 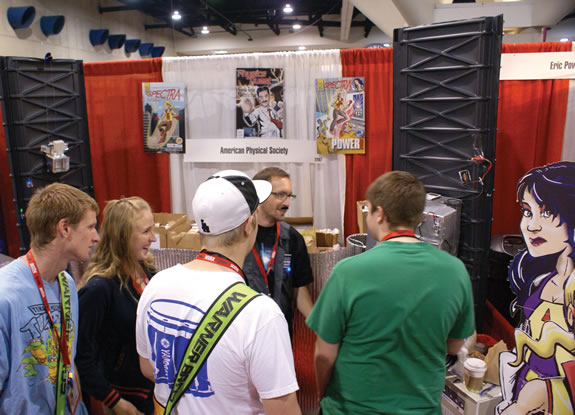 
This July the APS outreach team was given the opportunity to show off their hit comics at the world’s largest comic book convention, Comic-Con International. The 5-day convention in San Diego attracted over 125,000 attendees dressed in many exciting costumes including several decked out as Nikola Tesla. APS participation was featured in both Wired’s “geek dad” blog and the photo section of IMDB. The APS comics, two about laser super hero “Spectra” and one about the life of Nikola Tesla, were widely distributed and universally enjoyed. APS put more than a ton and a half of comics in the hands of these excited comic book enthusiasts, some of whom can be seen in the photo thronging around APS Outreach Specialist Chris Discenza (center, with the fake mustache), while Spectra's nemesis Miss Alignment looks on balefully at right. The event was so successful in connecting with a previously untapped audience that the APS team plans to exhibit at Comic-Con again next year. More information about the comic books, including online copies, is at the APS outreach website PhysicsCentral, www.physicscentral.com.