Circa June 1748: Publication of Analytical Institutions 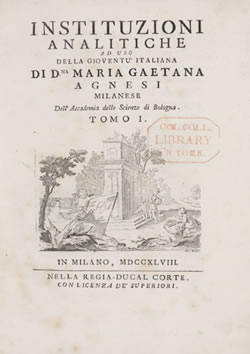 Renaissance Europe, for all its splendor, did not offer many scholarly opportunities for women, unless they chose to join nunneries. A notable exception was Italy, which espoused a more enlightened view that allowed a few women to flourish in the arts, medicine, literature, and mathematics. Among the most notable of mathematically minded women of the era was Maria Gaetana Agnesi.

The eldest of 21 children–her father married three times–Agnesi was born in 1718. She was very much a child prodigy, known in her family as “the Walking Polyglot” because she could speak French, Italian, Greek, Hebrew, Spanish, German, and Latin by the time she was 13. By her late teens, she had also mastered mathematics.

Agnesi had the advantage of a wealthy upbringing; the family fortune came from the silk trade. She also had a highly supportive father, who hired the very best tutors for his talented elder daughter. Unfortunately for the shy, retiring Agnesi, he also insisted she participate in regular intellectual “salons” he hosted for great thinkers hailing from all over Europe. The young Maria delivered an oration in defense of higher education for women in Latin at the age of 9 (she had translated it from the Italian herself and memorized the text).

There is evidence from contemporary accounts that Agnesi loathed being put on display, even though her erudition earned her much admiration. One contemporary, Charles de Brosses, recalled, “she told me that she was very sorry that the visit had taken the form of a thesis defense, and that she did not like to speak publicly of such things, where for every one that was amused, twenty were bored to death.” When her mother died, Agnesi took over running the family household, giving herself an excuse to withdraw from participating in these gatherings.

De Brosses admired her intellectual prowess greatly, and expressed his horror upon learning that she wished to become a nun. Agnesi did, eventually, become a nun, but not before spending 10 years writing a seminal mathematics textbook, Analytical Institutions, which was published in 1748. She started writing when she was 20, intending it to be a textbook for her younger brothers.

Largely self-educated, Agnesi had the good fortune to find a mathematical mentor in a monk named Ramiro Rampinelli, a frequent visitor to the Agnesi home, who directed her study of calculus. He also encouraged her to write a book on differential calculus, giving rise to Analytical Institutions. And through his influence, she was able to gain the input of Jacopo Riccati, one of the leading Italian mathematicians of the day, while writing her seminal manuscript. She revised the draft text to incorporate Riccati’s comments.

Thanks to her father’s wealth, Agnesi arranged for a private printing of the book, ensuring she could oversee its publication. The two-volume text ran more than 1000 pages. Volume one covered arithmetic, geometry, trigonometry, analytic geometry and calculus. Volume two included discussions of infinite series and differential equations. In the preface, Agnesi paid tribute to her monkish mentor, declaring that without Rampinelli’s help, “I should have become altogether entangled in the great labyrinth of insuperable difficulty… to him I owe all advances that my small talent has sufficed to make.”

One of the geometric curves featured in Analytical Institutions is the Witch of Agnesi. Agnesi dubbed it la versiera, a nautical term meaning “a rope that turns a sail”–an allusion to the motion by which the curve is drawn. At some point, a harried English translator misinterpreted the word as l’avversiera, “she-devil” or “witch.” Agnesi did not invent it; Pierre de Fermat and Guido Grandi also studied this curve in 1703. It was of interest to mathematicians keen on exploring the relationship between plane geometry and algebraic expressions, as well as the relationships between plane geometry and differential calculus.

Among other phenomena, this curve describes a driven oscillator near resonance; the spectral line distribution of optical lines and x-rays; and the amount of power that is dissipated in resonant circuits. Today, Agnesi’s curve is used primarily as a modeling and statistical tool. Some computer models for weather and atmospheric conditions, for example, use Agnesi’s curve to model topographic peaks of terrain. It can also be used as a distribution model, substituting for the standard bell curve model in statistics. It can be difficult to integrate over a specified range using the bell curve; the Witch of Agnesi’s algebraic expression is relatively straightforward in contrast, and thus easier to integrate.

Most biographies, while admiring, feel compelled to note that Agnesi’s seminal tome contained “no original mathematics.” Her accomplishment was noteworthy in part because Agnesi’s gift for languages enabled her to read mathematical papers from around the world and synthesize those works in a single text. Notably, Analytical Institutions was the first tome discussing calculus that included the very different methods developed by co-inventors Isaac Newton and Gottfried von Leibniz.

Because it was one of the first and most complete treatises describing finite and infinitesimal analysis, Analytical Institutions caused a stir when it first appeared. A committee of the Académie de Paris praised her work: “It took much skill and sagacity to reduce… to almost uniform methods these discoveries scattered among the works of modern mathematicians, and often presented by methods very different from each other. Order clarity and precision reign in all parts of this work. We regard it as the most complete and best made treatise.”

The book also won her the admiration of Pope Benedict XIV, who had studied mathematics in his youth. Because of this, Agnesi was the first woman to be appointed as a mathematics professor at a university–the University of Bologna–although there’s no record she ever formally accepted the position.

When her father died in 1752, Agnesi abandoned mathematics and focused on charitable work, founding two homes for the poor and sick, in 1759 and 1771, respectively. By 1783 she headed a home for the elderly. She died a pauper in 1799, having given away everything she owned.