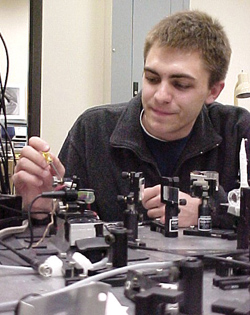 James Scholtz, then undergraduate at Stony Brook University, adjusts a laser diode on his project at the Laser Teaching Center.

Demonstrating the importance of lasers to the public is one of the goals of LaserFest, the 50th anniversary celebration of the invention of the laser. At the March Meeting’s “LaserFest: Laser Education and Outreach” session, physics teachers showed off how they use lasers as outreach and education activities.

“A key audience for LaserFest is kids,” said APS’s head of public outreach Becky Thompson, who organized the session, “We wanted to highlight both what APS was doing for laser education and give meeting attendees a chance to learn about successful outreach in general.”

Lasers have been a big part of undergraduate research labs for years. Chad Orzel, a professor at Union College, described at the meeting how he often uses laser experiments to show his students their importance to scientific measurements.

“The most impressive applications in science and physics are in precision measurement,” Orzel said at his talk, “The world’s best measurements mostly involve lasers.”

During lab sessions, Orzel has his students conduct experiments designed to explore the same fundamental premises that are used in current cutting edge research. His freshman students measure the speed of light by timing how long it takes to reflect back from the far side of the room, akin to measuring the distance from Earth to the moon with laser range finders and retro reflectors. His more advanced students build their own interferometers that are essentially simpler versions of LIGO, and take the laser spectrum of rubidium using the same principles that atomic clocks operate on.

“It’s something that can get the basic idea of lasers as important tools for precision measurements across to students,” Orzel said.

This idea of learning by doing is also central to the teaching philosophy at Stony Brook’s Laser Teaching Center. Completed in 1999, the center has an assortment of lab stations and equipment geared towards teaching the physics of optics to graduate, undergraduate, and even high school students.

“We teach optics,” said Harold Metcalf, a professor at the university and one of the founders of the center, “You can see light. It’s extremely important for the students to see what’s going on without a lot of equipment in the way.”

Converted from an empty hall beneath the offices of the Department of Physics and Astronomy in the Physics building, the center offers students a chance to work on hands-on optics projects. The high school students who attend are usually part of the lab’s summer program and use the lab to work on science fair projects. Many students have been finalists and semifinalists in national competitions. Undergraduates often use the lab to do extra credit work and other research, while graduate students participate in an “Optics Rotation” course.

The University of Oregon’s SPICE summer program is a science summer camp with a special emphasis on optics, aimed at encouraging middle school girls to participate more in the sciences. The Science Program to Inspire Creativity and Excellence (SPICE, formerly the Optical Science Discovery Camp) is a weeklong day camp that combines optics education with summer camp fun.

More importantly, she said, the camp is working to help to close the gender gap in the physical sciences. Research has shown that exposing girls to college level science concepts as early as middle school greatly improves the likelihood they’ll stay in the sciences. Though no male applicant has ever been turned away from the SPICE program, the organizers primarily recruit girls in middle school to participate.

Paul Guèye at Hampton University is also working to bring more underrepresented groups into the physical sciences. Working with both the National Society of Black Physicists and National Society of Hispanic Physicists, Guèye has brought the science ambassador program to hundreds of elementary school students in dozens of predominantly minority and underprivileged classrooms across the country.

“The most important thing is fun. You don’t want to do something boring,” Guèye said.

These science ambassadors travel with physics demonstrations to classrooms in areas with limited resources, in order to show students the fun of physics experiments. Since its inception, the class has expanded from reaching 25 students in 2005 to over 400 in 2009. Guèye said that they hope to continue to expand the program using funding from LaserFest on the Road grants to incorporate more optics into their demonstrations.
One of the attendees at the session was Sean O’Malley of Rutgers University. He received a LaserFest on the Road grant to develop a suitcase of laser demonstrations he could take from school to school in the vein of an old fashioned traveling salesman.

“I’m selling to them the wonder of lasers,” O’Malley said.

One of the most attention-grabbing demonstrations he plans on including in his kit is a YAG laser used to remove tattoos from a piece of mounted pig skin. Other demonstrations he is working on that show off the applications of lasers are a scaled-up mockup of a CD/DVD player and a laser used to grow thin films by means of pulsed layer deposition.

“I’d like them to be inspired,” O’Malley said, “Kids in general are naturally curious. It doesn’t matter what their ethnicity is or their background is; they’re curious.”