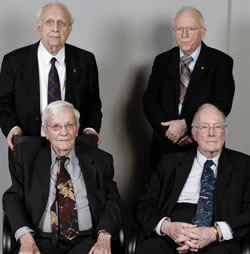 The scientists gathered to congratulate and express gratitude to “Nico” for not only his contributions to science, and in particular the laser, but to their own careers as well. Most of the speakers at the conference were “one degree” away from Nico in some way, either as his former student or colleague, and were referred to with affection by Marlan Scully as the “Nicolettes.” Nico, who served as President of the APS in 1991 and published more than 300 papers, has been a trailblazer in nonlinear optics. A highlight of the meeting was when all of the attendees sang Happy Birthday to the physicist, followed by the cutting of an enormous cake.