By Danielle Lieske and Sunita Srivastava 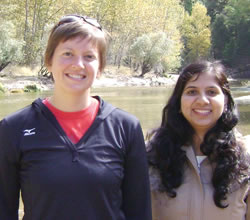 In 2008, the APS and the Indo-US Science and Technology Forum (IUSSTF) issued its first call for proposals for a new program to sponsor the exchange of physicists and physics graduate students between India and the United States. The Professorship Awards in Physics permit professors from India and the United States to deliver short courses or a lecture series in the other country. The Physics Student Visitation Program provides both scientific training as well as cultural experiences while graduate students pursue a breadth of opportunities such as attending a summer institute or conducting research in a host professor’s lab. The first round of proposals yielded two especially interesting applications–in order to build an ongoing collaboration between their laboratories, two professors applied to “exchange” their graduate students between Stanford and the Indian Institute of Science.  Each new to the other’s country, the two students have given an account of their studies and impressions of their host country.

Danielle Lieske:  From Palo Alto to Bangalore
In the fall of 2008 I received an email from Gerry Fuller, my PhD advisor, with the text “would you be interested in visiting India” and attached information about the  India-US Physics Student Visitation Program (co-sponsored by APS and the Indo-US Science and Technology Forum). Gerry had just returned from a visit to the Indian Institute of Science (IISc) in Bangalore. During his visit, he met Jaydeep Basu and they realized that each lab specializes in characterizing interfacial phenomena from a different perspective. After
some discussion, they agreed that it would be mutually beneficial for each of them to send a student on a two-to-three week visitation to the other’s lab.

As many graduate students would be, I was very excited at the prospect of visiting another lab, particularly one in India. I began to work on the application immediately. A few months later we heard that both Sunita (Professor Basu’s PhD student) and I were awarded the grant, and we began to plan our trips.

Several of my friends have visited India and I have heard stories, both good and bad. As Professor Basu mentioned on the first day of my visit, Americans often react to India in one of two ways: they either love and embrace the experience or find India to be overwhelming. Knowing this, I was a little apprehensive about my trip, but also excited.

Sunita visited Stanford first. The work went smoothly and we were able to complete all the experiments on her list. We got along very well and had many good discussions on both scientific and personal subjects. She showed me how to cook paneer and I took her to Santa Cruz and Yosemite National Park.

A month later, after traveling for 24 hours, navigating the H1N1 health check point, clearing Indian customs, and walking the gauntlet of aggressive drivers at the airport, I arrived in Bangalore. Already a bit overwhelmed, I was excited to see Sunita waiting for me outside the airport. The next day she, along with her brother, sister, and best friend took me out into the city.

To say that India is an assault on the senses is absolutely true. There are people everywhere and each of them are dressed in beautiful, bright colors from head to toe. The food is spicy and the noise of traffic and smells of exhaust are inescapable (at least in Bangalore). But what I had not heard about India and was constantly impressed by is that Indians are unbelievably generous and welcoming. The tiniest personal connection to somebody gained me enormous amounts of help and welcoming. During my visit, Sunita was an amazing host. She took me with her to go sari shopping, went with me to visit a Hindu temple, took me to see a Bollywood movie, and for several other adventures. But not only did she accompany me on all these trips off campus, but her labmates and brother and sister came along as well. All of them were very conscious of me; they carefully shepherded me through traffic, made sure my food was cooked with American (i.e., no) spice, etc. And it was this personal connection to the country and the culture that made my trip so amazing.

On a professional note, I was thoroughly impressed with the level of science and the facilities present at IISc. Although IISc is a much smaller university than Stanford, they have access to most major pieces of equipment that I could think of (within my field, anyway). Professor Basu’s group also had a wonderful atmosphere. Not only did the students continuously engage in discussions about their research, but they were all clearly good friends, an attitude that was extended to me the first day I arrived. My experiments went smoothly thanks to the assistance of several students in the group, and I collected enough data for a publication.

Although I had entered this adventure with some trepidation, the overall experience was incredible. I can see that alone and without the guidance of a local, India would be a difficult and sometimes frustrating place to navigate. But as it was, my trip was wonderful, mostly thanks to the generosity of Sunita and her friends. In addition to getting acquainted with a small piece of India, what I most appreciated about this experience was the reciprocity. Getting to host Sunita and show her my home in California, then traveling to see her home in Bangalore created a much stronger bond between us than if only one of us had traveled. It was an experience that I will always cherish.

Sunita Srivastava:  Indian Institute of Science to Stanford
I came to know about the Indo –US student visitation program, when Prof. Gerry visited our lab after giving a very interesting talk on interfacial rheology in the Physics Department of the Indian Institute of Science. At this time I was working on the very difficult and challenging experiment of understanding the rheology of polymer monolayers under mechanical strain. We (I and Prof. Basu) were amazed with the results that I had gotten and were in the process of understanding the physics of the obtained data. There was no scientist better than Prof. Gerry to discuss them with, and for that reason Prof. Basu had invited him to visit the lab. I explained all the results to him and he was interested in them. We realized that further interfacial stress rheometer (ISR) measurements would be useful to have better insight into the physics. During this conversation Prof. Gerry came to know about the advanced facilities at IISc, which he thought were required for the work of some of his graduate students. This is how the seed of collaboration was sown between the two labs. After discussions with Prof. Gerry, Prof. Basu suggested that I find out the details of the visitation program. I was really excited about the potential opportunity and in the excitement it did not take me much time to find the details and place the application.

It was the month of December and I was enjoying official holidays at home when I got an email from Michele Irwin that my application had been accepted. Nothing more could make my holidays than this news. After my leave, when I was back at IISc, I began scheduling the trip and experimental plans. This was my first very involved interaction with an international group and I had a very good and satisfying experience for the full process.

I visited Stanford first. Danielle was there at the airport to pick me up in her car. She was very careful to first take me to the Indian grocery store so that I was comfortable with my food. She took me to Prof. Gerry’s home and showed me around the house. First instant I was surprised to realize the type of hospitality I received from Mary (wife of Prof. Gerry). She took care to offer me all the food (fruits, drinks etc.) in her kitchen during my stay. Being from India, where I am always with my friends, the company of Mary and Prof. Gerry in their home made me feel less lonely. They took me for a Hollywood movie and dinner outside. My discussions over the dinner table with Mary continued for hours, we discussed wide areas like politics, culture, society, etc. of two of the biggest nations in the world. Prof. Gerry took great care in both my academic and personal issues. He lent me his four gear bike to ride, which was again a very exciting experience. He gave me lots of time to discuss my ISR results in spite of his many engagements at his home and in the office.

All of my travel was full of learning new experiences. The most important thing that I cherish now is I got to meet a person like Danielle. Now she is not just a professional collaborator of mine but also a very good friend. I spent lots of quality time with her discussing several issues and sharing opinions. She took me to visit Yositemite National Park, The Mystery Spot, and Santa Cruz Beach along with her husband Chad, uncle and aunt. The two most wonderful experiences were the volleyball match at Stanford University and the visit to the park. I also enjoyed cooking Indian food at Danielle’s home and getting introduced to her sweet pets.

From the professional side this trip was again very productive for me. I got to learn the advanced technique of interfacial rheology and interact with a few group members in Prof. Gerry’s Lab and others. I did several experiments and am now in the process of writing a manuscript for publication.

Altogether the exchange program helped to build up a strong collaborative bond between both the labs. We got to know the working culture and scientific environments more closely, which would not have been possible without actually being able travel to the place and sharing the experience. It was an experience which both of us, I and Danielle, will always appreciate and make an effort to carry forward in our scientific careers.