The Dawn of the Demo: Demonstrations Are Changing Physics Outreach and Education 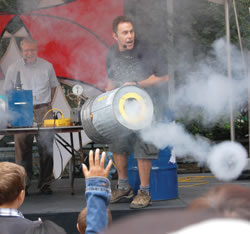 Dave Maiullo (center) blasts the audience with his smoke-ring cannon.

The science auditorium at Rutgers University only seats 330, but over 400 people sat on the floor and squeezed into the aisles for two hours, just to see Dave Maiullo perform. He’s not a movie star and he doesn’t play guitar, but Maiullo does know how to put on a show. And he’s just one of a growing number of people who are packing in crowds and engaging students with the power of physics demos.

The word “demo” was once just a short way of saying “demonstration,” but in physics outreach and education, it’s taken on a new meaning. A “demo,” according to Maiullo, is a system or a physical set-up where one parameter can be easily adjusted, and all others remain the same. The demo leader adjusts that parameter, playing with high and low and in between, in order to illustrate some physics concept.

“There’s a lot of teaching that goes on if demos are done correctly,” he said. “You don’t want to hide any of the physics, but you can jazz it up in lots of different ways and make something that’s eye-catching. That creates a memory trigger, and those are great for educating.”

Take, for example, a demo that Maiullo did in a video for The New York Times online. The set- up is a glass beaker placed next to a speaker that lets out one steady note with an adjustable frequency. Maiullo tunes the frequency of the sound waves until they reach the resonant frequency of the glass, and in a startling burst, the beaker shatters. 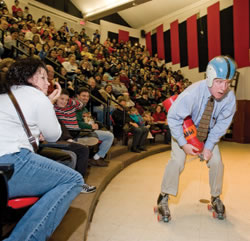 
But that’s one of the more mild demos that Maiullo has in his arsenal. There’s the smoke ring cannon built out of a garbage can, or the liquid nitrogen trapped in a plastic bottle that explodes and lifts a garbage can ten feet in the air. One of Maiullo’s specialty demos is sandwiching himself between two beds of nails, having someone walk on the top one, and then having someone smash a brick that’s placed on top of him. There’s smoke, fire, flashy lights and explosions. There’s one demo known simply as “the glowing pickle” that involves two electrodes and usually leaves behind an odd smell. “Are some of the things we do bigger and flashier than they need to be? Probably,” states Maiullo. “Is it more of a memory trigger if it’s bigger and badder? Definitely.”

Maiullo is officially the Physics Support Specialist at Rutgers, and one of a growing number of “professional demo people.” He spends part of his day refilling chalk and adjusting projectors for the Rutgers physics and astronomy professors, and the rest of his time designing, building, and setting up demos. His popularity among the general public has soared thanks to public demo shows that Rutgers now puts on every year. In an effort to thin out the packed crowd, they added a third performance this year, but that only encouraged even more people to come.

Rutgers isn’t the only university doing demo shows, and it's not just friends of academia who are interested in seeing them. At a public demo show in a bar in Brooklyn, a hip-looking crowd of New Yorkers watched Maiullo smash items he dipped in liquid nitrogen. This was the third physics demo show that was put on in the city this year, and some of the venues have turned away more people than they can seat. The New York Times reported back in 1997 that one bar tried to mix the physics demos with music performances, but the audience ignored the bands.

“YouTube and shows like MythBusters have really increased public interest in physics demos,” said Maiullo. “I think a lot of people of my age or even older than me, and I’m just about 50, remember Mr. Wizard. He was on public television doing different physics or chemistry demonstrations. And for a long time, that was all the access people had.”

That was also the only resource that demo people like Maiullo had, up until twenty-five years ago when the American Association of Physics Teachers (AAPT) put together an auxiliary group who were doing demos, and called it the Physics Instructional Resource Association, PIRA. About ten years after its initial formation, the dawn of the Internet allowed the group to set up a website where they indexed physics demos and organized them by the concept they illustrate, and created online discussion areas where people could share ideas and ask questions. With the debut of the website, the group immediately saw a boom in physics demo shows around the country, and Maiullo says it was then that demos began to change from a hobby into a profession.

Associate Executive Officer of AAPT Bo Hammer praises PIRA for playing an important part in making demos that are accessible to physics teachers. Demos are becoming an ever more popular and important tool in inquiry-based teaching, the method of teaching by asking questions rather than lecturing. Hammer says the workshops offered by PIRA at the AAPT semiannual meetings are the primary way that teachers can learn about demos and how to do them in their classrooms.

“Demos lift the physics out of the textbook and make it much more real,” says Hammer. “And then the next step is to actually let students manipulate the demo or the device themselves. Then they start to get an intuitive sense of how things work.”

Hammer also serves on the APS Committee for Informing the Public (CIP), which serves physicists who want to do outreach with the general public. He says some physicists are just eager to connect with the public, and to share their excitement about the work they do. For others, outreach has become a requirement they must fulfill for their jobs or their funding agencies. The broader outreach criterion of the National Science Foundation, for example, now requires its major grant recipients to not only do research, but find a way to connect that research to society.

The CIP works with the APS Outreach Department, headed up by Becky Thompson. The goal of both the committee and the department is to provide APS members with the resources and infrastructure they need to do a public outreach project.

“A lot of APS members want to get out there and engage the public about the things they’re so excited about,” Thompson said. “And a lot of times that comes back to doing demos. The goal of outreach is to get people interested in physics, and of course an easy way to do that is with things that are flashy and go ‘bang!’”

Thompson illustrates another impact of the growing demo culture: encouraging physicists who want to enter the field of informal education, which refers to jobs like Maiullo’s as opposed to teaching in a traditional classroom setting. Thompson started doing demo shows at local schools while she was working on her PhD, and got hooked.

“The revelation came when I realized I could do this as a career,” Thompson said. “I didn’t want to do formal education at all, but this was exactly what I wanted to be doing. And I don’t think people realize how many jobs there are for PhD’s in informal education, especially in museums.”

Teachers and physicists interested in doing demo shows or other outreach projects are encouraged to contact the APS Outreach department. Thompson and the APS Outreach department compiled an Outreach Guide with sections such as “So You Want to Do a Physics Demo,” which can assist in setting up teachers, educators or professors with demos depending on the resources they have available. But the guide also includes tips about setting up public lectures, science cafes (which Thompson says are currently “in vogue”), open houses, and working with museums. Maiullo published a book in 2009 titled A Demo a Day: A Year of Physics Demonstrations, outlining physics demos that can be done in a classroom.