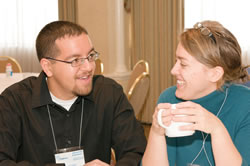 Joel Corbo and Angie Little of the University of California, Berkeley's Compass Project share a morning conversation at the PhysTEC Conference.

The sixth annual Physics Teacher Education Coalition (PhysTEC) Conference took place in Washington, DC in mid-February, just prior to the APS “April” Meeting. The conference is the largest gathering in the country dedicated to physics teacher preparation, and for the fourth straight year attracted over 100 participants, many of whom battled record-breaking snow storms and travel difficulties to get to the event.

The theme of this year’s conference was “Diversity in Physics Education: Preparing Teachers for the 21st Century.” In two panel discussions on Friday that focused on issues in urban and minority-serving schools, participants got a chance to hear the perspectives of young teachers in urban classrooms as well as faculty members at urban institutions. Another workshop led by Duane Merrell of Brigham Young University tackled the very different challenges of rural physics education.

Other conference sessions focused on the persistent achievement gap between richer and poorer students, as well as between underserved minority students and the rest of the US population. A panel of faculty and teachers discussed the preparation not just of teachers but of teacher leaders who will address such inequalities by becoming change agents in the educational system. Michael Marder, a physics professor at the University of Texas in Austin, presented data on the achievement gap in Texas, a state that often sets national standards in education. A group of graduate and undergraduate students from the UC Berkeley, discussed the Compass Project, which aims to increase diversity in the physical sciences.

The conference also featured a number of highly visible national efforts in science and mathematics teacher preparation. Marder, who co-directs the University of Texas’s UTeach Program, led a workshop on the UTeach replication effort, which supports thirteen universities to develop programs modeled after the one at Texas. Following that, Joseph Heppert of the University of Kansas led a workshop on UKanTeach, the UTeach replication effort at his university.

Another highlight of the conference was a workshop on the “Chemistry Teacher Education Coalition,” which is a PhysTEC-inspired effort by the American Chemical Society to engage chemistry departments in teacher education. As in years past, the Association of Public and Land-grant Universities also had a strong presence. The group organized a reception for conference attendees whose institutions are members of the Science and Mathematics Teacher Imperative, a group of public research universities that have committed to increasing the number of science and math teachers they prepare.

Many attendees stated that they appreciated the networking opportunities with other members of the teacher preparation community. “It’s great to be around a group of people who care about the same things I do,” said Vera Margoniner of California State University, Sacramento, who was attending her third PhysTEC Conference.

“The fact that 80 percent of those who registered showed up in spite of the extreme weather is a testament to the dedication of the PhysTEC community. Many of our presenters and attendees had flights canceled several times, and still managed to get to the conference,” said Monica Plisch, the Assistant Director of Education at APS and the conference’s lead organizer.

PhysTEC is a coalition of 180 universities, colleges, and national labs. It is part of the PhysTEC project, which is run by APS and the American Association of Physics Teachers, with National Science Foundation support.