Closing In on Dark Matter and High-Energy Cosmic Rays 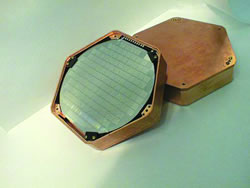 Closeup of a ZIP detector in its mount. A detector of this kind, made of Si, was operated in the 1998 run. The photolithographically-fabricated thin film on the surface is the phonon sensor and represents a significant advance over the detectors used in the 1999 run. Silicon and germanium ZIPs, weighing 100 g and 250 g respectively, will be used in future CDMS II runs at Stanford and in the Soudan mine.

The vacuum of outer space is not quite as empty as one might believe. Exotic particles fly through the interstellar void, continually bombarding Earth from all directions. Physicists at the “April” Meeting presented the latest discoveries made here on Earth about these astronomical sojourners.

Cosmic Rays
High energy protons careen through the cosmos as so-called cosmic rays. Though first identified early in the 20th century, their origins have largely remained a mystery. Now, Stefan Funk from the Kavli Institute for Particle Astrophysics and Cosmology thinks he might have discovered their source. Using data from NASA’s Fermi Gamma-ray Space Telescope, he has been able to pinpoint supernovas as the likely cause of this interstellar radiation.

The term “cosmic ray” is a misnomer, as the radiation detected on Earth is from high energy protons traveling though space, not electromagnetic radiation. Because these “rays” are in fact charged particles, interstellar magnetic fields deflect them, making it difficult to pin down their origins. Funk says that the key to finding their source lies in cosmic gamma rays.

The force from exploding supernovas accelerates protons to velocities near the speed of light. When these high-energy protons collide with interstellar gases, they create short-lived pions that then decay into gamma rays. Funk says that the sources of cosmic rays would thus produce large amounts of gamma rays. As the paths gamma rays travel are unaffected by magnetic fields, the sources of cosmic rays can be inferred by looking for signature gamma ray emitters in space. Using the Fermi Telescope, the team found such strong gamma rays emanating from supernova remnants, including Cassiopeia A, W51C and W44.

“Shock waves of these giant stellar explosions in our galaxy are cosmic accelerators way beyond LHC energies.” Funk said, “We can’t distinguish [the source] just from the gamma ray detection; we have to look at other data. But if you put all the pieces together it seems that we are looking at gamma rays from accelerated protons.”

Dark Matter
Gravitational observations of distant galaxies show that there is a tremendous amount of mass in the universe unaccounted for. Analysis has shown that this dark matter, so called because it doesn’t emit any detectable electromagnetic radiation, is five times as abundant as ordinary matter.

Dark matter is theorized to consist of Weakly Interacting Massive Particles, or WIMPs. Despite their abounding numbers, they have proven to be among the most difficult of all the exotic particles zipping through the cosmos to isolate. However, physicists think they are getting close.

The Cryogenic Dark Matter Search, with detectors located deep in an old iron mine in Soudan Minnesota, is set up to detect some of the subtle interactions these WIMPs have with normal matter. Similar to neutrinos, the theorized WIMPs can pass through a tremendous amount of ordinary matter without interacting with any of it. However, once in a while a WIMP will impact the nucleus of an atom, sending it recoiling into other atoms. Sensitive detectors made of crystal germanium the size of a hockey puck, buried deep in the mine are looking for signs of this subtle reaction.

“Every once in a while there’s an interaction,” said Angela Reisetter from the University of Minnesota and a member of the dark matter search, “From a single nucleus recoiling, all this stuff happens which can be measured throughout the detector.”

In early February, the group announced that the detector had registered two anomalous signals. These readings were inconclusive as to whether the culprit was an elusive WIMP or merely background.

She said also that the search was continuing. The team was in the process of installing more sensitive detectors in the mine. After they’re in place and calibrated, the search will run for about a year starting in the fall, with new results expected at the end of 2011 or early 2012.