The APS Register of Historic Sites 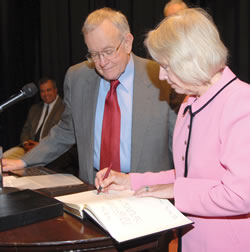 At the presentation ceremony in honor of Joseph Henry, John Rigden looks on as the Head of the Albany Academy, Caroline B. Mason, signs the APS Ledger of Historic Sites.

In the history of the United States there are events that have become part of the folklore of the nation. They bind us together as a people, they remind us where we have come from, and they inspire us to think beyond our immediate concerns. Here is a personal example. One day, walking along Vanderbilt Avenue toward 44th Street in mid-town Manhattan, I saw a plaque on the wall of the Yale Club. I went over to see what the plaque was about. It informed me that “At the British Artillery Park near this site Nathan Hale…was executed on the morning of September 22, 1776. His last words were, ‘I only regret that I have but one life to lose for my country.’”

I stood there caught up with that message. I do not remember what was going on in my mind when that plaque interrupted my thoughts, but I do know that for some minutes after continuing on my way, I was thinking about Nathan Hale, the Revolutionary War, and the forefathers of the United States. The plaque had done an important job: it reminded me that people sacrificed to establish the United States and that I am the beneficiary of that sacrifice.

In 1966, the National Historic Preservation Act established the National Register to honor sites of historical significance and place a plaque at the site. The American Physical Society has initiated a similar program that has the potential of doing for the public what the Nathan Hale plaque did for me. In January 2004, the APS Historic Sites initiative was established on an ad hoc basis, a committee was named, and site selection began. Bronze plaques were ordered, appropriate citations inscribed on them, and soon plaques were being mounted at the honored sites.

When the HSC began its work, we recognized that there were sites where new frontiers of physics were established and thus had national and international significance. Often the events at such sites occurred deeper in the past. These sites were obvious candidates for selection. We also recognized that there were sites where important contributions to physics were made, but which had a more local significance. The committee decided to start with “obvious” sites. Seventeen sites have been selected.

In the third round
University of California, Berkeley: E.O. Lawrence, The Cyclotron
Cornell University: Birthplace of Physical Review
University of Illinois: BCS Theory

In a ceremony at these sites, a bronze plaque is presented by the APS President or President–Elect to a top-level administrator at the site, and the event is recorded in the APS Ledger of Historic Sites. The ceremony itself is an opportunity for the site being recognized to put physics on display and to connect with both the campus and local communities. Sadly, however, this opportunity has often been ignored. Although we do not need to showcase physics to other physicists, unfortunately it is physicists who typically make up the audiences at the plaque-presentation ceremonies. There was one notable exception.

At Case Western Reserve, Lawrence Krauss organized an outstanding event. The plaque ceremony was embedded in a program of well-known speakers and a panel discussion. The program was held in Severance Hall, home of the Cleveland Symphony. Physics was put on display before an audience of some 1,500 people. (At the other extreme, one plaque was presented before an audience of two–both physicists!)

Another audience that witnessed the presentation of the APS plaque was noteworthy: this audience, all high school students, filled a large auditorium. When Joseph Henry discovered self-induction in 1832, he was a high school teacher at The Albany Academy. For eleven months of the year, Henry’s laboratory was a classroom. He could do his research only during the month of August. He was right on the edge of his discovery in 1831 when, once again, he had to interrupt his research and transform his laboratory back into a classroom.

Each plaque contains a brief citation that identifies what happened at the site. Following are three illustrative citations:

For the California Institute of Technology
Near this site, in August 1932, Carl David Anderson photographed the track of a cosmic-ray particle in his cloud chamber. He identified this particle as the positron–the first known antiparticle. Historic Physics Site, Register of Historic Sites American Physical Society

And finally, for the University of Illinois
In this building, the home of the University of Illinois Physics Department from 1909 to 1959, John Bardeen, Leon Cooper, and J. Robert Schrieffer created the “BCS” Theory of Superconductivity, a great achievement of theoretical physics, in 1956-57. Historic Physics Site, Register of Historic Sites American Physical Society

People are curious, and many individuals who see a plaque mounted on a building will want to learn what it says. If plaques with citations like those above are located where pedestrians– pedestrians other than physicists!–can see them, they are likely to wander over to learn what the plaque is all about. While reading the words on the APS plaques, these individuals will be reminded that, over the years, physicists have opened the cupboards of Nature and have learned the mysteries that Nature offers. People reading the plaque near the horn antenna will remember that the universe started with the Big Bang and that evidence for this is the cosmic microwave background radiation discovered with the big horn they are standing near. The horn’s large size will impress many viewers, and they might wonder whether something big, is required to discover something big, such as the radiation that fills the whole universe. Whatever they think, the experience will stick with them for some time.

Or consider a person spotting the plaque at Caltech. On reading the plaque, that individual will be reminded that the material world is made up of individual particles, that in addition to ordinary particles there are anti-particles, and that anti-particles make up antimatter; at the same time, they will be informed, perhaps for the first time, that there are particles called cosmic particles which, as the name implies, come to Earth from outer space, and that some of these particles are anti-particles. Questions undoubtedly will assert themselves: What are cosmic particles? Where do they come from? What is the positron? And who knows, later, in response to these questions, the individual may well type antimatter or positron into Google to see what he or she can learn.

I believe that physicists underestimate the public’s interest in fundamental physics; that is, physics that tells them how the world works. The physics department at the Washington University in St. Louis sponsors a series of lectures on four consecutive Saturdays in both the fall and spring terms. These lectures, organized by Professor Michael Friedlander, go back many years. Every Saturday, a large auditorium fills with 200-some people. From 10:00 to 11:00 am the audience listens; after 11:00, the people ask questions and the questions go on until the speaker says, “Enough.” The people are fascinated. When Friedlander circulates a questionnaire to find out what people want to hear about, they often say fundamental physics or physics that tells us how the world works. In other words, they want to hear about basic physics–of course, without all the equations. Recent examples of topics requested by members of the audience are the laws of thermodynamics, radioactivity, Bell’s Theorem, Schrödinger’s cat, and Olbers’ paradox.

As a science, physics is fortunate. Basic physics responds to some of the big questions people have asked throughout history: What is time? What is space? How big is space? What are the building blocks of the material world? Are these building blocks unique to Earth? What is light? Where is Earth in the universe? How did it all begin? When did the universe begin? These questions make physics promotable; these questions and more like them, provide physicists with a welcome mat into the minds of the general public.

Many times I heard I.I. Rabi say, “Science exists at the pleasure of the larger public.” Rabi’s remark has meaning at different levels. On the crass level there is money: if elected officials –a vital part of the larger public–do not provide the budgetary support required to advance physical research, then the future of ground-breaking science is problematical. The abandoned SSC is a cogent example. On a deeper level, there are the values of science. If, for example, the larger public does not value knowledge based on experimental evidence, evidence that can be replicated anywhere in the world, then the results of science will frequently be challenged by those with strongly-held beliefs that, unfortunately, often touch the emotions in such a way that they trump hard scientific evidence.

The public has ample reason to find pleasure in the human achievement that brings understanding to our world–the world that all people everywhere call home. This pleasure, however, must be cultivated and nurtured. All existing opportunities to bring physics into the attention of the public must be exploited and new opportunities to inform the public about how physicists understand the natural world should be developed.

The APS Historic Sites Program is a wonderful way, for physics and physicists, to connect with the general public. The subject of physics connects with the public through the plaques themselves. Physicists could connect with the public by using the sites selected by the HSC as points of departure for talks designed for a general audience. On the one hand, physicists could second guess the HSC and challenge its selections. Some physicists would like to do this. On the other hand, physicists could explain to members of their community why the HSC selected particular sites. Why were Rowland’s diffraction gratings, which were coveted by researchers all over the world, worthy of recognition? Almost everyone knows the name Benjamin Franklin, but how many people know that Franklin did some outstanding science?

In the history of physics there are ample examples of experimental and theoretical discoveries that have expanded the conceptual domain of physics, triggered the explorations of new and challenging frontiers, and changed in fundamental ways our understanding of the natural world. Experience demonstrates that this makes physics interesting to the public–the same public on which physics depends. Let us take advantage of this fortunate circumstance.

John S. Rigden served from 2004 to 2009 as the founding Chair of the APS Historic Sites Committee.