A good metaphor can go a long way, especially when it comes to explaining science. But of course, all metaphors eventually fall apart.

Rather than view this as a disadvantage, Felice Frankel sees it as an opportunity. Frankel is a science photographer and holds concurrent positions at the Wyss Institute and Systems Biology at Harvard Medical School and at MIT. She is currently the principal investigator for a program called “Picturing to Learn,” which asks undergraduate students of physics, chemistry and biology to draw or illustrate the concepts they are learning as if they were explaining the science to a high school student. This often requires the use of a metaphor or the simplification of the concept. What Frankel says is most helpful about the illustrations is not seeing the students illustrate the concepts correctly, but finding the concepts they miss or get wrong. This allows professors to pinpoint the concepts the students have missed, and prepare their lectures accordingly.

“You can talk about what the student has drawn and what the metaphor is, but you can also talk about where the metaphor falls apart,” says Frankel. “And I think that also leads to a much deeper discussion about the concepts and a deeper understanding.”

So far, Frankel and the Picturing to Learn program have collected over 4,000 student drawings showing things like bumper cars to illustrate Brownian motion. The program is funded by the National Science Foundation, and the student drawings will be made available online sometime in March.

Physics students aren’t the only ones Frankel thinks could use visual communication lesson. She also leads Image and Meaning workshops, which offer scientists, writers and communicators consultation and training in creating better, more meaningful images to accompany their publications. 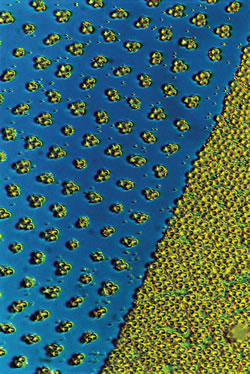 Frankel discussed in her talk at the APS April Meeting in Washington DC that these workshops can help scientists when they are writing articles or books for the public, as well as journal articles or papers for their peers. Separate rules apply to each instance; Frankel says she would never edit anything out of a photograph for a journal, but she might do so in a book for the general public if it made the subject of the photograph more visible or for a journal cover design. However, scientists can still find ways to improve the photographs and other figures they use for journal publications. Frankel uses the example of two photographs she took of self-organizing colloids that arrange themselves in neat rows. The first photo shows the colloids alone, while a second photo show them next to non-self organizing colloids (the image appears in Advanced Materials, Volume 14 Issue 8, Pages 545-548). Members of the audience nodded and voiced agreement that the second image sent the message much better than the first.

“We know how powerful visualizations are,” Frankel said at the April Meeting. “The public swallows them up! But we also know how wrong they can be.”

Frankel is aware that, as she states in reference to the Picturing to Learn program, metaphors fall apart. An illustration of a scientific concept, or a color corrected photo can leave a false or incomplete impression on the audience, so while Frankel strongly encourages scientists to include more images with their work, she also emphasizes the need to educate the public on how those images are created and what they mean. She says the fact that she explains how she generated her images, and any treatment she’s done to them, is what distinguishes her from a traditional artist or photographer.

Despite the challenge presented by translating science through imagery, Frankel says the feedback from the scientific community has been positive, and scientists realize that a good image can be worth a thousand words.

Felice C. Frankel is coauthor with George M. Whiteside for No Small Matter, Science on the Nanoscale (Harvard University Press, 2009).