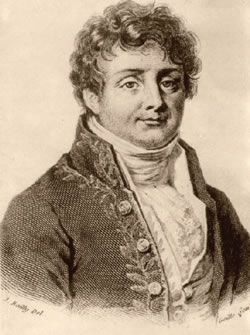 The human ear splits incoming sound waves into their component frequencies through mechanical means by exploiting natural resonances: namely, different nerve endings in our ears are sensitive to different frequencies. But it is also possible to analyze a sound mathematically to determine its component frequencies. This can be done thanks to a method, devised by an 18th century French mathematician named Jean-Baptiste Joseph Fourier, known as a Fourier transform.

Born on March 21, 1768, Fourier was the son of a tailor in the village of Auxerre. Orphaned by age 10, the young Joseph received an early rudimentary education at a local convent, thanks to a recommendation by the local bishop, and he proved such an apt pupil he went on to study at the École Royale Militaire of Auxerre. There he fell in love with mathematics. By 1790 Fourier was teaching at his alma mater.

Revolution was brewing in France. Fourier was sympathetic at first to the cause, drawn by “the natural ideas of equality,” and a hope “of establishing among us a free government exempt from kings and priests.” He joined his local Revolutionary Committee, but soon regretted it, as the ultra-violent Reign of Terror gripped France and thousands of nobles and intellectuals fell victim to the guillotine.

Fourier made the mistake of defending the stance of his own Auxerre faction before a rival sect while on a trip to Orléans. In July 1794, he was arrested and imprisoned for the views he’d expressed on that trip, and found himself facing the guillotine. But with the death of Maximilien Robespierre, the Revolution lost steam and Fourier and his fellow prisoners were freed. Fourier was selected for a new teacher-training school to help rebuild France, where he studied under three of the most prominent French mathematicians: Joseph-Louis Lagrange, Pierre-Simon Laplace, and Gaspard Monge. By September 1795, Fourier was teaching at the prestigious École Polytechnique.

A few years after his academic appointment, he joined Napoleon’s army as a scientific advisor when Napoleon invaded Egypt, engaging in archaeological expeditions and helping found the Cairo Institute as Napoleon’s military fortunes waxed and waned. By 1801, Fourier was back in France, teaching, until Napoleon appointed him prefect in Grenoble. He promptly stirred up a mathematical controversy with his conclusions about his experiments on the propagation of heat.

The culprit was an equation describing how heat traveled through certain materials as a wave. He based his reasoning in part on Newton’s law of cooling: the flow of heat between two adjacent molecules is proportional to the difference of their temperatures. Fourier concluded that every wave-like “signal,” no matter how complex, can be represented by adding together many different waves. In other words, complicated periodic functions–whether continuous or discontinuous–can be expanded and written out as simple waves mathematically represented by sines and cosines.

Fourier completed his memoir, On the Propagation of Heat in Solid Bodies, in 1807 and read it to the Paris Institute on December 21 of that year. The reception was mixed. Both Lagrange and Laplace objected to the notion of what we now call Fourier series: the expansions of functions as trigonometrical series. Along with another scientist, Jean-Baptiste Biot, they also objected to Fourier’s derivation of the equations of transfer of heat. (Biot had written an earlier paper on the topic in 1804, although that paper proved incorrect.)

Nonetheless, when the Paris Institute held a competition on the topic of how heat propagates in solid bodies in 1811, Fourier submitted his memoir for consideration. He won the prize, in part because only one other entry was received. The selection committee (which included Lagrange and Laplace) recorded their reservations in their report: “The manner in which the author arrives at these equations is not exempt of difficulties and… his analysis to integrate them still leaves something to be desired on the score of generality and even rigor.”

Because of the controversy, Fourier’s memoir was not published until 1822, after his election to the Académie des Sciences in 1817, and the same year he became the Académie’s secretary. His work did contain flaws, but it also provided the basis for later work on trigonometric series and the theory of functions of a real variable, most notably the Fourier transform, an operation that turns one function of a real variable into another. It is widely used in digital signal processing, as well as in the physical study of wave motion and optics.

Fourier’s other claim to fame is the discovery in 1824 of the “greenhouse effect”: namely, that certain gases in Earth’s atmosphere could trap heat from the sun instead of having it radiate back into space, thereby increasing the surface temperature of Earth. He was inspired by an earlier experiment with so-called “hot boxes” by Horace-Bénédict de Saussure, in which a wooden box lined with black cork was exposed to sunlight. De Saussure then inserted three small panes of glass into the cork, and noted that the temperature rose in those compartments closer to the center of the box.

However, de Saussure did not have a solid theory for this observed effect. Fourier rightly surmised that Earth gains energy from numerous sources, most notably solar radiation causing an increase in temperature, and that Earth also radiates energy via infrared radiation (which he called chaleur obscure, or “dark heat”), and that a balance must be maintained between heat gain and heat loss. He incorrectly assumed that a significant amount of radiation from interplanetary space contributed to the greenhouse effect, but grasped that the rate of infrared radiation increased with Earth’s temperature. This latter insight was mathematically defined 50 years later with the Stefan-Boltzmann law, further refined by Planck’s law 20 years after that.

Fourier continued to publish papers on mathematics until his death in 1830, when he tripped and fell down the stairs at home. His tomb is in the Père Lachaise Cemetery in Paris, decorated with an Egyptian motif in honor of his position as secretary of the Cairo Institute.