Now is the Time for Scientific Globalization 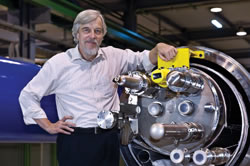 I hate to start with a cliché, but sometimes there’s no better way: the world is getting smaller. Economic slowdowns notwithstanding, the trend is and has for a long time been towards an increasingly joined-up world in which the different regions hold less and less mystery for more and more people. As with all change, there are those who embrace globalization whole-heartedly, and there are those who reject it. The reality is that there are benefits and drawbacks, and as a society it’s the job of all of us to maximise the former and minimise the latter.

Science is without a doubt one of the areas that can profit most from globalization, and that in turn will bring benefit to society. Even in areas that have a long experience of international networking, such as my own field of particle physics, we’re on the threshold of a great opportunity to build deeper partnerships and to better organize our resources for the common good. This does not mean that the vast wealth of local and regional science needs to suffer. On the contrary, all science can benefit from increased coordination. Small projects can be done locally, larger ones on a regional basis, while some will require global partnerships from the outset. What’s important is that all the research be first-class, that our facilities be open to the free-flow of scientists, and that duplication of effort be kept to a minimum. We should ensure that where the science is worth doing, it is done, while being careful to use resources responsibly.

Since I’ve taken up my role as Director-General of CERN, I’ve had many opportunities to work with other labs, and my experience has always underlined my conviction that globalization is right for science. The scientific endeavour is collaborative in nature, and that can serve as a model for other walks of life. Right now at CERN, we are repairing the LHC and making it a better machine. In February this year, we set forth an ambitious plan for getting the machine up and running this autumn. In the meantime, the amount of work that has been done far exceeds what I imagined would have been possible back in February. That’s happened thanks to the unprecedented level of support that CERN is receiving from other labs, notably Fermilab, in preparing the LHC for a restart later this year. And that in turn is due to the long-standing partnerships the world’s particle physics laboratories enjoy.

The LHC work is a very obvious and immediate benefit to CERN, but what I have in mind goes further than simply helping out in time of need. It was recently my privilege to chair the peer review committee on the Canadian TRIUMF Laboratory’s new five-year plan. I found the experience most rewarding, and a valuable learning opportunity. TRIUMF’s plan sees the lab building through partnership on what it has already achieved. Modern laboratories thrive on partnerships, both around the world and across sectors. We at CERN know all about TRIUMF’s commitment to international partnership through the LHC. What the five-year review has allowed me to learn is how the same approach can bear fruit in other areas of our laboratories’ work, exploiting the undoubted synergies that exist between our unique, yet complementary facilities. CERN’s ISOLDE and many of the facilities at TRIUMF are world-class in their own right, but together they’re even stronger.

Globalization is nothing new for particle physics. My field has always worked globally. When CERN was established in the 1950s, the Brookhaven laboratory was CERN’s natural American partner and competitor. Competition was fierce, though not in the traditional sense of the word. Then as now, our objectives were shared and although each lab wanted to be first, the overriding goal was generating knowledge and innovation for the common good. Back then, when Brookhaven scientists developed a new beam-focusing technique, their instinct was to share it with CERN. The result was that our 10 GeV proton synchrotron (PS) became a 25 GeV machine. When the PS started up 50 years ago, Hildred Blewett from Brookhaven even came to CERN to help us commission it. In return, her European experience traveled back with her to Brookhaven, which was just about to commission its own proton synchrotron, the AGS. After the PS and the AGS came a series of competing, yet complementary facilities on both sides of the Atlantic. By the time we reached the end of the 80s and CERN’s LEP machine was running, the size of the collaborations had grown to the extent that one young CERN scientist was inspired to invent a new communication tool: the World Wide Web. And it’s no accident that the first American web site was put up by CERN’s stiffest US competitor at the time, the Stanford Linear Accelerator Center. So yes we’re in competition, but it’s a healthy competition that benefits us all–regardless of where the discoveries and technological advances are made.

There has always been a healthy exchange of particle physicists between the Americas, Asia, and Europe. Particle physicists from around the world have always been welcome at any laboratory with the infrastructure needed for their research. With the LHC, however, this exchange has reached a new level. Just as before, CERN maintains an open door policy and we have over 100 nationalities in our user community. Although originally a European project, the LHC is becoming the global focus for particle physics, and it is safe to assume that future projects of a similar scale will be conceived as global from the start, wherever they end up being built.

To prepare for this future, the CERN Council has established a working group on the geographical and scientific enlargement of CERN. This is, in my opinion, a necessary step for Europe to redefine its role on the global stage. The group will pave the way for CERN to play the role it was created for–coordinating fundamental particle physics research in Europe, and representing Europe on the world stage. In another development, the world’s funding bodies for particle physics have been holding regular meetings for several years now.

It is processes like these that will allow our field to remain healthy on all levels. And what is true for particle physics is, I believe, true for science as a whole. The future of science will be healthiest if there are strong national, regional and global projects, all coordinated on a global scale. Today, globalization is a fact of life, and the scientific community can set an example showing the benefit of working together.

Rolf-Dieter Heuer is the Director-General of CERN, a post he assumed in January, 2009. He had previously been Research Director for particle and astroparticle physics at the DESY laboratory in Hamburg.