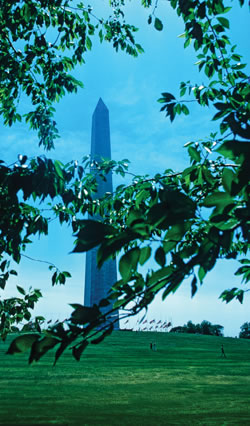 The 2010 “April” Meeting will take place between February 13th and 16th at the Marriott Wardman Park Hotel in Washington DC. Though the meeting usually takes place in springtime, this year’s has been pushed forward to February, to join with the annual Winter Meeting of the American Association of Physics Teachers, which has been moved from its usual January date. In addition there will be a joint plenary session with the National Society of Black Physicists and the National Society of Hispanic Physicists on February 13th.

Including both APS and AAPT, attendance at the meeting is expected to reach about 2,000. Among the major research fields represented are astrophysics, gravitation, particle physics, cosmology and nuclear physics. All told the APS meeting has scheduled 72 invited sessions, 96 contributed sessions, and three plenary sessions.

The meeting will also be a major kickoff event for the yearlong celebration in 2010 marking the fiftieth anniversary of Theodore Maiman’s construction of the first working laser in 1960. To commemorate this historic achievement, APS is sponsoring LaserFest, in partnership with the Optical Society of America and SPIE, emphasizing the history of lasers, their importance in today’s society and the importance of basic science research as a whole. Events planned throughout the year will include traveling shows, public exhibitions, videos, and educational materials for schools across the country. On Monday February 15th, Nobel laureate Theodor Hänsch, director of the Max-Planck-Institut für Quantenoptik in Germany, will deliver a public lecture at the meeting entitled “From edible lasers to the search for earth-like planets –five decades of laser spectroscopy.”

Other meeting events will include a joint APS and AAPT job fair with dozens of potential employers registered to attend. There will also be a special Graduate Student Career Panel and Networking Reception with guidance for students looking to start their careers in the physical sciences. AAPT will be holding a series of workshops aimed at educators which APS meeting participants can also attend. Topics range from improving physics fundamentals for physics teachers, to teaching nuclear forensics and how the Nintendo Wii can be used in a classroom. Costs for these courses range from $35 to $115.

Although the deadline for submitting an abstract was October 23rd, post-deadline abstracts received before December 18th will be assigned space for a poster presentation, dependent on availability. Early registration ends December 11th. Stay tuned to the APS website (www.aps.org) for more details and timely updates.

This year’s three plenary sessions promise to highlight some of the best and most exciting physics research in the country.

At press time, APS is awaiting the invited speakers’ confirmation for the first plenary session. It will be held on Saturday February 13 from 4 to 6 pm.

The second session, scheduled for Monday the 15th from 8:30 to 10:30 am, will feature a talk by the retired Chairman and CEO of Lockheed Martin, Norman R. Augustine. In addition, Judith Lean from the Naval Research Laboratory will talk on “Surface Temperature Responses to Natural and Anthropogenic Influences: Past, Present and Future”  and Naomi Makins of the University of Illinois will speak on “The Nucleon Spin Puzzle.”

At the final session, scheduled for Tuesday the 16th from 8:30 to 10:30 am, William Borucki of NASA’s Ames Research Center will present “Early Results from the Kepler Mission,” John Carlstrom from the University of Chicago will speak on “Cosmology with the Cosmic Microwave Background,” and Rob Roser of Fermilab will talk on “The Search for the Higgs Bosons, and More, at the Tevatron Collider.”