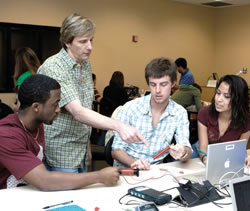 The APS recently received its largest single grant award to date. The society will receive 6.5 million dollars from the National Science Foundation (NSF) to support PhysTEC, APS’s flagship education program since 2001. The project, which APS leads in collaboration with the American Association of Physics Teachers (AAPT), aims to improve and promote the education of future physics and physical science teachers.

PhysTEC’s primary activity is funding institutions to build model physics teacher preparation programs. The new award will provide funding for eighteen new sites to join the fourteen that have already received funding from the project.

PhysTEC institutions have increased the rate at which teachers graduate by up to a factor of 10. Sites have increased teacher recruiting efforts, developed engaging early teaching experiences, improved content and pedagogy courses, and fostered collaboration among physics departments, education schools, and local school districts. Teachers-in-Residence–local master teachers hired with project funds–spearhead many of these efforts, and also provide critical mentoring that helps keep teachers in the classroom.

In the last few years, the project has made major strides in engaging physics departments at research universities in teacher preparation. Laurie McNeil, former Physics Department chair and PhysTEC site leader at the University of North Carolina-Chapel Hill (UNC-CH), says an institution such as hers “rarely considers the preparation of high school teachers to be a central part of its mission…However, especially at a state institution, this often-overlooked part of the mission statement may be among the most visible and valued parts of what external constituencies expect the institution to do in exchange for the public financial support it receives.”

UNC-CH recently graduated its first physics teacher in over a decade, and has several more in the pipeline. Cornell University, Florida International University, and the University of Minnesota, the project’s other three currently funded sites, are all physics doctorate-granting universities, and are also making significant progress in viewing teacher preparation as a legitimate activity for a science department.

In addition to funding nine more traditional sites, the new award will allow the project to provide smaller grants to nine “pilot” sites to implement experimental and innovative programs such as part-time Teachers-in-Residence, four-year physics education degree tracks, and partnerships with two-year colleges. Through these pilot awards, project leaders hope to develop models that are effective at smaller institutions. The project also hopes to provide funding for PhysTEC sites to improve elementary teacher education by implementing research-based curricula in the physical science courses these teachers take.

The new funding will also support research projects aimed at determining the impact PhysTEC teachers are having in the classroom, assessing the sustainability of reforms instituted at PhysTEC sites, and identifying best practices in physics teacher preparation programs around the country. In addition, the award will support the continued development of PTEC—a coalition of institutions dedicated to improving physics teacher preparation—as well as ongoing dissemination and outreach efforts, including conferences, workshops, publications, and activities at APS and AAPT meetings.

In the past few years, PhysTEC has received significant recognition from other leaders in science teacher preparation. According to Michael Marder, co-director of the University of Texas at Austin’s UTeach science and math teacher preparation program, “PhysTEC leads the way in showing universities how to reform their courses and programs to increase the number of physics majors who become teachers. PhysTEC is a model for every scientific discipline that wants to make deep changes in how much students learn in high school.”

In addition to NSF funding, APS has pledged over $2 million of the proceeds from its 21st Century Campaign to PhysTEC. “APS remains committed to PhysTEC and to the goal of educating future physics teachers,” says President Cherry Murray. “We are very pleased to receive this award, which will enable us to continue to lead the physics community in addressing this important issue.”

Ted Hodapp, Director of Education and Diversity at APS, directs the PhysTEC project. He says, “One of the most rewarding aspects of this project is helping physics faculty and their institutions realize their ability to have a significant impact in this area. We are looking forward to supporting a new cadre of physicists who are engaged in these issues. With this new grant, we are particularly looking to target areas and populations of critical need—those students who have traditionally not had access to a high-quality physics education.”