Physics in India – complex problems and a story of great strides 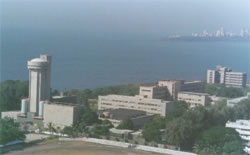 A view of the TIFR campus in Mumbai, located near the Arabian Sea.

Indian scholars have been contributors in mathematics, astronomy, and in certain areas of the physical and biological sciences from ancient times. For complex historical reasons, as J.V. Narlikar mentions in The Scientific Edge, Indian science suffered significantly in the period beyond 12th century A.D. Nevertheless, the nation has seen physicists such as Bhabha, Bose, Chandrasekhar, Raman, Saha, Sarabhai, and many distinguished others. Their academic journey is tied to India’s deep and time-tested commitment to physics education and research during the difficult years of struggle for independence from Britain. Now, nearly 52 years after independence, India is the world’s largest democracy with 28 percent of its 1.1 billion people living in the densely populated urban areas of Mumbai, Kolkata, Delhi, Chennai, Bengaluru (formerly Bangalore), Hyderabad and some 30 other cities with over a million population. India’s per capita income is low, about $1,000 per year with 25 percent of the population below the poverty line, but it boasts a fast- growing economy with steady and near double digit growth rate of the GDP. The country has enormous challenges and incredible opportunities in science education and research. The physics scene mirrors the national mood.

School level science education in the urban slums and in the rural areas of the 28 states, 6 union territories and Delhi involves some 200 million children of ages between 6 and 14. Only about 20% of them achieve acceptable 5th grade level competence. There is an acute paucity of schools and teachers. Education beyond the middle school is often not economically viable. Numerous non-governmental organizations have been involved in addressing these problems. Though the challenges of making such a large population scientifically literate are very formidable, the last 30 years have seen tremendous achievements in science education in rural India due to the pioneering efforts of theoretical physicist Vinod Raina, former Bell Labs scientist Sujit Sinha, and many others.

The 10 million students in India’s colleges and universities constitute a mere 12 percent of the student generation. About 42 percent of this student body comprises of women. With some 18,000 institutions that include colleges, universities, and institutes, India has the largest number of academic institutions in the world. However, India does not have the largest student enrollment. The established university system is stretched thin and often unable to provide incentives to support faculty research. Thanks to the attraction of high-paying start- up jobs in the IT and other sectors, there has also been a steady decline in the number of young entrants into the basic sciences. While India struggles with issues of equity, access and quality at all levels of science education, the investment in school, college and university levels in teaching and research seems to be on an upswing. The openly available National Knowledge Commission report released on May 28, 2008 acknowledges India’s problems and challenges and suggests that appropriate investments, bodies, policies and processes be sequentially introduced to attract and retain talented students in basic sciences. As we shall see below, these investments are already being made.

There are world-class programs for advanced graduate work in physics in research institutes such as the Tata Institute of Fundamental Research (TIFR) in Mumbai, Indian Institute of Science (IISc) and Jawaharlal Nehru Centre for Advanced Scientific Research (JNCASR) both in Bengaluru, S.N. Bose National Centre for Basic Sciences and the Indian Association for the Cultivation of Science, both in Kolkata, and the Institute of Physics at Bhubaneshwar. The Indian Institutes of Technology at Delhi, Kanpur, Kharagpur, Roorkee, Guwahati and Mumbai are highly competitive institutions for undergraduate, graduate and doctoral studies. There are substantial funds for carrying out research. In some cases these funds can be of a magnitude comparable to that in many of the wealthy nations. Faculty and students at these elite institutions have the intellectual capability and the institutional commitment needed to carry out research that is cutting edge by any standards. Physics is a beneficiary of the government’s aggressive investment initiatives in basic research.

Another realization of the new initiative to re-energize India’s academic enterprise has been the recent establishment of the Indian Institute of Science Education and Research (IISER) with planned campuses in Pune, Kolkata, Chandigarh, Trivandrum, and Bhopal and the founding of the National Institute of Science Education and Research (NISER) in Bhubaneshwar. These institutions, some already operational, are following an American model of a university but the focus is on undergraduate and graduate teaching and research in the sciences. The budget per institution exceeds some $80 million per institution per year. The existing university systems are being reformed and the low faculty salaries are being scaled up to make academic life rewarding. University Grants Commission (UGC) affiliated universities such as the Jawaharlal Nehru University in Delhi, Banaras Hindu University in Banaras, University of Hyderabad in Hyderabad are among some of those to become the early beneficiaries of these dramatic changes. The state universities are expected to follow the lead. In short, the opportunities to pursue cutting edge research in physics in India have never been better.

Compared to many wealthy nations, women are reasonably well represented in academia, though it has been difficult for women to garner recognition that is commensurate with their accomplishments. Steps are being taken to address these disparities. The infrastructure is improving rapidly and there is a significant need for faculty to take up positions in Indian institutions. In addition, India has premier national laboratories in Delhi, Pune, Jamshedpur, New Delhi, Pilani and Hyderabad. These laboratories are overseen by the Council of Scientific and Industrial Research (CSIR) and complement the Bhabha Atomic Research Centre in Mumbai and the Raja Ramanna Centre for Advanced Technology in Pune, both run by the Department of Atomic Energy (DAE).

The National Knowledge Commission recommends that instead of the current 350 universities, India needs some 1500 universities.  But such an enormous expansion can only happen over an extended time. There is also a suggestion that sufficiently distinguished foreign universities may be allowed to have some level of operation in India.

US physics has had long standing and significant ties with India: the National Science Foundation (US), the Department of Science and Technology (India), and an independent non-government body called the Indo-US Science and Technology Forum support the institutional links. The Forum is jointly nurtured by the Department of Science and Technology and the U.S. Department of State. The Indo-US strategic partnership includes areas such as energy issues, information and communication technologies, disaster response initiatives, space cooperation, agriculture alliance, and HIV/AIDS issues. The Forum strives to grow catalytic activities, foster collaborations with industry, academia and government in the two nations by funding symposia, workshops and conferences in the frontier areas of sciences and engineering, by supporting visiting researchers, organizing training programs, and providing travel-based support. In collaboration with the Forum, APS has launched a new Travel Grant program to enable both faculty researchers and students from India to perform collaborative research and teaching in the US and vice versa. This new program is expected to help initiate long lasting collaborations between the physics communities in the two nations at a time when both nations can benefit from such partnership in basic research, technology development, and in the global effort to meet the challenges associated with preserving the environment, combating global warming, and in energy research.

Surajit Sen is a professor of physics at the State University of New York at Buffalo and the current president of the American Chapter of the Indian Physics Association.