Letters to the Editor

Where Are the Africans?


I am not a fan of Affirmative Action but I think that there is scientific slavery going on and Africans are the victims. I received a copy of APS News showing more than 30 scholars who won APS 2009 Spring Prizes. Not a single African is among them. The same pattern happens in Africa where all leading researchers: anthropologists, botanists, zoologists, physicists, chemists, astronomers... have European or Asiatic ancestry. Something is wrong with promoting science to Africans or people of African ancestry and I wish I never belonged to APS and other discriminatory scientific organizations. I do not think that Africans are good at playing ball or dancing and singing only.

Those Wacky Chemists of 1886


The letter from Philip B. Allen on “The Real Reason Water is Blue” in the March issue brings to mind an article in a spoof issue of Berichte der Deutschen Chemischen Gesellschaft, published in 1886. The spoof volume was titled Berichte der durstigen Chemischen Gesellschaft, [Reports of the Thirsty Chemical Society (Ed.)] with an annotation “From a beer evening of the German Chemical Society”. One article purported to explain why the ocean is blue and proposed a demonstration for a freshman lecture course. The author described a long tube filled with water, with a complex array of lenses, prisms, and mirrors to project the blue light out to the lecture room. He admitted, however, that the blue color was very faint and might not convince all the students. His solution to that was simple: just drop a few crystals of copper sulfate into the water before the students arrive!


In a Back Page article in the June 2008 APS News, I expressed concerns about APS's, and other  publisher’s, copyright transfer policy. Following up, I would like to say that the changes that APS introduced in their copyright transfer agreement in October, 2008 have largely met my concerns. It now reasonably balances the journal’s interest in being able to control the subsequent republication of an article, with the author’s need to disseminate the results of that research as widely as possible.

I strongly urge all physicists to consider the copyright transfer policies of the journal when they make a decision on where to publish.

While following the usual physicist’s practice, of signing  a restrictive transfer form and then ignoring the obligations of that signing, is a possible course of action, publishing in journals which recognize the author’s interest in the work they created by an enlightened copyright transfer policy (such as The Royal Society of London and the APS) is surely better.


The article on Clyde Tombaugh notes that “he was later known as one of only a few scientists to take UFOs seriously.” He no doubt took them seriously primarily as a result of the fact that he had at least three UFO sightings. Tombaugh also had three sightings of the still-mysterious “green fireballs” seen in the Southwest states in 1948 and 1949, that were also observed and studied by Lincoln La Paz, Founder and Head of the Institute of Meteoritics at the University of New Mexico.

It is to be regretted that it remains true that only a few scientists take UFOs seriously. Unlike the SETI search for extraterrestrial intelligent radio signals, that has no data to report, UFO data are voluminous and many cases (such as the Mansfield, Ohio, case of October 18, 1973, the Council Bluffs, Iowa, case of December 17, 1977, and the Haines City, Florida, case of March 20, 1992) are startlingly impressive. (See The UFO Enigma: A New Review of the Physical Evidence by Peter A. Sturrock, Warner Books, New York, 1999.)

The Air Force based its decision to end its investigation of UFO reports (and NASA based its decision not to start an investigation) on the recommendation of Edward U. Condon, Director of the University of Colorado Air-Force-funded UFO Project (1966-68). Condon’s assertions (Scientific Study of Unidentified Flying Objects, Bantam Press, New York, 1969) that “nothing has come from the study of UFOs in the last 21 years that has added to scientific knowledge,” and that “further extensive study of UFOs probably cannot be justified in the expectation that science will be advanced thereby” were his own views that–to put it mildly–are difficult to reconcile with the case reports and summaries prepared by his own staff (Enigma, pp.18 -44).

In 1997, on the initiative of Laurance S. Rockefeller, a panel of nine distinguished scientists (chaired by Von Eshleman and Tom Holzer) met with eight highly qualified UFO investigators in Pocantico, New York. The panel’s salient conclusions were: (1) The UFO problem is not a simple one, and it is unlikely that there is any simple universal answer; and (2) Whenever there are unexplained observations, there is the possibility that scientists will learn something new by studying those observations (Enigma, pp. 120- 122).

Discovery in Physics Guided by Theory 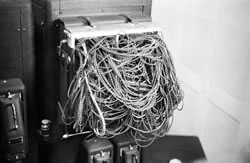 Programmed IBM computer panel used by Alpher and Herman to make final calculations in their prediction of the CMB. (Source:  Estate of Ralph A. Alpher, copyright 2009, with permission of Victor S. Alpher, Executor. Previously unpublished).

I was both gratified and disappointed when I read the March 2009 APS News.

First, I noted Michael Turner’s Back Page article on the importance of physics to the celebration of 400 years of astronomy. Hear, hear! In this same issue, Jay Pasachoff (who taught my first college course in astronomy at Williams College) reminds us of a remark, unfortunately attributed to Einstein by the diligent prankster George Gamow. Gamow reported in his incomplete autobiography that the cosmological constant (CC) was referred to by Einstein as his “biggest blunder.”

Pasachoff points out that we need to take account of the source of this comment—the jolly Gamow, who added Hans Bethe’s name to the publication of my father’s [Ralph Alpher–see “This Month in Physics History, APS News, April 2008 (Ed.)] dissertation on nucleosynthesis, forever clouding its intellectual origins. Pasachoff’s letter invites us, therefore, to reconsider any abandonment of the CC. I would have to agree. I discuss some of these problems in an upcoming paper in the Spring 2009 AIP Journal Radiations. I had the opportunity to discuss the CC on many occasions with my father. Although he recognized well some of the problems with this constant, Gamow (his dissertation adviser) had not passed on news of its folly, and he was not ready to suggest that it be altogether abandoned. In the 1940s, my father was a serious student of Gamow and Einstein, and took courses in physics from the likes of Edward Teller and Enrico Fermi.

Where does this put us today? In his article, Turner lauds the “discovery” of the CMB by Penzias and Wilson. However, their “discovery” was made only in the context of the interpretation made by Dicke, Peebles, Roll, and Wilkinson in the July 1965 Physical Review. Ralph Alpher had been contacted in late 1964 by the Soviet physicists Igor Novikov and Yuri Zel’dovich, who were working on the problem at the time with Andrei Doroshkevich—had much more time gone by, the “discovery” might have been attributed to some Soviet radio astronomer. Physics is not yet ready to abandon the theoreticians, even though their precise predictions may turn out to be off (see accompanying figure). Even the lowly atom was, at one time, a theory.