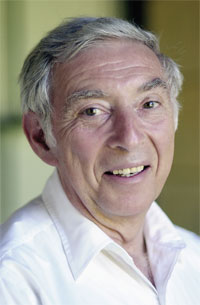 Arthur Bienenstock (Stanford University) assumed the APS presidency on January 1, 2008. In the following interview with APS News, he discusses his priorities for the Society during his presidential year.

Q: What do you see as the most pressing issues facing the physics community right now?

A: Four interrelated issues are the most compelling to me. As you might imagine, the first is research funding. For the past 30 years, inflation-corrected funding for physical sciences and engineering research has remained essentially flat, hurting the physics community and the nation in ways we know well. The President and Congress have clearly recognized the need for significant funding increases, but it is not at all clear that appropriations will follow.

Also extremely important is the state of pre-college physics education. Only about one-third of high school physics teachers have a physics or physics education degree. If this situation is to improve, academic physics departments must work cooperatively with schools of education.

If the nation is to have the physicists and physics teachers we need,  we must increase the number of physics majors significantly, including the participation of women and underrepresented minorities in these professions. The importance of women to the field is illustrated in part by AIP data that indicate that while the total number of people earning physics bachelor’s went from about 5300 in 1972 to about 3700 in 1999 and then rose again to about 5000 in 2004, the numbers for women increased from about 400 to 1200 over the same period. Without the increased participation of women, the decrease from 1972 to 2004 would have been dramatic. Efforts to attract African-Americans and Hispanics have been considerably less successful.

The fourth issue is ensuring that our journals remain viable in the face of movements towards open access. It’s vital to maintain the journals’ peer review and editing systems. Finding financing for them within an open access system is difficult.

These are all endeavors in which the American Physical Society has been active prior to my becoming President, and my intention is to help push them along.

Q: Do you believe that APS has been on the right track in addressing these issues and serving the needs of the physics community?

A: Yes. I think APS is one of the finest professional societies in the world. It has a mixture of enhancing professional communications though its meetings and its journals and a much broader societal outlook that I think is marvelous.

Q: What areas do you plan to focus on during your presidential year? How will you guide APS efforts in these areas?

A: The four issues discussed in response to your first question will get much of my attention. These issues are not, of course, new and the APS has highly capable staff working on them. Mike Lubell and Steve Pierson of the Washington office deal with federal research funding, Ted Hodapp works on the teacher education and diversity issues, Alan Chodos heads our outreach efforts while Joe Serene and Gene Sprouse are concerned with financial impacts of open access for our publishing. I believe the President’s roles are to represent the APS in some of the public aspects of these endeavors, advocate for them within the APS and in the broader community, help to gain additional resources where they needed, and ensure that these issues remain high on the priority list of the busy staff named above.

The 21st Century Campaign for Physics and our alliance with the AAPT are particularly important for the education and diversity efforts.  Much of my attention will be devoted to ensuring that the Campaign is successful in increasing funding for PhysTEC, PTEC and the Minority Undergraduate Scholarships Program, and that the AAPT relationship is enhanced.

As for the viability of the journals, I think that we should consider a future in which a funding mechanism is developed such that the journals just break even. I’ve asked APS Treasurer Joe Serene to study the implications of that for the APS’ other activities.

In addition, there are broader societal issues where physics can provide special understanding. The Panel on Public Affairs (POPA) has been particularly effective in defining and implementing studies that have had significant policy impacts. The three most recent, for example, Challenges of Electricity Storage Technologies, Consolidated Interim Storage of Commercial Spent Nuclear Fuel, and Nuclear Power and Proliferation Resistance have been well-received in Congress, contributed significantly to the debate and raised the status of our advocacy efforts. Other studies are underway, including one on energy efficiency. Clearly, we should continue on this path.

Q: One of the major activities of APS is publishing the journals. How do you view the health of the journals right now? What do you see as the main objectives for the journals in the near future?

A: We publish the best physics journals in the world at the best prices. We should be proud of them.  As I said above, however, I think the biggest issue is how to deal with the increasing forces and opportunities for Open Access. We’ve got to find a viable financial model. That’s going to take a mix of our own planning and influencing public policy.  I think it’s critical that we maintain a valid editing process that includes reviewing. And that’s expensive. Open Access, in the forms that have been suggested so far, hasn’t come to terms with that. We’ve got to find an approach that works.

Q: Is APS doing a good job of serving the needs of its members?

A: As far as I can tell, yes. The meetings and the journals are superb-and the Society keeps trying to improve both.

Q: What do you see as the role of the Society in the international arena?

A: First of all, we must advocate for a return to a situation in which this nation is attractive for international meetings and international facilities. That means constantly working for improvement of the visa policies and practices. In spite of all the improvements that the State Department and Homeland Security have made in the visa systems since the initial reactions after 9/11, there is still a perception around the world that we are not open to visitors–that it is hard to get into this country. Amy Flatten, APS Director of International Affairs, has been working effectively along these lines.

Q: Why did you choose to run for the APS presidential line?

A: First of all, because I was asked. Second of all, because so many of the APS goals were consistent with my own goals. I spoke about how research funding has been a constant issue. I’ve worked on that for 15 or 20 years in one way or another. I have over 30 years of working to increase participation of women and underrepresented minorities. As I said, I recognize the need for improving education at the pre-college level as well as the college level. So the Society’s goals are well aligned with my personal goals, and I saw an opportunity to work with the Society to further those goals.

A: I went to an engineering school, the Polytechnic Institute of Brooklyn. I was turned towards physics by a graduate student, J. Lawrence Katz, who taught freshman physics. I had other goals at the time–I had expected to be the engineer on a kibbutz in Israel–but physics really got me excited. Then in my senior year, I was offered a research assistantship, and for the first time, I worked on a problem where the answer wasn’t known. And I got hooked. Then the excitement of being a physicist just continued through graduate school. I would say the most influential thing was that participation in research as an undergraduate.

Q: Is there a need to attract more people into physics? How can we best do that?

A: Physicists play a variety of roles in the society, including researchers in academia, government and industry, radiation physicists, financial analysts and teachers. In many of these roles, there is a significant shortage. If we are to attract more people into physics, we must work to improve physics education at the pre-college and college levels and increase the number of students participating in undergraduate research experience programs. I’m really pleased to see the expansion of the undergraduate research experience. I have become convinced that we must increase our cooperation with the American Association of Physics Teachers (AAPT) to make this happen. PhysTEC, PTEC and the New Faculty Workshops are all highly regarded programs. We must reach more people with them as the 21st Century Campaign increases our resources for that purpose.