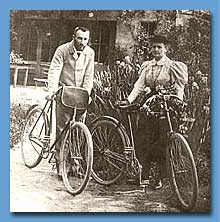 Pierre and Marie Curie shortly after their wedding. 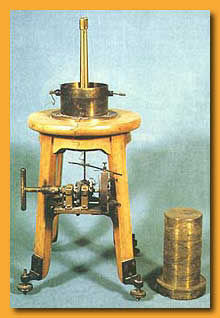 Women physicists were a rarity in the 19th century, but even rarer were husband-and-wife collaborative teams. Pierre and Marie Curie made history not only in that respect, but also because their scientific teamwork led to the discovery of radioactivity and two new elements in the periodic table, for which they shared the Nobel Prize in Physics.

A native of Poland, Marie Curie was born Maria Sklodowska. Her father was a schoolteacher who had lost his prestigious position because of his pro-Polish sentiments at a time when Poland was divided up among Austria, Prussia and czarist Russia.

The family was poor, but her father exposed Marie and all her siblings to the classics of literature, as well as science.

Marie could not enroll at the University of Warsaw; women were not admitted. Instead, she, her sister Bronya, and several other friends attended a "floating university": an illegal night school whose classes met in changing locations to evade the czarist authorities. She worked as a governess for several years, helping pay for Bronya's tuition at medical school in Paris.

Finally, it was her turn. Marie set out for Paris, in the fall of 1891 to pursue studies at the University of Paris' prestigious Sorbonne. Although her math and science background was woefully inadequate, Marie worked hard to catch up with her peers, and eventually finished first in her master's degree physics course, also earning a second in mathematics the following year.

In the spring of 1894, Marie's search for laboratory space led to a fateful introduction to Pierre Curie, a scientist some 10 years her senior who had done pioneering work on magnetism.

The son of a respected physician, Pierre had the benefit of private tutoring as a child, soon demonstrating a passion and gift for mathematics. He earned a master's degree by age 18, and three years later discovered the piezoelectric effect with his older brother, Jacques.

They found that when pressure is applied to certain crystals, they generate electrical voltage, and when placed in an electric field, those same crystals became compressed. They used this effect to build a piezoelectric quartz electrometer to measure faint electric currents, which Marie would use in her research.

Pierre later discovered a fundamental relationship between magnetic properties and temperature. Today, the temperature at which permanent magnetism disappears is known as the "Curie point."

It was Marie who encouraged Pierre to write up this latter work as a doctoral thesis. He received his PhD in March 1895, along with a promotion to a professorship at the Municipal School, and the couple married three months later.

For her own doctorate, Marie chose to focus on the mysterious uranium rays discovered in early 1896 by Henri Becquerel, a few months after Wilhelm Roentgen's discovery of x-rays.

Marie conducted numerous experiments confirming Becquerel's observations that the electrical effects of uranium rays are constant, regardless of whether solid or pulverized, pure or in a compound, wet or dry, or whether exposed to light or heat. She also validated his conclusion that those minerals with a higher proportion of uranium emitted the most intense rays.

And she took those findings one step further, forming the hypothesis that the emission of rays by uranium compounds was an atomic property of the element uranium—something built into the very structure of its atoms. She coined the term "radioactivity" to describe this unique effect, which she also found in thorium compounds.

Intrigued by his wife's findings, Pierre joined forces with her. She had found that two uranium ores, pitchblende and chalcolite, were much more radioactive than pure uranium, and concluded their highly radioactive nature was due to as yet undiscovered elements. As a team, the Curies worked to separate the substances in these ores and then used the electrometer to make radiation measurements to "trace" the minute amount of unknown radioactive element among the fractions that resulted.

They discovered that one fraction was strongly radioactive, so even though it chemically behaved like bismuth, it had to be something new. They named this new element "polonium."

In December 1898, they discovered a second new element in a barium fraction, which they named "radium." To prove to a skeptical scientific community that these were indeed new elements, the Curies had to isolate them. It took Marie over three years to isolate one-tenth of a gram of pure radium chloride, and she never succeeded in isolating polonium because of its very short half-life: 138 days. Even as she was performing her experiments the polonium in her raw material was rapidly decaying.

Their combined work led almost immediately to the use of radioactive materials in medicine, since isotopes are more effective and safer than surgery or chemicals for attacking cancers and other diseases.

Even today, radioactive isotopes are used as "tracers" to track chemical changes and biological processes.

Pierre also quickly realized the potential for radioactive decay for dating materials; the age of the earth was determined to be several billion years, thanks to a study of uranium decay.

In 1903 the French Academy of Sciences nominated Becquerel and Pierre—but not Marie—as candidates for the Nobel Prize in physics. A Swedish mathematician named Magnus Goesta Mittag-Leffler, a member of the nominating committee and an advocate of women scientists,—intervened, and Marie was included in the nomination. The three scientists were honored with the Nobel Prize in December 1903.

Source: Adapted from an online exhibit by the American Institute of Physics: http://www.aip.org/history/curie/contents.htm