Physics and Journalism: Not So Different After All

Each year the APS sponsors two Mass Media Fellows through a program run by the AAAS. This past summer the two APS Fellows were John Veysey and Zerah Lurie. These two articles relate some of their experiences. 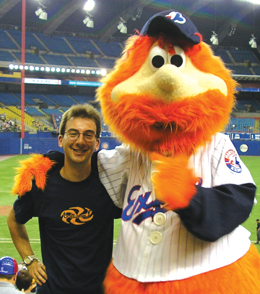 Whenever I tell people that I am studying journalism but I used to study physics, the usual response is "That's quite the change." I have always wondered whether there was a big difference between the two and after spending the summer as one of the APS's two Mass Media Fellows, I can better answer that question.

Getting a couple of physics degrees was, let's be honest, difficult. You have to put in many hours of work where you are looking intensely at different problems in order to find solutions. In physics, you get an idea, or are given a question, and then investigate it until you come up with an answer. But journalism can be a lot like that too.

I spent this summer working at Newsday, a Long Island based daily newspaper that is the 10th biggest in the country. I was the seventhscience journalist there and they put me to work right away. One of the first things they did was tell me that they wanted a story about antibacterial soaps.

I have a background in particle physics. I did my undergraduate degree at McGill and then went to the University of British Columbia where I got my Masters degree working on the BaBar collaboration at the Stanford Linear Accelerator Center. I know, among many other things, the mass of the muon to 4 significant digits by heart. Why did they ask me to do a story about antibacterial soaps?

But I have spent the last year doing a Masters of Journalism degree also at the University of British Columbia and as a science journalist, I should be able to write about all things scientific.

Still, thanks to my background in physics, the way I approach an article is as if my editor just gave me a thesis project.

And what's the first thing you do when you get a thesis project? A literature review.

I took these two statements as my hypothesis and moved on to the next phase; the research. But journalists don't do research themselves and instead I have to interview other people who do. Using a list of sources I found in my literature review, I called up various people and asked about the latest research, looking for evidence to prove or disprove my hypothesis.

The latest research showed that the most common antibacterial agent, triclosan, used in approximately 70% of antibacterial soaps, works using a similar mechanism as antibiotics.

Even though resistance to triclosan has never been proved in the lab, the scientists warned it is only a matter of time. As an experimentalist, I appreciated that the fear is theoretical but this bias forced me to include a representative of the soap and detergent association making the same point.

Then there were researchers from Columbia University who recently did a study following two sets of families, one that used antibacterial products in their homes and one that didn't. The research found no significant difference in the rates of colds and infections between the two groups—pretty conclusive I thought. But, at the same time, the soap and detergent association doesn't claim that these products will make you healthier, but rather that they will kill germs, which no one disputes.

Finally it was time to write the story. I took what I had, added in a couple of facts, like how a survey found antibacterial products control 45% of the soap market, and added a couple of quotes like "society is afraid," from Howard Markel, a doctor and professor of medical history. And that was my final thesis (or article as they call it in journalism). I submitted it for publication and it ran as the cover story for Newsday's health insert on July 20th.

So after a summer of experiences like this, I have decided that physics isn't that different from journalism after all.