Editor's Note: As a registered lobbying organization, the APS advocates for increased support for science, and for other public positions expressed in statements of the APS Council. These activities are strictly non-partisan: we never lobby for particular candidates or parties. Likewise, "Inside the Beltway", appearing bi-monthly in APS News, provides non-partisan analysis and commentary on the Washington scene by the APS Director of Public Affairs, Michael S. Lubell. Sometimes, however, readers take issue with not only Lubell's analysis but also his impartiality. The April column generated a particularly voluminous and vociferous batch of letters. We reprint excerpts from four of them here, along with a reply from Lubell. 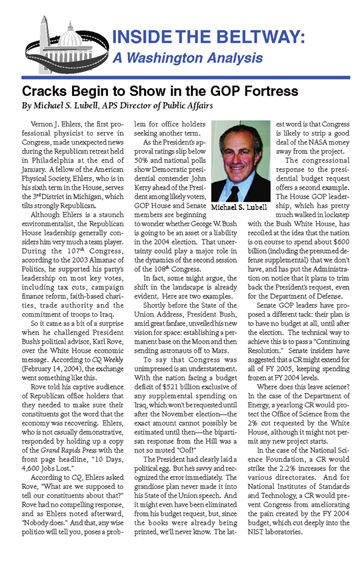 When did APS News become a megaphone for the Democratic Party and other assorted Bush bashers? Michael Lubell turned the April issue into a shallow propaganda sheet with his "Inside the Beltway" column. A thoughtful analysis of Washington trends would indeed serve the interests of APS members, but Lubell's "analysis" is a thinly veiled partisan attack, filled with jabs at the Bush administration but with little else in the way of facts or opinions of anyone other than himself. You can find much of the same at www.democrats.org.

This banal "analysis" isn't worth the paper and ink spent on it. If APS News can't tell the difference between sober analysis and partisan Bush bashing, then maybe it shouldn't publish political articles at all.

I am sick and tired of Mike Lubell practicing partisan politics of any flavor on my nickel. The APS should not be using membership revenue to pay for this. Perhaps the Society should spin off its political arm so that only those who choose to support it may do so. The Office of Public Affairs should be independent of an organization that's supposedly devoted to physics.

I usually value highly the information I get from APS News, but when I looked at the April 2004 issue, I thought I was looking at the Washington Post. Mike Lubell's column, "Cracks Begin to Show in the GOP Fortress," is an unabashed political screed, and I hope it is not an indication that in this political year, APS News has become an organ of a specific political party. The Beltway column is little more but a not so subtle attack on the Republican Party. If Lubell can't refrain from this, or if he can't find material that is pertinent to the mission of the APS, I suggest the APS News editor find someone who can.

Regarding Mike Lubell's article, "Cracks begin to show in the GOP fortress," I was surprised and dismayed to see such a combative attitude in the pages of APS News. I am informed that Karl Rove first "addressed a captive audience," and then that he had "no compelling response" to questions from Congressman Vern Ehlers about job losses. It appears I have no need to know what that response actually was.

I am cynically accustomed to this patronizing attitude in the mainstream press, but in an APS publication, I expect to be given the facts so that I may determine for myself whether they are "compelling" or not. None of us would publish a paper with only analysis and no data. I am very disappointed in this article.

Having been excoriated last month for dissing the Democrats, I am much bemused by the reaction this month to my latest column. Much of what the letter writers conclude is in their own eyes. For the record, I am not a highly partisan Democrat. My political views are without a doubt considerably to the right of the majority of APS members, but I do my best not to reveal them. Apparently I succeeded all too well this time.

My point in the column was that the GOP—which had remarkable achievements last year and had the Democrats off balance—was suffering a change in fortunes. With control of both houses in Congress and the White House, all of which they were managing with political aplomb, Republicans were believed to be a veritable fortress as 2004 opened. That has not proved to be the case. And it has enormous potential consequences for R&D funding, which now accounts for 15% of the total discretionary budget, including defense and homeland security.

With the Republicans put on the deficit ropes by Democratic critics, the outlook for science is not good. Anyone who doubts me should personally ask members of the Republican leadership, or any of the budget appropriators. I have spoken to quite a few of them, and that's what they are saying. I haven't yet spoken to the Democrats, but perhaps I should, and report that information in my next column. That way, I can maintain a certain degree of political neutrality.